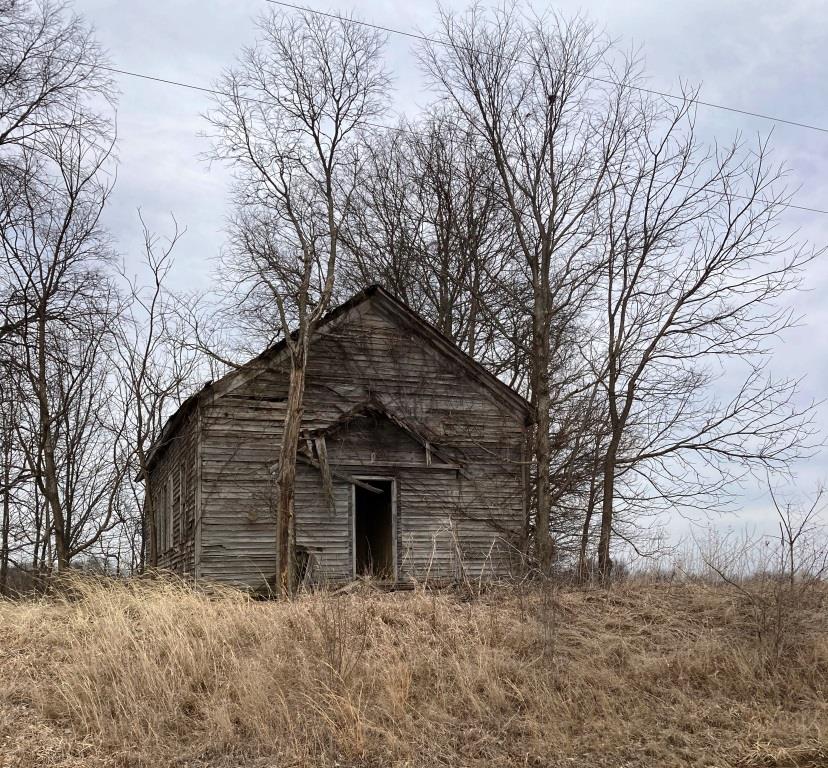 A building that appeared to be the old Rienzi School, which closed in 1948, was still standing in 2022. (SCHS)

This entry has been expanded. See “Hat tips” below.

Sangamon County doesn’t have the kind of ghost towns sometimes portrayed in Western movies. But a variety of vanished or forgotten place names dot the county, each of which tells its own snippet of local history.

When John Carroll Power and his wife Sarah compiled their 1876 History of the Early Settlers of Sangamon County, Illinois, they included a list and map of post offices at the time. Many of those post offices were simply country stores where it was convenient for farmers to pick up mail prior to creation of Rural Free Delivery. About half of the post offices on Power’s list later went out of business. Some of the locales they served have been absorbed by bigger towns, while others changed their names. Some vanished.

The following list of former place names in Sangamon County is based on an article by W.D. Barge, “The Old Towns of Illinois” published in the Illinois State Historical Society’s 1912 Transactions in Illinois History; on Power’s compilation of post offices; and on newspaper archives. However, Barge’s foreword to his list of statewide names probably applies to this Sangamon County collection as well:

In reading the various books containing information of our State, it was noticed that the names of many of the towns had been changed, and that some of the towns had ceased to exist. Many of them were mere town sites, and others were towns under the township organization law. …

The list is NOT complete. It contains errors. … (But) it is hoped that the list will be of service to those who want to know something more of our State. 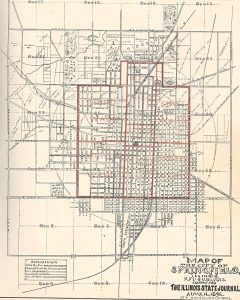 An 1892 map of Springfield shows the suburbs of Ridgely, West Springfield and South Springfield. North Springfield, already annexed, is the rectangular addition to the north city limits that includes the Illinois Watch Factory and Ursuline Convent. (Hat tip: Thanks to Curtis Mann of Lincoln Library’s Sangamon Valley Collection)

The city of Springfield, restricted to “inside the avenues” – North, South, East and West Grand avenues (East Grand became Martin Luther King Drive; West Grand was renamed MacArthur Boulevard) – couldn’t keep up with itself in the late 19th century.

As a result, residents of a half-dozen growing neighborhoods around the city’s edges formed their own municipalities. They mostly adopted unoriginal names, so the original Springfield quickly became ringed by the villages of East, North, South and West Springfield, plus those of Laurel and Ridgely.

Their populations ranged from a few hundred to about 1,500; all were too small to provide basic municipal services like fire protection and sidewalks, not to mention regulate street cars or install water lines. On the other hand, taxes were low, and the village governments were usually able to ban liquor sales and saloons, a major political issue during the period.

The last holdout, East Springfield, was the largest of the suburbs, with 1,500 residents. East Springfield ran from Moffat to South Grand avenues east of East Grand. Voters in the village defeated an annexation proposal by 14 votes in July 1908. A mini-scandal in that election – two East Springfield election judges eventually pleaded guilty to aiding an illegal voter – led to another vote in September 1908. That time, village voters okayed annexation, 192-133, but a judge threw out the results on an election technicality. East Springfield finally approved annexation by a vote of 216-113 in April 1909. Hat tip: Thanks to contributor Mary Frances for correcting SangamonLink’s chronology of the East Springfield annexation effort.

Some unincorporated communities eventually became known as the sites of country schools. Those names, however,  tended to fade after one-room schoolhouses were consolidated into larger school districts starting after World War II.

Among them was Rienzi in the far southeastern corner of Sangamon County, near Lake Sangchris. Rienzi (the name probably came from Rienzi, Miss.) was “vacated” in 1851, according to a contemporary report in the Illinois State Journal (Hat tip: thanks to William Cellini Jr. for additional information), but a schoolhouse existed there until 1948. Again according to the Journal, the building was sold at auction in 1949 to a group of sportsmen, who held fox hunts there for at least a year or two.

This entry was posted in Communities. Bookmark the permalink.