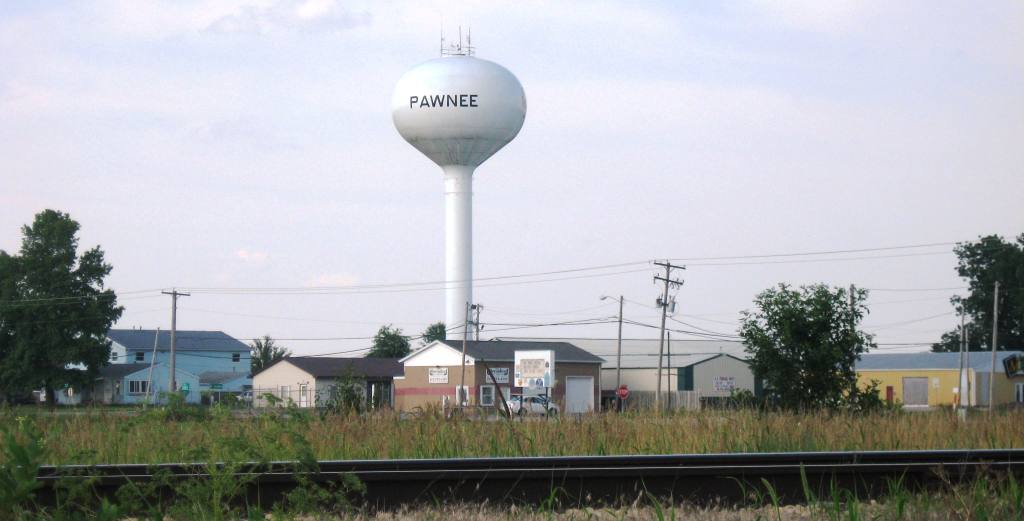 Pawnee Township saw some of Sangamon County’s earliest European settlers, with Justus Henkle apparently being the first in 1818. He was followed by a number of other settlers from St. Clair County. The new families encountered the indigenous Kickapoo and Pottawatomie, but no clashes occurred between them.

The village originally was known as Horse Creek, “so named from the fact that the dead body of a man was found on its banks at a very early day in the winter, and the next spring the horse carcass was found upon its banks which the dead man had ridden,” reports A Pictorial Album of Pawnee, Illinois 1854-2004 by Joyce Reynolds, which is in the Sangamon Valley Collection at Lincoln Library. (The album, which includes the first photo ever of Pawnee, a stereoscopic view that apparently dates from the 1850s, is an exceptionally good photographic history of the community.)

In 1854, however, residents sought to have a post office located there, and postal authorities objected to Horse Creek as a name. Springfield post office employee Charles Keyes suggested the name of “Pawnee.” “It was a popular notion in those times to name things after Indian Nations,” according to the Pictorial Album. “Even though there had never been a Pawnee Indian in Illinois, the Horse Creek community adopted the new name.”

Pawnee’s economy centered on coal mining for virtually all of the 20th century, starting with the Horse Creek Coal Mine, followed by the Victor Coal Co., and finally the Peabody Coal Co. Most Pawnee miners worked first at the Peabody No. 5 mine, then Peabody No. 8 near Tovey. Finally, Peabody No. 10 east of town, which loaded its first rail car in June 1951, was for a while the world’s largest mine. Pawnee’s coal industry ended with the closure of Peabody No. 10 in 1995.

Pawnee’s miners were a melting pot of ethnic groups, often immigrants. In Pawnee, many of them lived in houses owned by Peabody on the west end of town, a neighborhood known as “The Patch.”

Mine automation starting in the 1920s led to the layoffs of half of Peabody’s miners, and a  strike against Peabody in 1932 divided miners themselves, leading to violent conflicts between the longstanding coalfield union, the United Mine Workers of America, and its upstart rival, the Progressive Miners of America.

A brief, well-written history of Pawnee, including the area’s mining industry, is available on the village web site.

More: While many 19th-century communities rose or fell depending on the routes railroad organizers selected for their lines, Pawnee residents took the initiative themselves and built the Pawnee Railroad in 1888. The line first went west to connect to the Illinois Central Railroad and later was extended eastward to reach what is today’s Norfolk Southern Railway. The Pawnee Railroad is considered to be the origin of today’s Illinois and Midland Railroad.

*Dr. Addie Helen Babb (1866-1952), who practiced medicine at the turn of the century in her family home on Galloway road near Pawnee and in Springfield, was known as “Pawnee’s own lady doctor,” according to the Pictorial Album.

*The east side of the Pawnee square burnt down in 1894. And a sleet storm in 1924 put the local telephone company out of business for two years. The Pictorial Album shows the effects of both.

*Joyce Reynolds’ A Pictorial Album of Pawnee, Illinois 1854-2004, at Lincoln Library’s Sangamon Valley Collection provides an unusually good photographic look at Pawnee history. Included is a stereoscopic photo of Pawnee, the first photo ever taken of the village, that apparently dates from the 1850s.