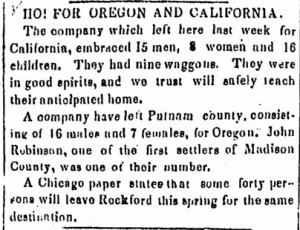 Notice of the Donner Party’s departure, published in the April 23, 1846, Sangamo Journal

The Donner Party left Springfield to emigrate to California on April 14, 1846, but became stranded in deep snow near present-day Truckee, Calif. The group’s experience is remembered today primarily because, before the surviving members of the expedition were rescued, some of the snowbound pioneers reportedly resorted to cannibalism. A plaque on the south side of the Old Capitol Plaza marks their departure point today.

The Donner Party (also known as the Donner-Reed Party) numbered anywhere from 32 to 39 people when it left Springfield, with the nucleus being the families of George and Tamzene (Tamsen) Donner, Jacob Donner (George’s brother) and his wife, Elizabeth, and James and Margaret Reed. George Donner previously had owned a farm near Mechanicsburg. Reed served with Abraham Lincoln during the Blackhawk War and had operated a furniture factory near what is now Riverton. 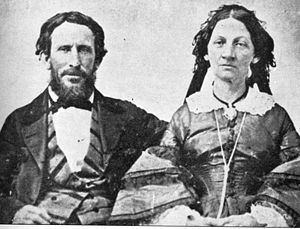 In her 1891 memoirs, Virginia Reed, a daughter of James and Margaret Reed, recalled the company’s departure:

Never can I forget the morning when we bade farewell to kindred and friends. The Donners were there, having driven in the evening before with their families, so that we might get an early start. Grandma Keyes was carried out of the house and placed in the wagon on a large feather bed, propped up with pillows. Her sons implored her to remain and end her days with them, but she could not be separated from her only daughter. We were surrounded by loved ones, and there stood all my little schoolmates who had come to kiss me good-by. My father with tears in his eyes tried to smile as one friend after another grasped his hand in a last farewell. Mama was overcome with grief. At last the drivers cracked their whips, the oxen moved slowly forward and the long journey had begun. … Many friends camped with us the first night out and my uncles traveled on for several days before bidding us a final farewell. It seemed to be strange to be riding in ox-teams, and we children were afraid of the oxen, thinking they could go wherever they pleased as they had no bridles.

A wagon-train trek to California in 1846 was a daunting journey under the best of circumstances, but the Donner-Reed group’s fatal mistake was to disregard warnings and leave the traditional California path to take an untested route known as the Hastings Cutoff. Promoted as a relatively easy shortcut, the Hastings cutoff instead routed the 80-plus pioneers through rugged, ill-marked terrain, much of it desert. 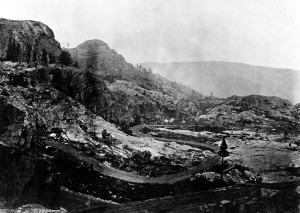 Taking the cutoff cost the party a month’s progress, which meant the group entered the Sierra Nevada Mountains in early November – too late in the year, as it turned out. Strung out along the trail, the Donner Party was forced to stop near Truckee Lake by as much as 10 feet of snow. Hunting was nearly impossible, and many of the group’s horses and oxen, their only other food source, were lost in snowdrifts. The stranded travelers gradually were left with only hides to eat – and then, reputedly, the flesh of their comrades.

A few members of the party struggled through what is now Donner Pass on their own, and a series of rescue parties gradually brought out the last survivor in April. Figures differ, but of the 87 people who entered the pass, only about 48 lived to see Sutter’s Fort.

Those of the original Springfield group who died in the mountains included: George and Tamsen Donner; Jacob and Elizabeth Donner and their sons Isaac, Lewis and Samuel, along with Elizabeth’s son from a previous marriage, William Hook; and Bayless (or Baylis) Williams, Milford (Milt) Elliott, James Smith, Samuel Shoemaker and John Denton. (Sarah Keyes, Margaret Reed’s mother, died earlier, on the trail in Kansas.)

The site of the tragedy now is part of Donner Memorial State Park near Truckee, California. The park contains the Emigrant Trail Museum, and The Donner Camp site at Alder Creek is a National Historic Landmark.

Two popular book accounts are Ordeal by Hunger: The Story of the Donner Party by George Stewart (first edition 1936, updated in 1960) and, in particular, Desperate Passage by Ethan Rarick (2008), which reports on recently uncovered evidence and adds context to the basic horror story.  Michael Wallis’s The Best Land Under Heaven: The Donner Party in the Age of Manifest Destiny (2017) posits that Abraham Lincoln may have been tempted to join the Donners on their trek west.

Documentarian Ric Burns produced a 90-minute film on the Donner Party for PBS’s American Experience in 1992.