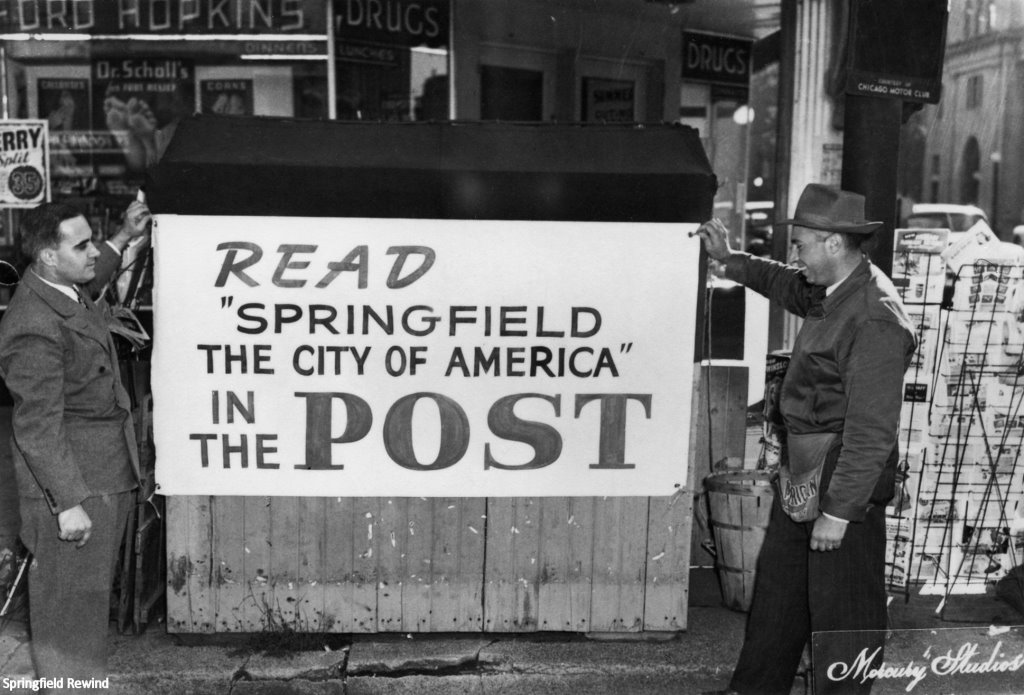 Mitch Shadid (right, with unidentified man) advertised the Saturday Evening Post’s coverage of Springfield at his newstand at Sixth and Monroe streets in September 1947. (Mercury Studios and Springfield Rewind, via Phil Shadid)

Among their many complaints was Morrow’s passing reference to the city’s tolerance for gambling and prostitution.

“Springfield’s vice may be no worse than that of many American cities, but it is more obvious,” she wrote. “Gambling and prostitution blossom like the rose in Springfield. Within the city limits and lining the periphery of the town and county there is what one of the first citizens describes, with inverse pride, as probably the largest collection of taverns, joints, and low dives functioning in any city of less than 100,000 population in the country.”

A year later, however, voters elected anti-vice crusader George Coutrakon as Sangamon County state’s attorney. It turned out that Springfield was ready for reform.

Morrow’s article wasn’t a huge factor in the ensuing cleanup – a blatant gangland murder and a St. Louis Post-Dispatch investigation did the heavy lifting – but publication in the Saturday Evening Post added national embarrassment to the reformers’ arsenal. 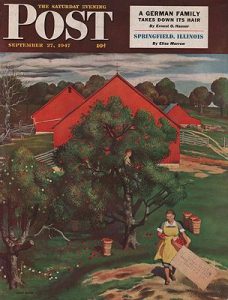 Morrow’s profile was part of a series, “Cities of America,” the Saturday Evening Post published in the late 1940s. The Post, a weekly, at the time was one of the most widely circulated magazines in the U.S. The article on Springfield appeared in the edition dated Sept. 27, 1947 (the magazine actually went on sale in Springfield Sept. 23).

The Sept. 25 Illinois State Journal responded with an almost incomprehensible editorial that suggested the newspaper writer should have spent more time with Morrow’s story and less with his thesaurus:

If the article was intended as an intellectual feast, the garnish of boloney smothered the piece de resistance. Superficialities served to finesse in the interest of prejudice and raucous effect. … The crying down of values extends even to the memory of the immortal Lincoln, whose ever reinvigorated commemoration, the author implies, is born of unkempt stolidity rather than devotion.

Other critics, according to James Krohe Jr., who included Morrow’s piece in his 1976 collection A Springfield Reader, called Morrow a “tramp writer” and a “money-mad woman.”

In fairness, a month later, a better-written Journal editorial conceded that no one had come forward to deny the charges in Morrow’s article. “Beyond the natural resentment expressed locally over the rattling of community skeletons, we may engage in some needed broom work,” that editorial said.

In any case, civic corruption was a relatively small part of Morrow’s investigation of Springfield’s culture and history. She also skewered, for instance, both of Springfield’s signature meals. Local chilli (she noted the idiosyncratic spelling), “to those not especially attuned to the dish … does not taste any different from any other chili,” she wrote. And she called the horseshoe sandwich “indigestible but satisfying.”

(H)e reflected something that exists in Springfield, a wide-eyed and somewhat unfocused devotion to the Great World, and to culture in all its obscure and wonderful forms. Anything weirdly impressive will get a hearing in Springfield.

Morrow was dubious that Abraham Lincoln would have approved of the city as it was in 1947. “Lincoln’s mark is clearly discernible everywhere in Springfield except in its political morals,” she wrote. And while Lincoln left the city with “a sense of security that will never fail,” Morrow found Springfield’s Lincoln traditions unimaginative.

Lincoln’s birthday … is the city’s most dependable diversion. It is celebrated, naturally, with elaborate wreath-laying ceremonies at the tomb, and with banquets and parades. The accompanying address, whether delivered by a distinguished native or a celebrated visitor, is often a dolorous regurgitation of all that is worst in the literature of platitudes. The headlines of a decade’s run of local newspapers for February 12 and 13 read like carbon copies. “Heed Words of Great Emancipator, Senator Urges,” is the general idea. 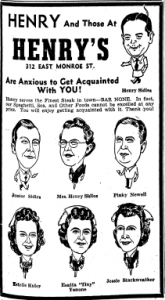 Some aspects of Springfield did look better to Morrow’s eyes, especially Vachel Lindsay, Lake Springfield and Henry’s, a restaurant on Monroe Street that she said put out “some of the best food in town.”

In general, Morrow found Springfield in 1947 to be sleepy, content and skeptical of change. But maybe that wasn’t all bad, she concluded.

If the city lives too much in the past, it is a quality that is charming as well as pernicious, and through it Springfield has been preserved from the flatness and standardized banality of some of the more go-getting Midwestern communities. Someone besides old Abe will have to start working overtime if progress is to replace pleasant living as Springfield’s purpose – and most Springfieldians will tell you that would be a pity.

Online: A subscription ($15 per year) is required to read Elise Morrow’s article on Springfield via the Saturday Evening Post website.

Correction: It was Mitch Shadid, not Woody, who displayed the advertising sign in the photo at top. SangamonLink apologizes for the error.