Gambling and the Sangamon County underworld,1948

The St. Louis Post-Dispatch at the time had a team of reporters who specialized in investigating corruption in downstate Illinois. A Sept. 8, 1948, story by the newspaper’s Springfield specialist, Roy J. Harris Sr., vividly described how mobsters worked hand-in-glove with local police and government officials.

Gambling, which runs the gamut from 10-cent punchboards and dice games, pays off through a “syndicate,” which heretofore has functioned with the smoothness of a well-oiled business organization. Payoffs are collected down to the last dime punchboard, and any board that does not bear the stamp of an approved distributor “would not last two hours,” the writer was told.

Top man in the syndicate setup is Frank Zito, who headed a liquor ring here in prohibition days, and was sentenced to two years in Leavenworth prison in 1931 following his conviction with others in a liquor conspiracy. … At the peak of gambling activities, before operations were curtailed two weeks ago when the “heat” started, payoffs were handled in a regular business-like manner. Gamblers’ representatives made their weekly appearances at an East Jefferson street cafe, bearing payoff money in neat envelopes. On Tuesday of each week collectors for the officials for whom the money was designated picked up the envelopes and quietly departed. Only a knowing observer, acquainted with the individuals and their connections, would appreciate the significance of the visits. 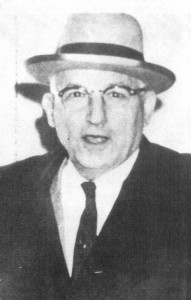 Harris’ tally of gambling enterprises, each of which reportedly had a regular payoff amount, included eight bookie operations, 30 “beat the dealer” games, eight poker games, 50 slot machines, a baseball pool, a standing dice game and the sale of 1,000 punchboards per week.  He also identified four full-fledged casinos — three that paid $250 a week each for law enforcement protection, plus the more prominent Lake Club, whose weekly tab was $500.

Prostitution, “reported to involve about 100 women,” was worth another $500 weekly in bribes, Harris wrote.

The bombshell article in Harris’ series had been published Aug. 11. Harris quoted Sangamon County Sheriff Meredith Rhule as admitting he allowed open gambling in the county. Rhule refused to say whether he was being paid off to do so.

“I’m not a damn fool,” he said. “If I denied it nobody would believe me anyhow. If some night club operator wants to make me a present because he likes the color of my eyes, well, why shouldn’t he?”

When it was pointed out that color of eyes was seldom a basis for gamblers’ gifts to law enforcement officers, Rhule shrugged his shoulders and smiled. “Mind you,” he repeated, “I didn’t say I was taking anything.”

Rhule added that he had not run for office as a “blue nose and reformer.”

“Why, if I were to knock over all the gambling places, the merchants would raise hell, because they believe gambling brings money into the area and helps business. … Right here in Springfield a lot of private clubs, including Legion and other veteran organizations, have slot machines. Does the public want me to take them out?

“Also some of the churches hold a big barbecue every week. … Definitely illegal, but should I raid them?”

The event that precipitated the sudden interest in Springfield-area gambling was the gangland-style murder Aug. 9, 1948, of Leonard Giordano, a Chicago man who had recently been a bartender and “dice man” at the Pad, a gambling den (it was one of the $250-per-week casinos on Harris’s list) just east of the Illinois State Fairgrounds. Giordano’s throat had been slit, after which he was shot.

The Illinois State Journal immediately suggested the killing was “gangster terrorism.” That suspicion was reinforced Aug. 19, when Giordano’s roommate and fellow Pad bartender, Joseph Teresi, was found shot to death, even though Teresi’s death later was ruled a suicide.

Two days after Giordano’s murder, the Illinois State Journal published an editorial whose discouraged tone contrasts sharply with the outrage implicit in the Post-Dispatch’s coverage. The editorial  was headlined “Who Cares?”

Leonard Giordano was not the kind of citizen we particularly desire in Springfield. He was a night club bouncer, gambling shill and tough guy. He had at least one alias, and at least one girl in our city who didn’t seem to mind that he was a family man when in Chicago.

Lenny, as Giordano was known around the Pad, was one of those characters who live by night upon the weaknesses of other men. He moved officiously around tables and behind the bar with the air of a man who belonged. From time to time he would place phony bets on the casino table to stimulate the dice play. He would put the slug on you if given any encouragement.

Lenny’s work day ended around three or four a.m., then he would take his recreation until dawn. After sleeping until mid-day, Lenny would circulate around the bookie joints, downtown, perhaps playing a game of poker in one of the saloons which cluster about Lincoln square and honeycomb every business block. Toward nightfall, as most working men washed up for supper, Lenny would drift out to the Pad to start another night’s routine.

Leonard Giordano was not a big-timer. He was referred to in the trade as a “hood” or a “rod” — a hoodlum or a gunman. He was just one step above “punk” in gangland. that’s why it is thought improbable he was involved with the Shelton gang or other major gambling syndicates. It is very possible that his throat was slit for social, rather than professional reasons.

Among law enforcement officers there is the usual scurrying and posing for news cameras, plus copious public statements concerning the technique of the crime, and the intensity of the investigation. A cynical public somewhat morbidly reads the details of the murder, snorts at the righteous posings and turns to the comics.

Who cares? Apparently no one except the anonymous letter writers who scold the newspapers and pester the preachers. Elections in Springfield and Sangamon county are still won by men who play the political game. The most forceful political action taken by those who oppose political corruption is absence from the polls.

Thus is molded the social context in which murders, rapings, heavy gambling losses and political mediocrity are condoned. Who cares if an occasional throat is slit? Do you?

Probably surprising the Journal’s editors, it turned out that many people’s answer was “yes.” Pressure from ministers, businessmen, and the public forced Rhule and the equally reluctant Springfield Mayor Harry Eielson to order the shutdown of all gambling operations. (Eielson, however, quibbled before ordering  private clubs, such as the Elks, Knights of Columbus and veterans’ groups, to also unplug their slot machines. “These all existed before I came into office. I don’t see why there should be such a big hullabaloo about it now,” he said.)

Reform didn’t happen overnight. Gov. Dwight Green told Springfield ministers in September that state police couldn’t take action against gambling establishments without a request from local authorities. In a news conference after the meeting, however, Green found himself having to deny a Post-Dispatch report that gamblers had contributed $100,000 to his 1944 election campaign.

In October, a special grand jury agreed that the county was home to a variety of gambling operations — the panel identified by name six major nightclubs, four bookies and three punchboard distributors. However, in connection with official corruption, grand jurors said:

(T)his entire investigation was precipitated by reason of certain articles appearing in the St. Louis Post-Dispatch. After a complete analysis of these articles … we are of the unqualified opinion that the aforementioned newspaper articles were derived from information obtained from a witness, or witnesses, who … are unreliable and the principal informant being found to be an ex-convict, having been three times convicted of felonies and one time convicted of murder.

Author Robert Hartley characterized the grand jury’s report in his Battleground 1948: Truman, Stevenson, Douglas and the Most Surprising Election in Illinois History (2013): “In effect, the jury did little more than wag a finger at law enforcement about its responsibilities … and admonish(ed) the public not to believe what the Post-Dispatch published.”

But Hartley added, “Victory over the Post-Dispatch, however comforting, may have been costly with the elections about a week away.”

Coutrakon, aided by his voluble assistant Nelson Howarth, would go on to wage a well-publicized, if not totally successful, battle against countywide gambling. Sometimes leading their own teams of raiders, Coutrakon and Howarth broke up bookie joints, confiscated punchboards and won jail sentences for a variety of local gamblers (though not Zito).

Three days before the April 1950 primary election, the Illinois State Journal’s editorial page was far more optimistic about reform than it had been less than two years earlier:

Sangamon county is clean of slot machines, so far as we know. It is also largely clean of punchboards. Sneak games are rumored from time to time, but in the main the wage earners of Sangamon county are enjoying more durable goods and honest services for their money than ever before. Yet this present situation cannot continue without constant vigilance and intelligent political action by the people of Sangamon county.

Voters who go to the polls Tuesday … must select from long lists a candidate for Sheriff on each ticket. It is vital that the two men selected … cannot be bought and paid for by Chicago, St. Louis or even local gambling lords.

The list of sheriff candidates indeed was long: 14 Republicans sought the nomination, along with 10 Democrats. But Meredith Rhule was not among them. The old state constitution did not allow sheriffs to succeed themselves. (This paragraph has been edited to clarify that Rhule could not run again for sheriff in 1950. Our thanks to commenter David Hagler.) 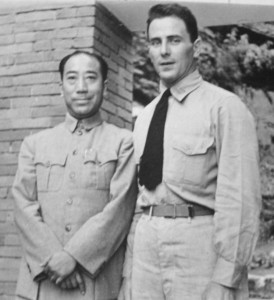 Rhule, a professional wrestler as a young man,  had been a legitimate hero in World War II, organizing Burmese and Chinese guerillas to fight the Japanese as a member of the Office of Special Services. A 1959 movie, “Never So Few,” included a character similar to Rhule — renamed “Tom Reynolds” in the movie — who was played by Frank Sinatra. Rhule died in 1974.

Frank Zito famously attended the 1957 Apalachin, N.Y. conference of Mafia chieftains. Despite that and his general reputation as “Springfield’s godfather,” he had only minor blemishes on his record — the 1930s prohibition conviction and a 1950s tax charge that was settled out of court — when he, too, died in 1974.

George Coutrakon (1906-99) served two terms as state’s attorney. Aside from his anti-gambling crusade, Coutrakon initiated the investigation that led to the embezzlement conviction of Illinois Auditor Orville Hodge. Coutrakon later served eight years in the Illinois General Assembly before being elected circuit judge. He retired in 1977.

As mayor, Howarth is credited with the racial integration of such institutions as the municipal band and swimming pool and breaking down other racial barriers in the police and fire departments and Oak Ridge Cemetery.  Springfield was named an All-America City during Howarth’s administration.

Roy J. Harris Sr. was part of St. Louis Post-Dispatch teams that won Pulitzer Prizes in 1940 and 1948 (in the latter case for coverage of the Centralia mine disaster, not the paper’s gambling investigations that same year).

No one was ever convicted of the murder of Leonard Giordano. Some speculated that Zito had a hand in the killing. However, police said a prime suspect was a St. Louis mobster, James Moncado, whom Giordano reportedly beaten at a nightclub near the Pad a few hours before Giordano was killed. But Moncado himself was shot to death in St. Louis in October 1948.

3 Responses to Gambling and the Sangamon County underworld,1948