Sangamon County has produced its share of poets, but taken together they do not rival Nicholas Vachel Lindsay (1879-1931) for celebrity, achievement, and tragedy. The novelist Mark Harris summarized his views of Lindsay in his introduction to a collection of Lindsay’s poems Harris assembled for publication in 1963:

The life of Vachel Lindsay is so incredible in its details, and so rare an example of the extinct passion to mingle poetry with a programmatic national and religious purpose that we are compelled in the name of our own sane preservation to doubt that he actually lived it.

His friend Edgar Lee Masters wrote, “Lindsay wrote songs for the Illinois country, as Burns had written songs for his village in Scotland. His dreams came out of the Sangamon River country. His classical dictionary was the tales of the prairies and their people.”

Vachel Lindsay (he was known by his middle name) was the son of a Springfield doctor and an artistically inclined mother. He grew up in the family home at 603 S. Fifth St., once the home of Abraham Lincoln’s sister-in-law, Ann Todd Smith, and her husband, Clark, and now the Vachel Lindsay Home State Historic Site. Lindsay studied to be an artist, but ended up painting pictures with words. He tramped across the West, at times trading rhymes for food. He found success with poems that once were staples of the high school anthology — “Abraham Lincoln Walks At Midnight,” “The Eagle That Is Forgotten,” “The Congo.” 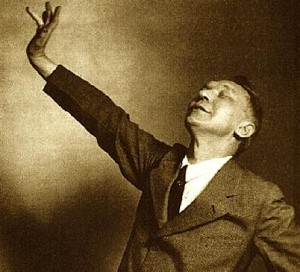 He devised a rhythmic style of poetry designed to be declaimed – what he called, with mixed feelings, the higher vaudeville – and he was its ablest, and (for a while) its most enthusiastic performer. During the mid-teens, Lindsay was a frequent dinner guest of Louis Stevenson, whose household included the host’s high-school son Adlai Stevenson Jr. The sister of the young governor-to-be would confess years later that she found the poet’s readings boring after a while, but Adlai found them absorbing.

In the 1920s, Lindsay’s The Golden Book of Springfield described the city in 2018 as imagined by the members of the Springfield Prognosticators Club. Lindsay was a sentimental leftist, and his future capital is governed according to progressive ideas of thinkers ranging from Emanuel Swedenborg and Alexander Campbell, founder of the Disciples of Christ, to Henry George and Karl Marx.

His city-state is no Utopia — it suffers from drug use, corruption, and prejudice of the sort all too familiar in the Springfield of 1918 — but Lindsay’s Springfield also is a town in which women may vote and artists are valued, traits that were manifestly not true of the Springfield of 1918. The book tells us more about Lindsay than it does about the possibilities of Springfield. Laurence Goldstein astutely notes that the true Golden Book of Springfield “is not the rhapsodic treatise Vachel Lindsay wrote but the life he lived.”

Hailed as a new bard, Lindsay quickly came to be seen a merely a show-biz curiosity. He toured obsessively, got into debt, performed too often and wrote too little. Disillusioned and paranoid, he killed himself at his home in Springfield on Dec. 5, 1931.

Artistically, Lindsay is now seen as a transitional figure, a man slightly behind his own time – Lindsay celebrated small-town Midwestern populism at about the time it was dying out – but ahead of ours. Dan Guillory, emeritus professor of English at Millikin University in Decatur, argues plausibly that Lindsay’s works serve as a precursor to such American road classics as John Steinbeck’s Travels With Charlie and Jack Kerouac’s On the Road. Other critics insist his readings prefigure “Beat” poetry readings of the post-World War II era, although imagining Lindsay – sexually naive and a prude – in the 1950s Greenwich Village requires an imagination at least as vivid as that of the poet himself.

Lindsay’s work forms a curious link between the folk forms of poetry, such as Christian gospel songs and vaudeville, and modernist forms. Critics have complained that the canon of classic poems as endorsed by the culture guardians of the academy excludes work by poets because of their race, class, and gender. But Donald Wesling has argued that Lindsay has been excluded because of the academy’s deep suspicion of “the bardic voice, the sublime chant, the hortatory tone.” One could argue that the academy excluded Lindsay because of its deep contempt for the simple and the sentimental.

What was then radical seems quaint today. Lindsay’s most popular poems praised the founder of the Salvation Army, Gov. John Peter Altgeld, who suffered political martyrdom for his pardon of the Haymarket anarchists in 1893, William Jennings Bryan, anti-slavery radical John Brown, and, of course, fellow Springfieldian and family acquaintance Abraham Lincoln.

Lindsay’s reputation has suffered from changing sensitivities. T.R. Hummer explored that phenomenon in an essay, “The Mystery of Vachel Lindsay,” published by the online magazine Slate in 2011.

In the 1940s, ’50s, and ’60s his work was widely anthologized and taught, until (perhaps) it became embarrassingly apparent that one of his foundational poems, “The Congo,” is undeniably racist (“Fat black bucks in a wine-barrel room,/ Barrel-house kings, with feet unstable”); interest began to cool, until he was evicted from The Norton Anthology, and from many, if not most, classrooms. …

The opening portion of The Congo (“a study of the Negro race”) as delivered by Lindsay, 1931 (PennSound)

However, Lindsay’s image has undergone a renaissance of sorts. It started in the 1970s, an era in which the poet’s optimism and his romanticizing of rebellion found a generation eager for confirmation.

Some of the attention now paid him in his home town may be meant to atone for Springfield’s former indifference, but his new status probably owes more to his being, however fitfully, famous. Whatever their motives, Springfieldians have honored the poet by naming after him a graceful bridge across Lake Springfield, along with a grade school and a residential street. 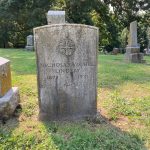 Many visitors to Lindsay’s grave leave pennies or other tokens on the gravestone as remembrances of their visits.

Links to Lindsay works about Springfield

“The Golden Book of Springfield”

“On the Building of Springfield”

“The Wedding of the Rose and the Lotus”

Columbia University lexicologist W. Cabell Greet recorded Lindsay declaiming more than three dozen poems and poem excerpts, including A Dirge for a Righteous Cat (above), in 1931. You can hear them all at PennSound.

City of Discontent by Mark Harris, with a new preface by the author and a foreword by Laurence Goldstein. Reprint edition by the University of Illinois Press, 1992. (Ed: Note that City of Discontent is an “interpretive biography” of Lindsay and his relationship to Springfield.  Although even a local critic of City, Helen Van Cleave Blankmeyer, conceded that Harris handled “a very complex central character with understanding [and] sensitivity,” City of Discontent does not adhere strictly to factual accuracy. It is a work of fiction.)

The Sangamon by Edgar Lee Masters. Originally published in the series The Rivers of America, edited by Stephen Vincent Benét and Carl Carmer, Henry Holt and Company, Inc. 1942. Prairie State Books edition, University of Illinois Press, 1988 with an introduction by Lynd Ward

Uncle Boy: A Biography of Nicholas Vachel Lindsay, available on the Lindsay Home web site, covers Lindsay’s life up to 1912. Lindsay scholar Dennis Camp was working on the book when he died in 2011.

Elizabeth Brown Ide described Lindsay’s local reputation — he was considered “odd” —  to interviewers for the University of Illinois Springfield oral history program in the 1970s.

The University of Illinois Springfield features a selection of material Lindsay created for free distribution at its Special Collections Archive.

. You are free to republish this content as long as credit is given to the Society.