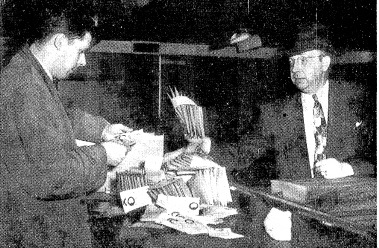 Prosecutor George P. Coutrakon (1906-99) was a strict constructionist when it came to cleaning up vice-ridden Sangamon County following World War II – even when that meant challenging the Catholic church.

Nelson Howarth, who was an assistant to Coutrakon in the state’s attorney’s office, described in a 1988 interview what he encountered when he returned from U.S. Navy service:

The Post-Dispatch reported that the county housed four full-fledged casinos, dozens of smaller gambling operations and 100 or so prostitutes, all of which reported to convicted bootlegger Frank Zito. There was an elaborate system of payoffs, the newspaper said in a story published on Sept. 8, 1948:

Whether bribery was involved or not, authorities had turned a blind eye to gambling, prostitution and organized crime for years. Sheriff Meredith Rhule candidly explained his thinking to Post-Dispatch reporter Roy Harris Sr.: “Why, if I were to knock over all the gambling places, the merchants would raise hell, because they believe gambling brings money into the area and helps business.”

Coutrakon vowed to expand the crackdown, and one of his first steps after taking office was to investigate why the Pad, the tavern/gambling spot on Peoria Road where Giordano had been a dice “stickman,” had been allowed to reopen. The Pad, renamed the Club Bali, eventually was ordered closed.

By then, however, Coutrakon had taken on a more redoubtable gambling operation: the Catholic Diocese of Springfield. In February 1949, Coutrakon ordered police and sheriff’s deputies to question operators of a longstanding weekly bingo game at the “old cathedral” – the former Church of the Immaculate Conception – at Seventh and Monroe streets. Proceeds from the game supported Cathedral Boys High School; more than 1,000 people attended the game the night authorities arrived.

Coutrakon said he had written several county bingo sponsors to warn that they might be violating state gambling laws. He said he received promises to cooperate from all except one – apparently the Catholic diocese.

It is unfortunate that the same puritanical, calvinistic mentality of exclusive righteousness should be threatening to take over the state’s attorney’s office…

If moral righteousness is behind the present drive in Sangamon county … (w)e suggest that a challenge worthy of their zeal is found in practices which are in themselves sinful. If it be the protection of juveniles that is sought, clean up the magazine stands. If it be the protection of the family, enforce the laws against the sale of contraceptives, shout loud against the evil of divorce, and let condemnation replace public silence on abortion, collusion in divorce proceedings, race prejudice and religious bigotry.

The world is burning, the nation totters and they fiddle about bingo games! 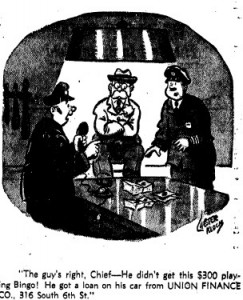 At least one business turned the bingo controversy into an advertisement. (SJ-R)

Coutrakon replied that state law classified bingo, even charitable bingo, as gambling. “Those who desire to sponsor bingo should go to the state legislature,” he said, “and ask that the law be changed – and not ask that I violate my oath of office by not prosecuting gambling.”

With this distraction removed, the office of the state’s attorney can turn its attention to some of the real evils which beset this community. In such endeavor that office will have our fullest cooperation as I have and am again advising them.

Catholics weren’t the only targets of Coutrakon’s enforcement policy – he also shut down Amvets’ punchcard sales and “show bingo” at the Orpheum theater and ruled that “pyramid games” were gambling.

The dispute over charity gaming was a sideshow in the larger anti-vice crusade Coutrakon was preparing to mount. But, coming less than three months into his term as state’s attorney, it demonstrated that Coutrakon would be a by-the-book prosecutor; there would be no exemptions for even influential organizations. (Coutrakon’s own father even closed his Recreation Cigar Store, which had hosted penny rummy games, when his son took office.)

Heat created by the Post-Dispatch series had largely driven commercialized gambling underground before Coutrakon took office. Back-room and basement betting, however, was harder to eradicate.

Coutrakon tried multiple approaches. He gave the sheriff’s office and city police lists of places where gambling was suspected, although he also suggested several times that his office struggled to get cooperation from city officials. Coutrakon sought telephone and telegram records to try to identify bookmaking operations. He called dozens of witnesses to testify in special grand jury investigations of local gambling and vice. And he regularly sought stronger public and law enforcement support for his initiatives. He expressed frustration in July 1949:

In the last two months there has been an increasing stream of callers at my office, mostly wives, fathers and mothers complaining of lost pay checks, unpaid food bills, broken homes and even committed crimes all alleged to arise as a result of gambling…; but in each case the person complaining has been unable to give direct evidence, and the erring husband or son, either through fear or general dislike of being an informer, refuses to give the necessary evidence.

Yet, I am convinced that in back rooms, basements and upstairs rooms there is still a considerable amount of commercialized vice in Sangamon County. Many of the public know it too, but I suppose it is not the primary duty of a citizen to be an informer….

(I)t is apparent to the community that commercialized vice cannot exist even in back rooms if the mayor, the sheriff, and the state’s attorney honestly decide that it shall not exist; but it is equally apparent that no one of these officers can successfully wage the fight alone.

When all else failed, Coutrakon or his assistants went on raids themselves. For example, Coutrakon, Howarth and two city detectives broke down the door of a gaming room in the basement of the Funkhouser Tavern, 413 E. Washington St., in a Dec. 3, 1949 sweep.

Three people were arrested, including one of the operators, who Coutrakon said was stuffing cash and cards into his pockets as the door crashed open. The raiders seized 323 unused punchboards, $490 in cash, 269 betting slips, 11 racing forms, advertising circulars for a Decatur punchboard company, “dope sheets” on basketball and football games, cards, poker chips “and other articles handing in running gambling houses,” the Illinois State Journal reported the next day.

A 1950 raid conducted by another Coutrakon assistant, Robert Oxtoby, led to the arrest of the owner of the Windsor Tavern, 432 E. Monroe St., subpoenas for 20 patrons, and the seizure of “pull tips,” sports pool cards and other gambling and bookmaking equipment.

Although numbers are difficult to compile from newspaper records, it’s clear that Coutrakon targeted dozens of taverns, nightclubs, hotels, smoke shops, pool halls and anonymous gambling rooms during the eight years he served as prosecutor.

Raids were conducted on at least another half-dozen houses of prostitution, some of which were raided more than once. Those charged in the cases included many well-known police characters (among them Merle Hornstein, who was murdered and dismembered along with Basil “Big Bill” Worthington in 1967).

Frank Zito, however, was not among them. He appeared before the county grand jury after the Post-Dispatch stories, but that was prior to Coutrakon taking office. Zito next underwent public scrutiny when he was arrested at a Mafia convocation in New York in 1957, the year after Coutrakon was elected a state representative.

Coutrakon also is credited with overseeing the embezzlement conviction of state Auditor Orville Hodge in 1956. In fairness, however, that investigation was initiated by the reporting of the Chicago Daily News’ George Thieme, and assistant state’s attorney J. Waldo Ackerman was the point man in the probe for Coutrakon’s office.

Coutrakon always conceded that he hadn’t completely wiped out gambling in Sangamon County. At the same time, when he ran for re-election in 1952, Coutrakon asked voters to judge him on his results, not his campaign promises. “If you don’t like Sangamon County the way it is now, if you liked it better four years ago, then vote to put George Coutrakon out,” he said.

Voters never voted out George Coutrakon. He was re-elected with 56 percent of the vote in 1952, went on to win the first of four terms as state representative in 1956, then was elected circuit judge in 1964.

Coutrakon retired from the bench in 1977 and died in Redlands, Calif., in 1999. He is buried in Oak Ridge Cemetery.

Part of George Coutrakon’s law enforcement success no doubt was due to the quality of his staff. Among his assistant state’s attorneys over the years were:

*Robert Oxtoby (1921-97), who became a prominent lawyer, businessman, school board member and philanthropist;

*J. Waldo Ackerman (1926-84), who succeeded Coutrakon as state’s attorney, went on to become a circuit judge and then a federal judge. In addition to the Hodge prosecution, he served from 1968 to 1971 as head of the investigation into the late Secretary of State Paul Powell’s cash hoard.

*Raymond Terrell (1925-99) later was elected state’s attorney himself and then a circuit judge.

This entry was posted in Crime and vice, Local government, Prominent figures. Bookmark the permalink.