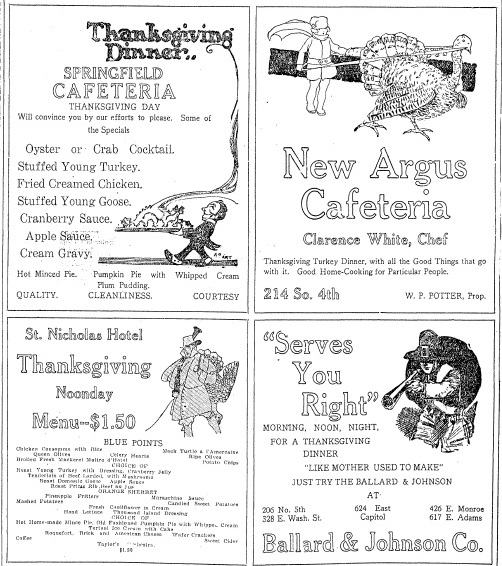 People who could afford to go out for Thanksgiving dinner had lots of choices. (Courtesy State Journal-Register)

Special meals were the order of the day for Thanksgiving 1921 at local prisons, orphanages and homes for the poor, sick and aged. And disabled veterans got a bonus that weekend: an exclusive performance by poet Carl Sandburg.

A look at Thanksgiving festivities a century ago, however, shows how much the social service safety net, especially for children and the elderly, depended on a hodgepodge of churches and private charities. Government programs, which existed primarily at the county level, were a last resort.

Virtually all facilities put in extra efforts for Thanksgiving. But in 1921, newspaper reports suggest, holidays were a happy contrast to daily life in those institutions. The main consolation is that, for most of their residents, life outside must have been worse.

Oranges and B’rer Rabbit kisses, toy balloons, music and games made merry for the little folks of the Home for the Friendless yesterday, so that Thanksgiving for them was a very cheery event.

A dinner with chicken and ice cream and hand made cookies was the feature of the day at noon, and forty little tots sat about the loaded table and enjoyed the dinner thoroughly. The bountiful dinner was largely contributed by generous Springfield people, who had a thought for homeless little ones in the midst of their own Thanksgiving pleasure.

(“B’rer Rabbit kisses” apparently were molasses-based taffy candies; B’rer Rabbit was a popular brand of molasses. The Home for the Friendless, Springfield’s oldest orphanage, housed about 40 children, all of them white, in 1921.)

The Journal also devoted a few paragraphs to Thanksgiving at three institutions for African American children.

Religious services were held in the morning. The program in the afternoon was furnished by the boys and girls of the schools.

(Although known as the Lincoln Colored Old Folks and Orphans Home, the home housed 22 children and only three elderly women in fall 1921. That ratio was pretty consistent throughout the home’s existence.)

Among Springfield’s other homes for orphans and foundlings at the time:

And, the Journal said, “the gloom of spending Thanksgiving day within prison walls was largely lessened” by chicken dinners in the city and county jails, which held 20 and 29 “boarders” respectively.

Meanwhile, the Springfield Woman’s Club had invited Carl Sandburg to Springfield to lecture at the YWCA the afternoon of Saturday, Nov. 26, 1921. It was a coup for the club, since Sandburg was coming off two years in a row in which his poetry collections had won major literary awards, including a Pulitzer Prize in 1919.

Since Sandburg was a military veteran (he served in the Spanish-American War), the Woman’s Club also arranged for him also to do an evening appearance before disabled veterans at two associated rehabilitation and tuberculosis centers, the Open Air Colony at Lawrence Avenue and Chatham Road and the Homestead at Rutledge and Miller streets.

“Whether he lectures, recites his rhapsodic poems, or chants ballads and folk songs to the accompaniment of his guitar, he brings to his audience that sense of the wonder and beauty of life which only the young and poets feel,” the Illinois State Register said in announcing Sandburg’s Springfield appearance.

This entry was posted in Celebrations, Children, Social services, Uncategorized. Bookmark the permalink.