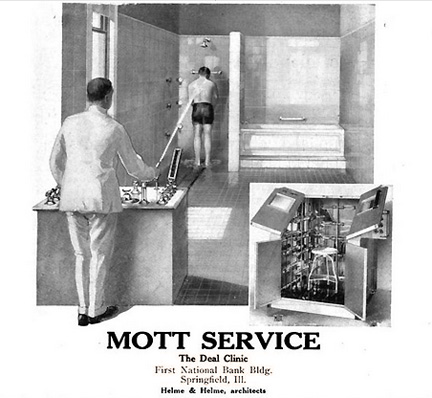 Springfield’s medical establishment “draws from a larger surrounding territory, in proportion to its population, than any other city in the United States,” Deal told fellow members of the Springfield Rotary Club on Sept. 24, 1923.

“This is due to two conditions, namely, the superior hospital organizations and to the high class of men in the professions.”

Statistics backed up his claim, including his calculation that Springfield could boast one hospital bed for every 72 residents, a greater proportion than any other city in the U.S. (In addition to beds in Springfield Hospital – today’s Memorial Medical Center – and St. John’s Hospital, Deal’s numbers included more than 300 beds in two local tuberculosis hospitals and the private Prince Sanitarium, which specialized in eye, ear, nose and throat treatment.)

Deal (1879-1952), a surgeon, and his brother Dr. John Deal Jr. (1885-1961), an ear, nose and throat specialist, were the sons of Augusta (Fyffe) and Dr. John Deal Sr. of Riverton. Don Deal, a graduate of Northwestern University Medical School, opened his medical practice in Springfield in 1906.

Deal’s offices initially were at 205 S. Fifth St. and then in the Leland building at 517 E. Capitol Ave. In the early 1920s, he relocated to the First National Bank building, where his brother John also had offices, and the brothers opened the Deal Clinic.

Deal was a busy man, both professionally and on a social level. He spoke locally and nationally on topics concerning hospital administration, homeopathic medicine, ulcers, hernias and personal health and safety. Springfield newspapers mentioned him often as the referring physician in workers compensation cases, and he occasionally provided medical testimony at trials.

In his talk to the Rotary in 1923, Deal also noted that Springfield offered high-tech (for the time) capabilities for X-ray diagnosis and even radiation treatment for cancer.

These high voltage machines are especially designed to treat non-operative malignant diseases. At times remarkable results on otherwise hopeless cancer cases are obtained. … In addition to two superb X-ray outfits in our hospitals there are two men in Springfield who have radium for therapeutic purposes. Our pathological, bacteriological and chemical laboratories are complete in every detail.

About 1,000 people worked in medical facilities in Springfield in the 1920s, and hospital rates – $6 to $35 a week for room, board and nursing – were among the cheapest in the nation, Deal said.

Deal was convinced, he said, that Springfield could support a medical center “second to no other city of its size.”

It was decades later when the establishment of Southern Illinois University School of Medicine and other local medical advances brought Deal’s vision to fruition.  In the meantime, Deal played roles in a variety of medical initiatives.

When the United States entered World War I in 1917, Deal served as a Sangamon County draft board physician. During the Illinois State Fair, Deal and a staff of nurses maintained an emergency hospital in the south wing of the Exposition Building. The hospital existed from at least 1916 into the early 1930s.

In the mid-1920s, Deal joined a Sangamon County “Control of Cancer” task force. He went on to chair the committee.

“We will endeavor to teach every citizen in the county how to avoid cancer or to treat it if already contracted,” he said. “Hope of cure lies in early treatment.”

During the same period, Deal acted as chief surgeon for the Chicago & Illinois Midland Railroad. He also served from 1929 to 1933 as an elected member of the Springfield Park Board.

Deal suffered a heart attack in the spring of 1949. He recovered after hospitalization, but died in September 1952. He is buried at Oak Ridge Cemetery.