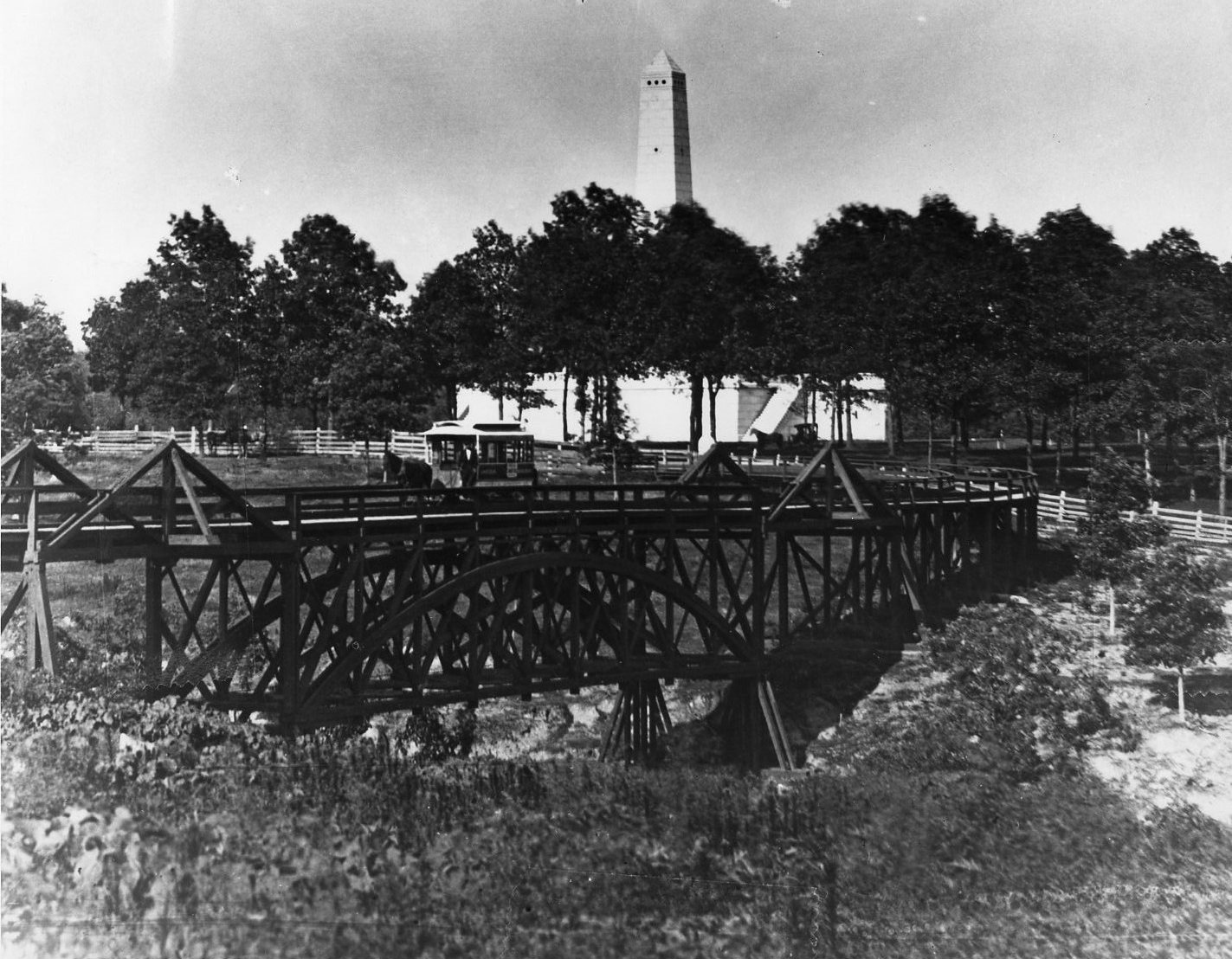 A horse-drawn Citizens Street Railway car leaves Abraham Lincoln’s tomb on its way back to downtown Springfield sometime in the 1880s. The photo shows the tomb before its reconstruction in 1890-91, when the obelisk, visible above the trees, was made 15 feet taller. (Sangamon Valley Collection)

The Lincoln Tomb State Historic Site is a mile-and-a-half from downtown Springfield. That distance isn’t a problem in the 21st century, but it was a considerable obstacle when the tomb was new 150 years earlier.

Distance was a big reason for the so-called “Battle of the Gravesite,” the 1865 dispute between Mary Lincoln and city fathers over where the tomb should be built. The National Lincoln Monument Association, a group of city fathers formed to construct the tomb, wanted Abraham Lincoln buried on the “Mather block,” the site today of the Illinois Statehouse, largely because it was within walking distance of downtown and the train stations that brought visitors to Springfield. Mary was adamant that the tomb be in Oak Ridge Cemetery.

She won the argument. But it took more than a decade and a complicated land deal to give visitors a convenient way to reach the tomb. The credit apparently goes to John Carroll Power, the tomb’s first custodian, to butcher Henry Miller and to street railway entrepreneurs J. Henry Schuck and Frank Reisch.

Carroll wrote about tourists’ early struggles to reach the tomb in an Illinois State Register article published in December 1893.

When I took charge of the Lincoln monument in 1874, the only way of access to it was by carriage over earth roads, two miles north, or by horse railroad out Fifth street to Oak Ridge park (the nucleus of today’s Lincoln Park – ed.), then walk down a long flight of steps, cross a piece of low bottom land in Oak Ridge cemetery and up another flight of steps to the monument. In rainy weather it was practically inaccessible by carriage.

For those coming by street car the low bottom inside the cemetery was a great barrier. At my own expense I laid a walk about 100 yards of loose plank. Without any known cause that plank was more than once taken up and gathered into piles by the superintendent of the cemetery.

I remember one occasion when a party of ladies and gentlemen came by street car just after a rain when the lumber in the walk had been gathered into piles. Before they were aware of it the ladies were so deep in the mire as to pull off their shoes. The gentlemen came gallantly to the rescue and by taking each lady by the arms, they were carried to firm ground. All took the matter good naturedly. In that way they visited the monument.

When originally laid out in the 1850s, Oak Ridge Cemetery took in only 28 acres of land (the cemetery covered about 350 acres in 2022). The surrounding property was privately owned.

In particular, the area north and west of the tomb was the site of at least five slaughterhouses operated by various German butchers. Runoff to nearby Spring Creek was a convenient way to dispose of slaughterhouse waste (in fairness, a surprise inspection by a group of physicians in 1879 found the slaughterhouses “in most excellent condition”).

The butcher whose property was closest to Lincoln’s Tomb was Henry Miller (1825-81), a native of Marburg, Germany. His eight-acre feedlot and slaughterhouse extended to within 100 yards of the monument’s west side. 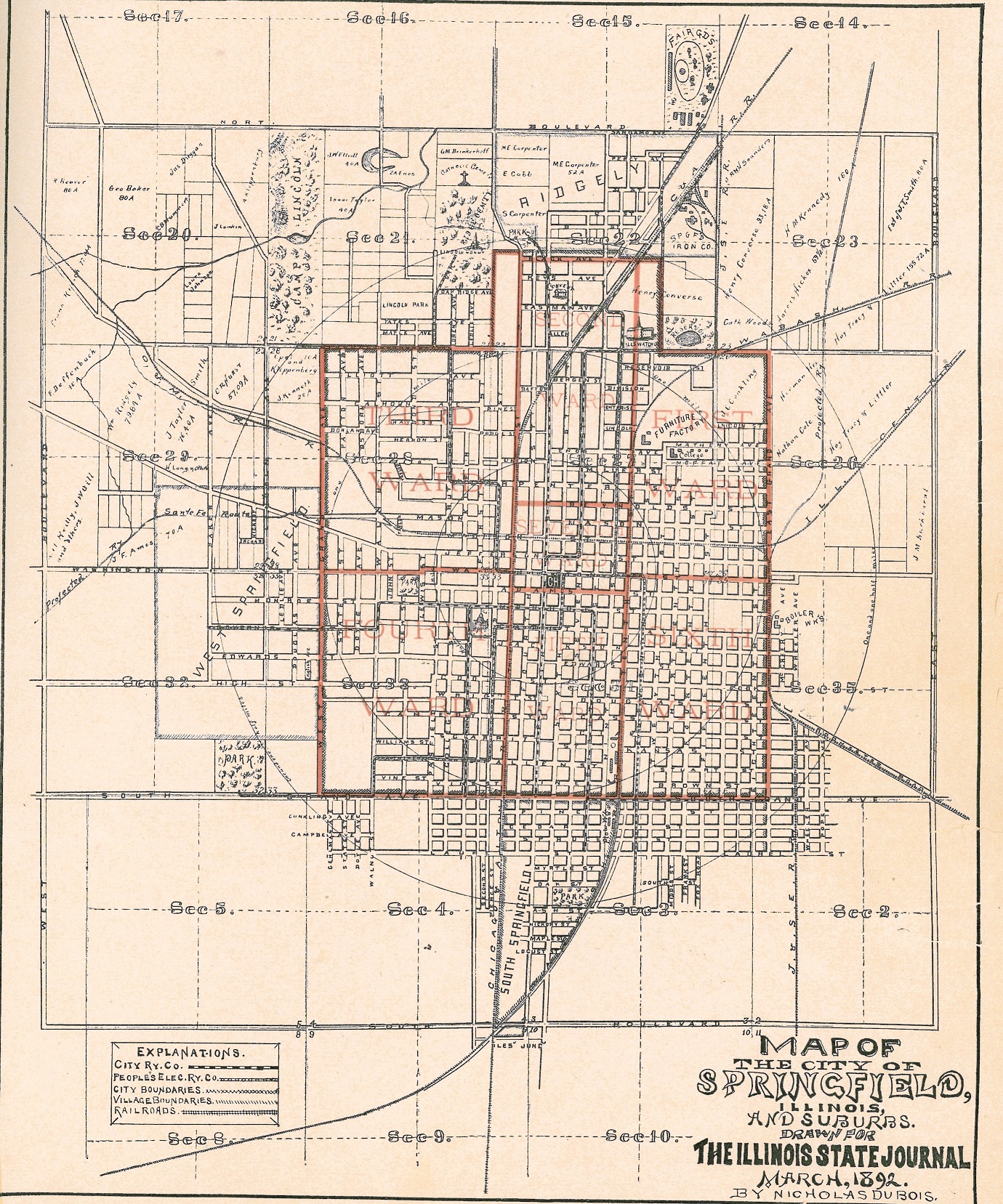 Horse-drawn streetcars first took to Springfield roadways in 1866. Competition for riders grew intense in 1879, when Schuck (1830-1913), Reisch (1842-96) and other local investors formed the Citizens Street Railway, challenging the existing City Railway. That gave Power his opportunity.

Power and butcher Henry Miller were, luckily, “on very friendly terms,” Power wrote in his 1893 article. (Note: Springfield street railway history is complicated. The company Power refers to as “the People’s line” below was originally known as the Citizens railway; it was reorganized and renamed in 1890.)

I went to Mr. Miller, asked the price of the land, and obtained the refusal of it for a limited time. I then went to the directors of the People’s line of railway (and) pointed out to them how they could secure that land, and bring passengers as near the monument as they wished to. This led to the purchase of the land by J. Henry Schuck and Frank Reisch, the building of the People’s line right up to the monument and securing of one acre of land as a donation to the monument association. That land is now very valuable.

From 1880, when the People’s line began to land passengers at the monument, for twelve years until 1892, thanks to J. Henry Schuck, there was no hindrance to visitors reaching the monument, as four-fifths of all visitors came that way.

The street cars ran north from downtown along Second, Carpenter, and Rutledge streets, then jogged west a block to today’s Franklin Street and into the cemetery. The last hurdle was a deep ravine just southwest of the tomb. A 180-foot-long, 48-foot-high timber bridge took the cars across the ravine to end of the line.

“The landing place is on a beautiful knoll, which contains about two acres and a half …” the Illinois State Journal reported the day after the Lincoln Tomb route opened in September 1880. “The Citizens’ Street Railway is one of the instances of business pluck and enterprise on the part of Springfield business men, of which the city has reason to be proud.”

Passengers on that first trip included state and city officials, merchants and other VIPs. The ride took about 25 minutes. A single-trip ticket on Citizens’ streetcars was five cents, six rides cost a quarter, and a regular rider could get a one-month unlimited pass for $3 (this amount has been corrected).

Postscript: Beginning in 1890, electrification caused turmoil in the local streetcar business. In 1893, a Louisville, Ky.-based syndicate bought both the City and Citizens/People’s systems and combined them into the Springfield Consolidated Railway Co.

For a time, Consolidated canceled the last leg of the Lincoln Tomb route, forcing visitors to walk to the monument from North Grand Avenue. That prompted Power, in protest, to write his December 1893 Register article. It’s unclear exactly how or when the dispute was settled, but streetcars were again running to the tomb by no later than April 1895.

Hat tips: The Sangamon Valley Collection at Lincoln Library (Springfield’s municipal library) includes the photo above of the Lincoln Tomb streetcar in its Digital Collections (transportation section). Thanks to SVC director Curtis Mann for alerting SangamonLink to its existence.

Thanks also to Facebook reader Gregory Sanders for pointing out  SangamonLink’s error regarding the price of a monthly pass.