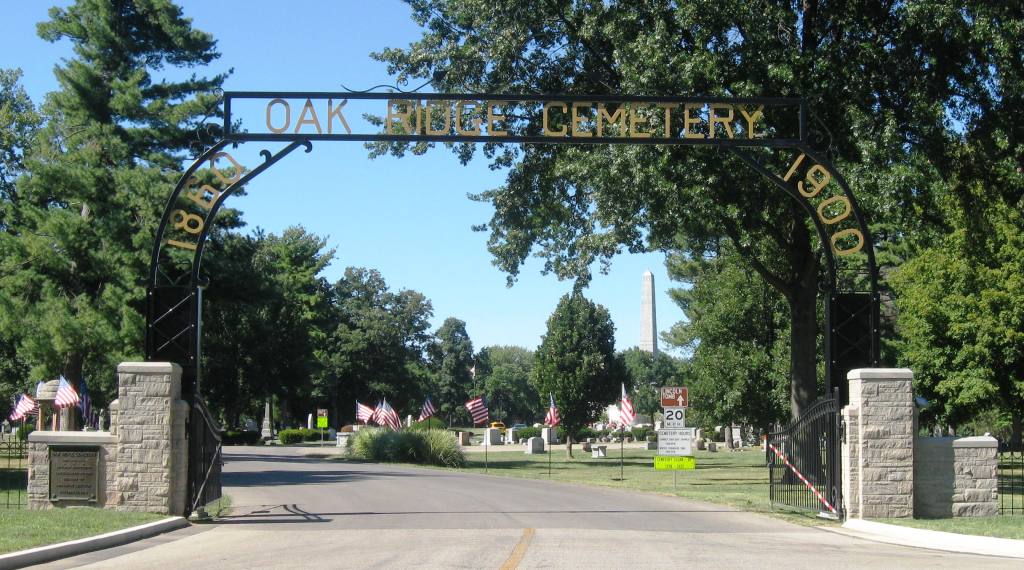 A sense of Conkling’s speaking style — the speech was reported in full, in two page 1 installments, in the May 28 and 29 Daily Illinois State Journal — can be seen in this one-sentence excerpt.

This life is but the chrysalis condition of man, and here we deposit the frail tenement of the soul, but that which constitutes the essence of his being, the immortal spirit, will continue to flourish through eternal ages.

On an inside page, the Daily Journal reported a more homely story from the dedication. Headed “Valuable Dog,” it said:

Presly Donnegan, who presides at the shaving saloon immediately south of the Chenery House, witnessed the ceremonies attending the dedication of Oak Ridge Cemetery on last Thursday afternoon. He was accompanied by his Newfoundland dog. Upon returning to his place of business he discovered that he had lost his pocket book, and with it notes and papers worth five hundred dollars. He went back to the cemetery, and looked carefully for the pocket book, but his search was unsuccessful. When he reached home he said to his dog, “I lost my pocket book this afternoon — you trot off and find it.” The dog gave the matter a brief consideration, and started off as if he was in a hurry. He did not return till after dark, and the book did not come with him. Donnegan again said to him, “You must  find that pocket book; I can’t afford to lose it; don’t come unless you bring it back with you.” So the dog started off again. He returned sometime during the night, with the pocket book between his teeth, and its contents all safe. Donnegan says he had no idea the dog had sense enough to obey his instructions, as no pains had been taken to educate him, and he had never been sent on such an expedition before. Such an animal is worth having.

Plans for Oak Ridge had commenced several years earlier. The previous city graveyard, Hutchinson Cemetery, was located where Springfield High School is today, and city officials wanted to move the burying ground out of town. At the time, the Oak Ridge site was two miles north of the city limits.

“The obvious propriety of burying the Dead without city limits, both as a sanitary measure and also that visitors and processions to the “City of the Silent” may be free from the turbulence and noise of industry and commerce … have determined the city authorities to purchase a tract of 28 acres lying north of the city two miles from the public square,” the cemetery board of managers said in announcing the dedication plans. “They have named it ‘Oak Ridge Cemetery.’ It is a secluded and beautiful retreat — and may become the last resting place of us all.”

Burials began at Oak Ridge well before the dedication — according to cemetery records, the first person buried there, in 1858, was Eliza Helmle, the 7-month-old daughter of Carl and Marie Flesche Helmle. She died of “teething,” the records report. Of the first 250 people interred at Oak Ridge, more than half were younger than 10 years old, according to a 2006 article in the State Journal-Register.

For the dedication ceremony, the city offered carriage rides from the north and west sides of the downtown square “for the accommodation of ladies and gentlemen as far as practicable free.”

The Springfield City Council had set up operating procedures for the cemetery in an ordinance adopted in July 1856. It called for appointment of a sexton, who would live in a house on the grounds, and set rates for burials ($2.50) and rules for graves (at least 5 1/2 feet deep for a “full grown body”).

The dedication was a major event in Springfield, and it’s reasonable to think that, although there’s no proof of their attendance, Abraham and Mary Lincoln were part of the dedication crowd. Lincoln, however, was very busy by May 24, 1860. He had won the Republican presidential nomination less than a week earlier. In fact, New York political boss Thurlow Weed, who had managed the nomination campaign of William Seward, Lincoln’s main challenger at the Republican National Convention, visited Lincoln in Springfield on the very day of the cemetery dedication. Other records for May 1860 show Lincoln spent a great deal of time that month corresponding with a wide variety of friends and political contacts.

Oak Ridge now takes in about 350 acres, and more than 75,000 people are buried there. Largely because it is the site of Lincoln’s tomb, Oak Ridge is believed to be the second most-visited cemetery in the U.S. (behind only Arlington National Cemetery near Washington, D.C.).

In addition to the Lincoln family tomb, Oak Ridge includes memorials to veterans of World War II, the Korean War and the Vietnam War. Two more sites — the Grand Army of the Republic Mound and the Civil War Soldiers Monument — recognize those who served in the Civil War.