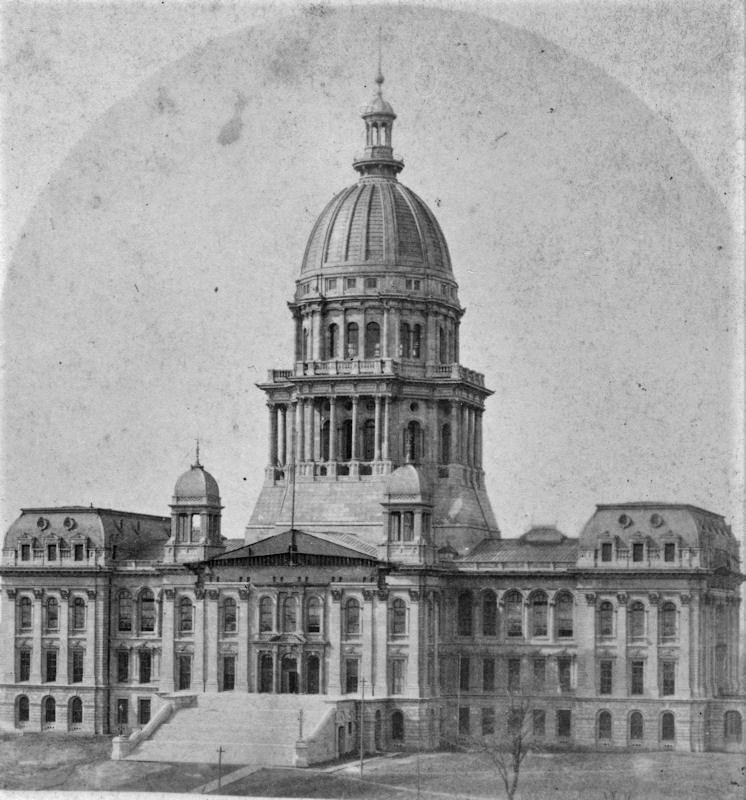 East side of the Statehouse, featuring the “grand staircase,” prior to 1885 (ilstatehouse.com)

For the first decade of its existence, people entering the east doors of the Illinois Statehouse had to stagger up a massive “grand staircase” to the building’s second floor.

That changed in the 1880s, thanks to what was cutting-edge technology at the time: steam-powered passenger elevators. But the job cost the lives of two workmen.

Most state government offices moved into the new Capitol in January 1876, but construction was suspended due to a shortage of funds (see below), and a lot of work remained undone. It wasn’t till a decade later that the state was able to complete the building.

Much of the final work involved interior trim – flooring, statuary and decorations, etc. But the most visible part of the project was the complete revamping of the main entrance, the one facing Capitol Avenue. The “grand staircase” originally took people to the building’s second floor, entering what today is the anteroom of the governor’s office.

The staircase was a makeshift structure all along, the Illinois State Journal reported in March 1885.

“The east steps of the State House were never anything but a temporary structure, built chiefly out of rejected stone,” the newspaper said. “They will have to be removed and replaced with suitable permanent steps laid upon substantial arches.”

The legislative session wasn’t over yet in June, when the Illinois State Register weighed in on the east entrance design.

Since the plan for the new state house was adopted, there has been a revolution in portal architecture, owing to the general use of elevators in public buildings. The massive steps on the east front of the state house are already out of date, and persons entering the building go through a dark tunnel, not fit for a carriage-way. Before completing the porticos, the east steps should be removed.

The projecting porticos should rest on four Corinthian columns, extending to the level of the basement floor. The basement corridors could then be lighted and well ventilated and could also be made attractive entrances. If additional legislation be required, let this be enacted before adjournment, and the commissioners authorized to complete the building accordingly. 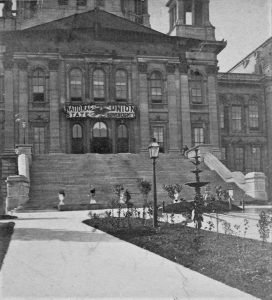 Half of a stereoscope view of the grand staircase, undated (Sangamon Valley Collection)

A Journal retrospective in 1937 said the staircase was removed at the request of “legislators who were wearied of puffing up the stairs.”

“There was a good deal of grumbling about these steps,” that story said.

Whether lawmakers or the Register deserve credit for the idea, the commissioners in charge of the 1880s reconstruction – Jacob Bunn, John Todd Stuart and James Beveridge – agreed to demolish the giant stairway.

“One of the first acts of the commissioners was to change the plans as regards the architecture of the east front of the building,” the Register said in 1886. “(I)nstead of the grand stairs, the entrance will be on the first or ground floor, and the east and north sides of the building will be finished similarly with ten large granite pillars, the bases of which will stand on a foundation at the level of the executive floor and extend thirty-seven feet high.”

“(T)he whole pile, excepting the end walls at the north and south, rested on large parallel brick arches, running north and south from one end wall to the other,” the Journal reported.

The first, or lower arch, just at the foot of the steps, was first uncovered and the bricks taken out. This exposed the east foot of the next arch above, and, at the time of the accident, ten men were at work on top of this second arch, engaged with picks, shovels and bars taking up the morter (sic) and concrete from the top of the next, or third arch. … No one can tell apparently what was the immediate cause of the collapse. It could not have been the removal of the key row, for that work had only progressed a few feet, whereas the arch tumbled in the entire length, from end wall to end wall, and fell to the bottom with a crash, a distance of over 10 feet, carrying down the men with it. …

Patrick Flynn, whose residence was on Adams street between Ninth and Tenth, and who had just begun work yesterday morning, was … found under a great mass of bricks and morter and was crushed and doubled up in such a position that serious spinal and internal injuries must have resulted. He moaned constantly and breathed with difficulty and in less than 15 minutes was dead. He leaves an invalid wife and two grown sons. …

Mike Kinsella, living on South Spring street, not far from Scarrett (sic), and who had also gone to work yesterday morning, was laid on the grass near Flynn. He was suffering from a severe scalp wound and from injuries in the spine. … He was the most seriously injured person among the six who only suffered injury. He was taken direct to his home. Kinsella was for years a section boss on the Chicago & Alton road and is an old citizen here.

Kinsella, who died a week after the accident, was about 50 years old, according to Ancestry.com. Flynn was about 65. Both were Irish immigrants.

The arch collapse wasn’t the only mishap during the project. A fire, thought to have been caused by a candle or perhaps sparks from a workman’s cigar, damaged the north wing of the building the night of Dec. 11, 1886.

“The walls of the room where the fire originated were completely destroyed with all their contents, and the plastering, with its fine frescoed finishing, added to the immense pile of debris covering the floor,” the Journal reported.  The blaze, however, apparently looked worse than it turned out to be, and the damage was almost all repaired before the end of the year. 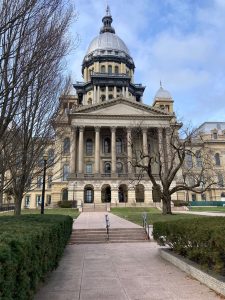 Most references say the Capitol wasn’t complete until 1888, but the bulk of the work clearly was done much earlier.

“The State House is at last practically completed,” the Journal said on New Year’s Day 1887.

Tonight the building will be lighted from the base to the dome, and visitors will be given a chance to inspect the magnificent finish of the capitol. The floors have all been scrubbed and cleaned, and scaffolding, canvas covering and everything removed. The elevators will not be running, nor any of the various departments opened, but all can get a general view of the work which has latedly been done.

The people of the State can well feel proud of their capitol, and although there has been some fault-finding at the delay in its completion, it is probably for the best, as now we have all the latest designs and plans known, instead of a building completed on the style of twenty years ago or more.

‘A Frenchman, with extravagant tastes’

The Illinois General Assembly voted in 1867 to build the current Statehouse, replacing what today is the Old Capitol in downtown Springfield. A Chicago architect, John C. Cochrane, won the contract to design the building, but his associate, Alfred Piquenard (1826-76), did most of the work. Piquenard, a colorful immigrant from France, supervised construction until his death.

The 1870 Illinois Constitution, however, included a provision that limited the budget for building the Statehouse to $3.5 million. Any additional amount had to be approved by voters in a referendum. Construction was still under way in 1876, when the Capitol’s builders hit their $3.5 million limit. A state Senate investigating committee in 1877 blamed that circumstance largely on Piquenard. The committee said:

(J)ustice to the present Commissioners demands the statement that for several years Mr. Cochrane has had but little to do with the building. Owing to the fact of Mr. Piquenard being dead, your committee feel a great delicacy in criticising (sic) his conduct, and would entirely refrain from any reference to him did not justice to all imperatively demand it. He was a man of genius and eminent ability in his profession, but he was a Frenchman, with expensive ideas and extravagant tastes, and prosecuted his work on the State House with an utter disregard of expense.

Voters rejected attempts to increase the construction budget in both 1877 and 1881, but a third attempt, authorizing up to $531,700 worth of work, succeeded in 1884.  Chicago architect William W. Boyington completed Piquenard’s project, including rearrangement of the Capitol Avenue entrance.

The east entrance to the Statehouse did face Capitol Avenue in 1885, but it didn’t when the Capitol was first built. Capitol Avenue originally was named Market Street. The name was changed during the first round of Statehouse construction.

Springfield newspapers refer to the alteration only in passing. The last item in a roundup of city council “new business” published in the Nov. 21, 1876, Illinois State Journal mentions an order “Proposing changing the name of Market street to Capitol avenue.” No action seems to have been taken, however, and that led to a period of apparent confusion about which name to use.

When Gov. Shelby Cullom was inaugurated on Jan. 8, 1877, the Journal was careful to say the inaugural procession would travel “by way of Sixth street and Capitol avenue (formerly Market street).” However, both “Market Street” and “Capitol Avenue” appeared for months more in newspaper stories and advertisements – including ads published by the city itself.

Based on the newspaper accounts, the city council apparently didn’t take a final vote to adopt the new name until Sept. 3, 1877.

Springfield newspapers refer to the change only in passing. The last item in a roundup of city council “new business” published in the Nov. 21, 1876, Illinois State Journal mentions an order “Proposing changing the name of Market street to Capitol avenue.”

No action seems to have been taken, however, and that led to a period of apparent confusion about which name to use.

When Gov. Shelby Cullom was inaugurated on Jan. 8, 1877, the Journal was careful to say the inaugural procession would travel “by way of Sixth street and Capitol avenue (formerly Market street). However, t both “Market Street” and “Capitol Avenue” appeared for months more in various newspaper stories and advertisements – including ads published by the city itself.

Based on the newspaper accounts, the city council apparently didn’t take a final vote to adopt the new name until Sept. 3, 1877.