Dr. George Kreider “hates quacks as the devil hates holy water,” the Illinois State Register said in 1884, but he almost met his match in an 87-foot tapeworm.

George N. Kreider (1856-1922) was a leader among Springfield physicians in the late 19th century. Born in Ohio, he grew up in Jacksonville. After studying in Ohio and New York, he opened a medical practice in Springfield in 1880.

He wasted no time in calling for local doctors to organize themselves, both to educate themselves on modern disease treatments and to lobby for stricter rules against medical fraud, a serious problem at the time. When a dozen physicians decided in 1881 to create a group specifically for young Sangamon County doctors, Kreider was the first person to sign the organizing petition. He presented papers to medical groups on conditions like trichinosis and dislocated shoulders and hosted a “microscope soiree” (he owned five) for physicians who came to Springfield for a meeting of the Mississippi Valley Medical Society in 1884. 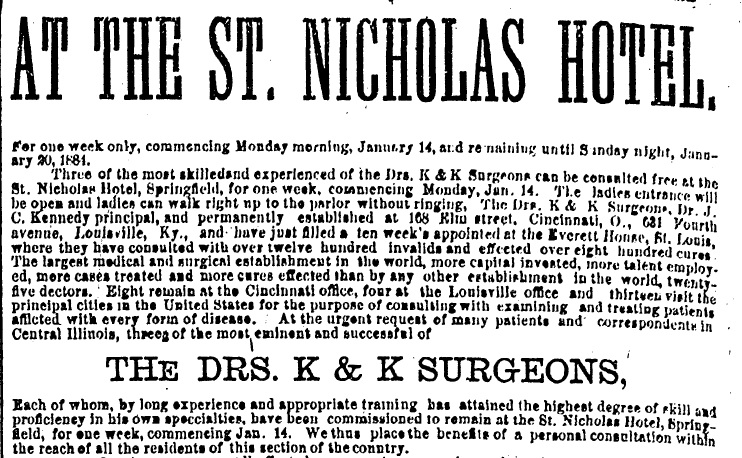 The beginning of a “Drs. K and K Surgeons” ad published in the  Jan. 15, 1884, Illinois State Journal. Newspaper ads were the key to K&K’s hit-and-run medical treatment. (Courtesy State Journal-Register)

Kreider was an inspector for the Illinois Board of Health in January 1884, when the “Drs. K&K Surgeons”, an itinerant three-man medical team, set up temporary shop at the St. Nicholas Hotel. The “surgeons” were among two dozen purported physicians employed by a Cincinnati company that dispatched similar teams to cities around the Midwest.

Newspaper ads made extravagant claims for the K&K operation:

At the urgent request of many patients and correspondents in Central Illinois, three of the most eminent and successful of The Drs. K & K Surgeons, each of whom, by long experience and appropriate training has attained the highest degree of skill and proficiency in his own specialties, have been commissioned to remain at the St. Nicholas Hotel, Springfield, for one week. … We thus place the benefits of a personal consultation within the reach of all the residents of this section of the country. …

We have effected cures where many of the most skilled physicians have failed, hence our large and increasing business, the result of past success.

Only a day into their stay in Springfield, K&K Surgeons aroused the suspicion of the city’s resident medical community with their announcement that they had cured a local man of his “strange and unusual malady.”

According to a K&K advertisement, the man – an unidentified “old resident … living on Eighth Street” – had suffered from a variety of symptoms for nine years. After consulting doctors in Springfield and elsewhere with no relief, the ad said, the man decided K&K Surgeons were worth a try.

“A single dose of medicine was administered, and before night a ‘monster’ tapeworm 87 feet long was expelled,” the ad said. “It is needless to say that the gentleman is overjoyed at this prompt relief and feels once more a ‘well man.’” K&K Surgeons added that they had preserved 40 feet of the tapeworm in alcohol for viewing by anyone who visited their suite at the St. Nick.

A few days later, K&K Surgeons reported treating a second gargantuan tapeworm. This one was 45 to 50 feet long, and that sufferer was identified: John Silva, a carpenter who lived at 1405 E. Washington St. “My dealings with these surgeons satisfies me that they are true gentlemen and scientific physicians,” Silva said in a statement K&K published. (The Mayo Clinic confirms tapeworms can reach more than 80 feet in length.)

Whatever the truth of K&K Surgeons’ tapeworm claims, Dr. John H. Rauch, the state health board secretary, went to court Jan. 18 to accuse one of the K&K medicine men, H. Ralls Smith, of practicing medicine without a license. The case was dismissed after Smith swore under oath that he had been a physician since 1849, meaning he was exempt from state licensing standards first imposed in 1877.

The Springfield Medical Association, headed by George Kreider, immediately filed a new complaint against K&K, accusing the operation of circulating literature “containing indecent language and pictures” (that referred to a pamphlet, “Guide to Health,” that K&K apparently distributed). That complaint also was dismissed after the three K&K doctors said they weren’t involved in that part of the business.

The Illinois State Journal and Illinois State Register, both of which profited from K&K Surgeons advertising, generally took K&K’s side in the dispute. The Register, reporting on the original charge against Smith, treated the case lightly.

The Eighth street tapeworm was lugged into court by the prosecution, and the doctor said that he knew nothing about his snakeship, as he had not been concerned in his capture.

K&K reveled in the publicity. “This malicious prosecution has been directed against us simply because we hold advanced ideas in regard to the practice of medicine, but it does not diminish the confidence of the people in our skill,” a response ad said, “for when the doctor (Smith) returned from the court his rooms were crowded with patients waiting to consult him.” Because of the demand, K&K said, it was extending its stay in Springfield for an extra day.

Despite their failure to immediately shut down the K&K Surgeons operation, Kreider and the regular medical community won in the end. That May, a circuit judge convicted another K&K surgeon, C. Buell Rice, of practicing medicine without a state certificate. In the process, the judge upheld the Illinois Board of Health’s authority to look into an applicant’s “moral and professional character.”

According to a Board of Health report on the case:

On the part of the prosecution, it was shown that charges had been presented to the Board, alleging that Rice was in the employ of, and associated with the “K and K Surgeons,” a firm of advertising quacks of Cincinnati and elsewhere, and that, in various ways connected therewith … his conduct was unprofessional and dishonorable. …

(T)his last representative of the “K and K Surgeons” has left the state. 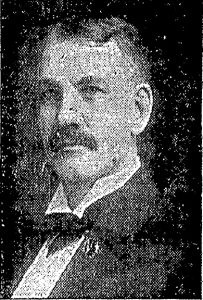 George Noble Kreider was appointed a full member of the Illinois Board of Health in May 1884, just in time to enjoy the board’s victory over C. Buell Rice and K&K Surgeons. It was merely an early highlight in what became a highlight-studded medical career.

Despite an unpromising start – he once told a friend that his first year of practice in Springfield earned him a total of $73 – Kreider amassed a remarkable list of medical and professional distinctions.

Locally, he served as president of the Springfield Medical Club and initiated creation in 1899 of the Sangamon County Medical Society, which elected him its first president. Kreider also was a member of the Springfield Board of Health from about 1887 to 1896.

Kreider was elected treasurer of the Illinois State Medical Society in 1891, a post he held until when his election as the ISMS’s president (1900-01). In 1899, Kreider persuaded ISMS delegates to begin publishing a journal every month instead of annually, and he edited the Illinois Medical Journal from its first issue in July 1899 until 1913.

Kreider was a visiting surgeon at St. John’s Hospital for 30 years, where he introduced European antiseptic procedures to the Springfield medical community. He also was in charge of the Wabash Railroad Employees Hospital in Springfield from 1891 to 1903 and held a variety of medical positions with the Illinois National Guard. According to the History of the Kreider and Pasfield Families (2020) by Sarah Thomas and Fred Slocombe, Kreider also wrote 28 articles for medical publications between 1895 and 1920.

Hat tip: Thanks to Sarah Thomas for bringing Dr. George Kreider and the History of the Kreider and Pasfield Families to our attention. More information on the Pasfield family is here.

1 Response to Tapeworms and medical fraud, 1884