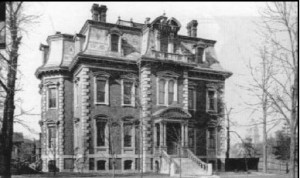 Wabash Railroad employees injured on the job were brought to Springfield for treatment from 1884 to 1902 at a hospital dedicated to them.

The infirmary was established in the former James Conkling mansion at Sixth Street and Lawrence Avenue.  The hospital, the first operated by the railroad east of the Mississippi River, was maintained by contributions from all employees of the Wabash.

“A familiar site thirty years ago was the horse-drawn ambulance which jogged down to the station to meet every Wabash passenger train,” according to a 1928 newspaper article. “The hospital contained fifty beds and generally was taxed to its capacity.”

Despite protests from Springfield city fathers, the railroad moved the hospital to Decatur in 1902. The Catholic Diocese of Springfield bought the property, and St. Joseph’s Home for the aged opened there in 1903. When the diocese constructed the Cathedral of the Immaculate Conception in the 1920s, the bishop’s home was built on the site of the former railroad hospital.

This entry was posted in Public health, Railroads and tagged Cathedral of the Immaculate Conception, Hospitals. Bookmark the permalink.