This article first appeared in the November 2021 edition of Historico, the newsletter of the Sangamon County Historical Society. You can become a Historico subscriber: see below. 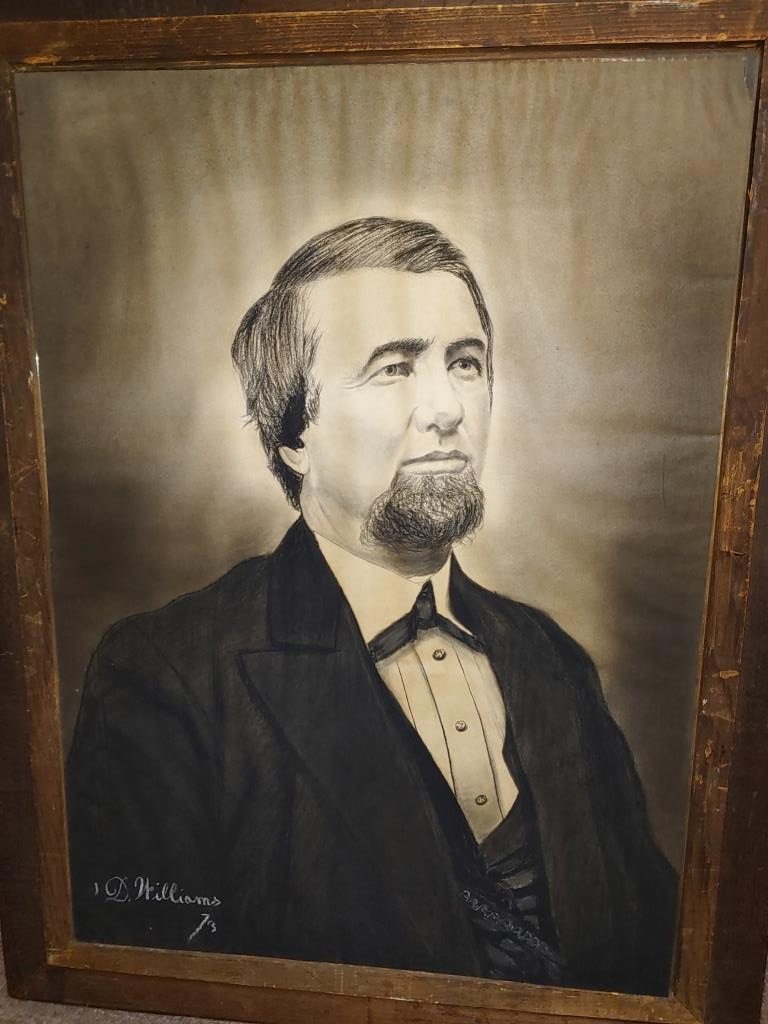 Dennis Williams was a rarity in 1880s Springfield: a successful African American artist and businessman. Only a few examples of his art are known to exist today.

Now there’s one more, thanks to SangamonLink, a local researcher, and a North Carolina thrift shop devotee.

Williams (1851-89), born an enslaved person in Mississippi, was a completely self-taught artist, partly because many teachers refused to accept an African American as a student.

Williams eventually set up a studio on the Springfield square, advertising himself as “the old reliable crayon artist.” He received awards at the county and state fairs and won commissions to do portraits of many prominent residents of Springfield and Illinois, among them U.S. Sen. John Logan and Abraham Lincoln’s adviser and friend David Davis.

SangamonLink.org, the Sangamon County Historical Society’s online encyclopedia, published a short entry about Williams in 2013. In 2021, however, Mary Frances, a college instructor, artist, and independent historian in Springfield, contacted SangamonLink and offered to write a more complete biography of Williams.

One of Frances’ interests is documenting the untold stories of African Americans – coincidentally, she received an SCHS grant this year to help pay for a grave marker for Olive Price, the sister of Eva Carroll Monroe, who founded Springfield’s Lincoln Colored Home. Frances first heard of Williams from a 1987 book, The Black Struggle for Public Schooling in Nineteenth-Century Illinois by Robert L. McCaul. “McCaul used Williams’ biography in the History of Sangamon County, Illinois (1881) to illustrate how blacks moved around in search of public schools that would admit their children,” Frances says.

After a 2002 State Journal-Register article reported that Williams mysteriously disappeared from Springfield in the late 1880s or early ‘90s, Frances says, “I made a commitment to find out what happened.”

Her research culminated in a greatly expanded SangamonLink entry about Williams, which was published this past June. (Frances found that Williams had died, under somewhat puzzling circumstances, while traveling through Texas in December 1889. He is buried near his wife’s hometown of Cairo, Ill.) The entry also included four authenticated examples of Williams’ art – a color drawing of kittens, which Williams used on his business cards, and black-and-white portraits of three men, including David Davis.

Despite his output – 100 of his portraits are documented in newspapers – the three portraits published on SangamonLink were the only signed, dated works by Williams known to exist.

That changed this September, when Andrew Cook of Durham, N.C., read SangamonLink’s entry on Williams. “I think I have a large portrait … of judge Andrew G. Henry, done by Dennis Williams,” Cook wrote as a comment to the entry. “I’d like to get more information about Mr. Williams and the judge as well. … This piece may be of historical importance.”

Initial indications were positive. Andrew G. Henry (1824-1906) was a judge and legislator from Greenville, Ill., a Republican and a supporter of Abraham Lincoln. The man depicted in the pencil drawing looks very much like the one shown on Henry’s Findagrave page. And Henry was elected to the Illinois House in both 1872 and 1874, meaning he would have been in Springfield for legislative meetings in 1873, the date on the portrait.

As SangamonLink editor, I asked Frances, the expert on Williams, to look into the portrait’s authenticity. Cook and Frances exchanged emails, which included several images of both the front and back of the framed portrait. Frances initially was cautious, because the portrait’s signature and date (“D. Williams ’73”) were atypically prominent.

The frame, however, confirmed Springfield’s Dennis Williams as the artist. Stenciling on the back says, “From C.C. Howorth’s Picture & Frame Store. No. 14, American House Block.” Frances found newspaper documentation that Howorth, a respected framer, was at that address at the time and that Williams employed Howorth to frame some of his other portraits.

Cook, who describes himself as “an art enthusiast and a history enthusiast,” bought the portrait four years ago at a thrift store in Durham, N.C. He paid less than $20 for it.

“I can’t afford all the artwork I’d love to buy, so I haunt thrift stores,” Cook says.

Part of the portrait’s attraction was its vintage frame, but the main reason, Cook says, “was the history of what it clearly was. I couldn’t stand to see something that special sit at a thrift store.”

Cook tried to learn more about the portrait when he first bought it but came up empty. Prompted by a friend’s inquiry, he tried again in September. “I got lucky putting in ‘Illinois artist D. Williams’ and found that (SangamonLink) article about Dennis Williams,” he says. “I was thrilled.”

Cook isn’t sure yet what he’ll do with the portrait, although he hopes to find a museum where it can be displayed and appreciated.

Finding the portrait and learning about its history and that of Dennis Williams “is what people who do what I do dream of,” Cook says. “But I never thought it would happen.”

“Dennis Williams fascinated and intrigued people while he was alive and even now after his death,” Frances says. “African American history is sometimes difficult to know and document, yet the effort is worth it.

“I hope we will continue to tell these unknown and forgotten stories and share them with the world.”

The Sangamon County Historical Society founded SangamonLink eight years ago to help connect people with the rich history of Sangamon County. The saga of Dennis Williams and his 148-year-old artwork shows the sometimes surprising impact those connections can have.

This entry was posted in African Americans, Arts and letters, Prominent figures. Bookmark the permalink.