Shelby M. Cullom won his first election by four votes. It was the start of a 60-year political career that would take him to the edge of the presidency.

As a lawmaker, Cullom (1829-1914) “sometimes seemed to plod,” an obituary admitted. However, he apparently was a legal and political prodigy. 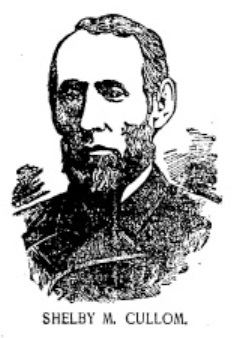 Cullom as pictured in the Illinois State Register in 1896, when he was a candidate for president (courtesy State Journal-Register)

Cullom was only 25 years old, a lawyer for at most a few months, when he was elected Springfield city attorney in April 1855. The vote was 412-408, but the circumstances today are slightly mysterious.

The only remaining records of the election appear in the columns of the Illinois State Journal and Illinois State Register. In neither, unfortunately, is the name of the other candidate fully legible. The best bet, however, is that Cullom’s near-miss opponent was another local lawyer, James B. White.

Although both newspapers reported the results of the April 3, 1855, voting, those results today are available only on sometimes badly scanned microfilm and online reproductions of that microfilm. The original newspapers gave simply the last names of the candidates, and pretty much all that can be discerned about Cullom’s opponent via the imperfect newspaper reproductions is that his name seems to have been “White”. In the 1855 Springfield city directory, James B. White is the only lawyer among people with names beginning with that letter.

What’s more, White was a Democrat – Cullom was a Whig at the time, later a Republican – and politically ambitious: James B. White was elected circuit attorney (today’s state’s attorney) in 1856 and re-elected in 1860.

But there’s another puzzling aspect of the 1855 race for city attorney. In those days, candidates announced their intentions to run with brief announcements in the newspapers. The March 29, 1855, Illinois State Register, for instance, included 18 one- and two-sentence reports of candidacies, such as the one below:

(The Register took nothing for granted. At the top of the March 29 collection of candidacy announcements was this warning: “The cash [$1] must accompany all announcement of candidates’ name, to insure insertion.)

In the weeks preceding the 1855 city election, a total of five men published announcements that they were running for city attorney. That group included Cullom, but no one named White or anyone else with a similar last name. Yet the newspaper tallies show votes were recorded only for Cullom and (presumably) James B. White.

That suggests the other four announced candidates – William Conkling, Thomas Taylor, Norman  Broadwell and Gideon Rucker – all bowed out at the last minute. The reasons are unexplained, but it’s certainly possible they involved behind-the-scenes political machinations. Was there a concerted effort to clear the way for a head-to-head contest between Cullom and his unannounced opponent? Did any of the candidates who apparently dropped out endorse one of the two who remained? (Although the city election was non-partisan, that could have worked either way: of those whose political leanings are known, Conkling was a Whig and Broadwell – though later a law partner of Cullom – a Democrat.) 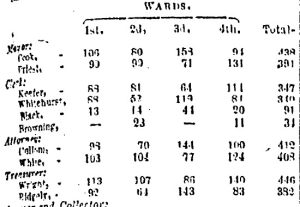 Whoever Cullom’s opponent was, he had support throughout Springfield, winning majorities in three of the four wards. Cullom won only because of Ward 3, the city’s southwest quadrant, where he received 144 votes to the other man’s 77.

Other than the vote totals, the Register’s post-election story was succinct: “The city election, although warmly contested, passed off very quietly, yesterday. We have no time for remarks this morning.” But Cullom’s political career was off to a successful start.

Shelby Moore Cullom, born in Kentucky, grew up on a farm in Tazewell County, Illinois. He moved to Springfield in 1853 to study law. According to his autobiography, Fifty Years in Public Service: Personal Recollections of Shelby M. Cullom (1911):

I consulted with Abraham Lincoln, and on his advice I entered the law offices of (John Todd) Stuart and (Benjamin S.) Edwards, both of whom were Whigs and friends of my father. They were both very good men and distinguished lawyers.

Cullom won election to the U.S. Senate in 1882, during his second gubernatorial term. He resigned as governor in February 1883 and took office in the Senate a month later. Cullom would be re-elected four times. He declined to run again in 1912 and stepped down on March 3, 1913.  In 2021, his 30 years in the Senate remained a record for Illinois.* 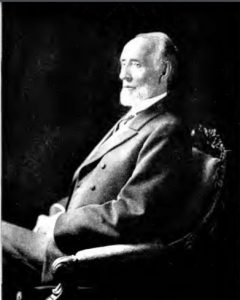 As a senator, Cullom is best known for leading the effort to create the Interstate Commerce Commission, aimed at forcing railroads to treat their customers equitably. He also served on the commission to establish laws for the new territory of Hawaii, and legislation he sponsored forced the Church of Latter-Day Saints (Mormons) to disavow polygamy.

Cullom spent most of his Senate years in Washington, D.C., but he kept a suite of rooms at the Leland Hotel, and Springfield remained his official home.

In 1896, Cullom supporters tried to have Illinois’ Republican Party endorse Cullom as a favorite-son candidate for the presidency, which would have put his name into nomination at the Republican National Convention. However, delegates to the state GOP convention, which met in April in the Dome Building at the Illinois State Fairgrounds, voted 832-503 to support the eventual president, William McKinley of Ohio.

After leaving the Senate, Cullom was named to the commission to build the Lincoln Memorial in Washington, D.C. (Cullom was known for his resemblance to Lincoln). His last words reportedly were regrets that he wouldn’t live to see the memorial finished. It was dedicated in 1922.

*U.S. Sen. Dick Durbin, who coincidentally also is from Springfield, was elected to that office for the fifth time, matching Cullom’s election record, in 2020. If Durbin serves out his current term, which is scheduled to expire in 2027, he’ll also match Cullom’s years in the Senate.