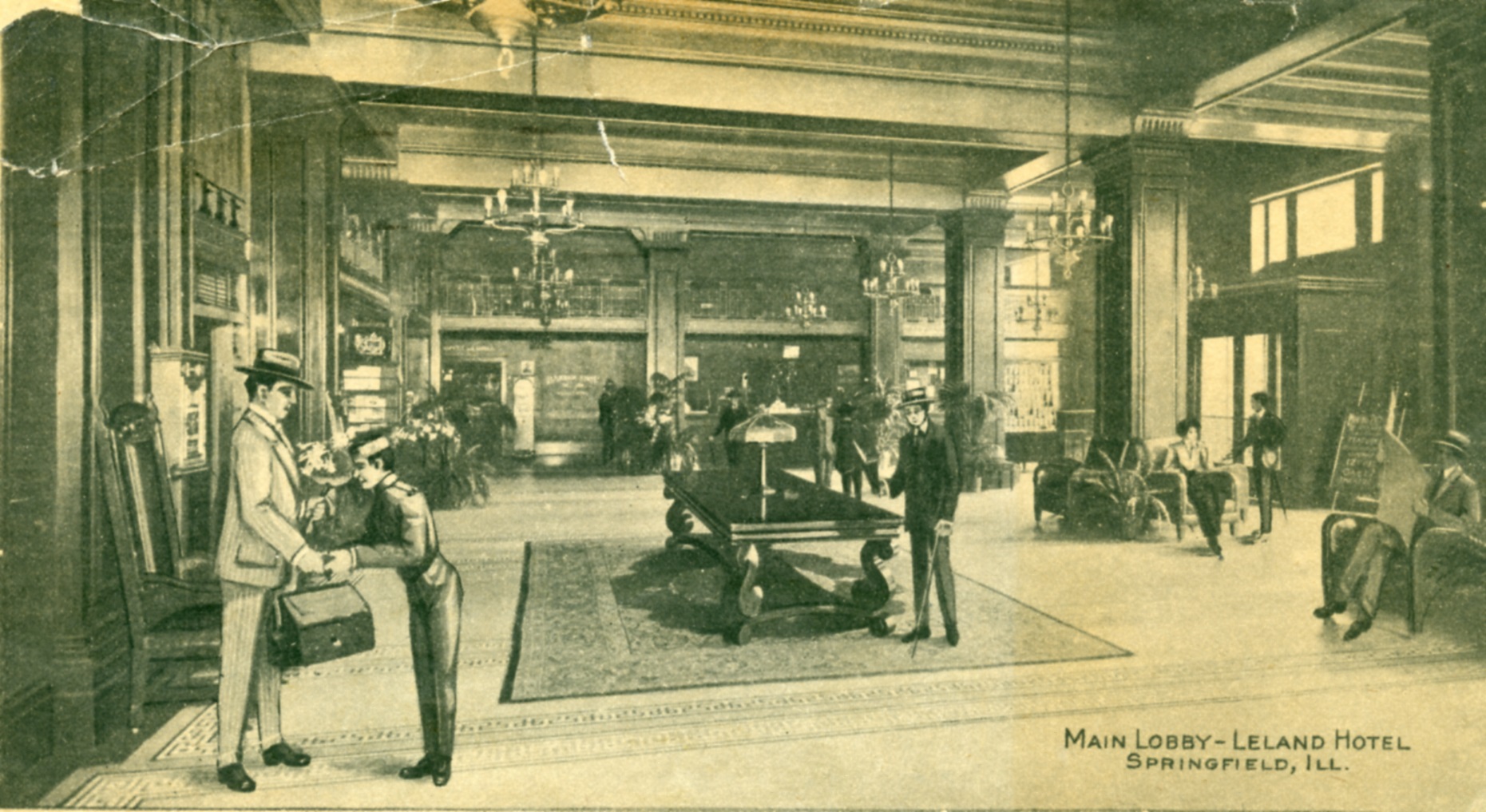 The Leland Hotel, on the northwest corner of Sixth Street and Capitol Avenue, played host to travelers, party-goers, celebrities and politicians for 103 years in Springfield.

The hotel probably got its most extensive public notice when it served as national headquarters for Gov. Adlai Stevenson’s campaign for the presidency in 1952. Illinois State Journal columnist Pauline Telford described the scene in 1972.

Top newsmen from all over the world, representing all media, were quartered there, using it as their base for broadcasts and coverage of events as they took shape during the campaign.

It was there in the ballroom that a victory party was planned for a victory that didn’t take place. Tables of food and drink went untouched as only a small staunch group of supporters, many of them with tears in their eyes, wandered around the near-empty ballroom in a daze, unable to believe their eyes and ears as the overwhelming returns for Gen. Ike Eisenhower cascaded in and were placed on the enormous blackboard which had been erected at one end of the room.

Stevenson conceded the election from the Leland ballroom the evening of Nov. 4.

“Someone asked me…how I felt,” Stevenson said, “and I was reminded of a story that a fellow townsman of ours used to tell – Abraham Lincoln. He said he felt like the little boy who had stubbed his toe in the dark. He said that he was too old to cry, but it hurt too much to laugh.”

The Leland was the temporary home of many other notables during its century of operations: performers Edwin Booth, Joseph Jefferson and Billie Burke, P.T. Barnum, Buffalo Bill Cody, writer Ida Tarbell, presidents U.S. Grant, Benjamin Harrison and Rutherford B. Hays, generals William T. Sherman and George Custer, and Abraham Lincoln’s son Robert. Despite Stevenson’s adoption of the hotel as his headquarters, the Leland historically was the local meeting place for Republican politicians. 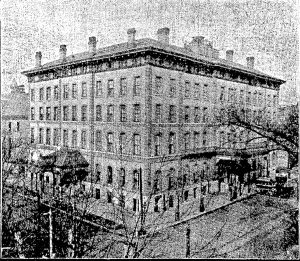 The Leland opened in January 1867 with a ball the Illinois State Journal called “the social sensation of the season.” An estimated 1,000 people, including Gov. Richard Oglesby, Sen. Richard Yates and members of the legislature, crowded into the new hotel for dining (a cold buffet featuring “oysters, salads, cold meats, jellies, wines, coffee, tea, and every appurtenance of epicurean feast”) and dancing.

“No more faultless ball ever was given in the West, and every one who was present will remember the opening ball at the Leland with pride and pleasure,” the newspaper reported.

The five-story, 193-room original Leland was built by a group of local stockholders, which leased its operations to Simeon Leland & Co. of New York. The local managers were two brothers-in-law, Horace Leland (1836-89), Simeon’s nephew, and Col. Noble Bates Wiggins (1841-1901). Leland and Wiggins bought out the stock company in 1880, and Wiggins became sole owner after Leland died in 1889. A 35-room annex was added in 1898. 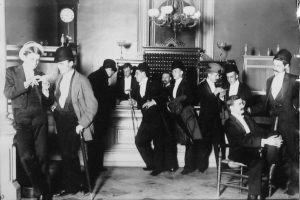 “In social affairs, the Leland of old was the gathering point for many large and elaborate functions,” the Illinois State Journal reported in 1911. “Each winter saw the Springfield Assembly dances held there and many social affairs of like prominence were given there.”

Much of the food for the Leland Hotel came from the hotel’s own 600-acre farm southwest of Springfield, the area that now takes in the city of Leland Grove and the Oak Knolls subdivision (and which includes portions of streets named Noble, Bates and Wiggins).

Wiggins was a member of the Lincoln Guard of Honor, the small group of local men who safeguarded the secret locations of the body of Abraham Lincoln between 1876, when grave robbers tried to steal the body, and 1901, when Lincoln was securely interred below the floor of the Lincoln Tomb burial chamber. 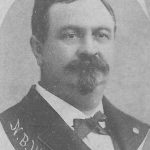 “Col. Wiggins was one of the best known and most popular hotel men in the west,” according to his Illinois State Register obituary. “He was of a generous and genial nature, and he numbered his friends by the thousand.” 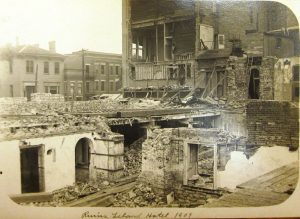 Lewis Wiggins controlled the hotel on March 26, 1908, when a spectacular fire destroyed the top two floors of the main building and heavily damaged the rest. Firefighters were hampered by breaking hoses and inadequate pumpers, according to Illinois State Journal coverage, and were both aided and impeded by crowds of onlookers. (The Journal, across an alley just north of the hotel, was itself in jeopardy from the fire.)

In the open court and the alleys north and west of the burning building, the people were packed in spite of the warnings of the police that they were in deadly danger from falling cornices and electric fires. Men with store clothes on hitched themselves to the hose and worked like turks. Alderman Kim Haynes and D.C. Kearns were as busy as any of the firemen and every now and then Dick Sullivan, the well known political leader, could be heard giving directions in a stentorian voice to the workers. Dr. Frank Fleury, as a worthy representative of the Red Cross, distributed sandwiches and hot coffee from the hotel kitchen.

The scene from this point of view was a most impressive one. … Flames could be seen here and there licking their way out under the edge of the heavy cornices and glaring through the windows in the upper stories. The water that was sent up from the hose either fell short or failed to strike the flames. Attempts were made to carry hose up through the windows, but this was abandoned and they were played from the roof of the Journal building.

A new owner formed by the Springfield Chamber of Commerce, the Springfield Hotel Co., raised funds to rebuild the hotel, and an eight-story Leland opened on Aug. 12, 1911, under management of Edward O. Perry. The Journal covered the event.

Every room in the hotel was in shape and ready for occupancy when the callers began to reach the hotel.

Manager Perry was annoyed by the usual class of callers who ply their calling of picking up souvenirs wherever they go. Small articles, such as match cases and other movable fixtures of lesser importance, were missed early in the day, and access to most of the rooms above the second floor therefore was denied. Little of value was taken.

The Perry family later bought the hotel and continued to operate it until 1947, when the Perrys sold the Leland to a Springfield-based corporation headed by John B. Nevin. 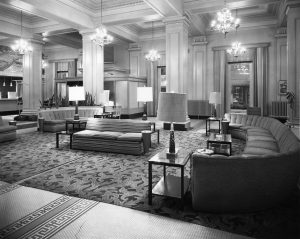 James Bollinger became the hotel’s manager, a job he held until 1969, when Nevin sold the hotel – which by then had 140 rooms and had been renamed the Leland Motor Hotel – to American States Investors Corp. However, the Leland suffered from an out-of-date structure and a hemmed-in location, and its days already were numbered.

The Leland served as one of the headquarters for Illinois’ 1970 Constitutional Convention in the summer of 1970, but a few weeks later, Illinois State Journal columnist Toby McDaniel was reporting that celebrities in town for the 1970 Illinois State Fair had abandoned the Leland.

All the stars had been booked into the downtown hotel by the coordinating talent agency months ago (they’ve been out at the Holiday Inn East in previous years). Fair host Skitch Henderson moved into the Leland last week, so did Art Linkletter and others appearing on the grandstand stage. But Linkletter reportedly complained he had an antiquated room and left town unhappy. Henderson apparently is staying on. Early this week performers in one of the grandstand acts were told they couldn’t take their show dog into the hotel. They left, went to Holiday Inn and are mad because the Leland is demanding payment for the reservations they cancelled. It’s reported Johnny Cash (due in tomorrow) complained about the Leland’s rates. So, the agency stepped in Tuesday and cancelled reservations for the stars who were yet to come, booked them into the Holiday Inn.

Managers struggled in vain to keep the hotel open. A fundraising barbecue and dance fell flat on Oct. 2, 1970 – fewer than 100 people attended – and the final straws took place a week later, when Illinois Bell yanked out the Leland’s telephones and the Central Illinois Light Co. turned off the gas. Some diners in the Red Lion bar and restaurant were still waiting for service when they were told they had to leave. The bar’s piano player, Johnnie “Rangle-Tangle” Honner, played a funeral dirge.

The hotel’s 25 remaining tenants included Nellie Baugh, who had lived at the Leland for 26 years. She moved to the Lincoln Towers.

The Leland building’s lower floors were converted to classrooms and offices for the former Sangamon State University from 1972 into the early 1980s, while the Illinois Commerce Commission used the upper stories. As of 2016, the ICC occupied the entire structure.

Telford’s 1972 column was essentially an obituary for the Leland. It was a landmark, she said, not because of the VIPs who visited, the thousands of people who patronized the hotel, or the glamorous events it hosted, “but because of the dignified part it has played in Springfield history.”

The Leland, she wrote, was “part of a time and place that will never be repeated.”