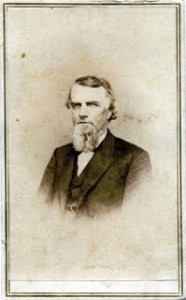 Benjamin received his education at Yale University and became the first citizen born in Illinois to graduate from that institution. While in New Haven he met Helen Dodge, the younger sister of his classmate Richard Dodge. Benjamin and Helen were married in August of 1839. After a honeymoon in Buffalo, N.Y., they decided to settle in Springfield, where Benjamin’s brother Ninian was an established politician.

Helen and Benjamin arrived in Springfield in January of 1840 and stayed with Ninian and his wife Elizabeth for a few weeks. This is where Helen met and befriended Mary Todd, who was staying with her sister Elizabeth. Helen and Mary would remain friends their entire lives. Benjamin and Helen spent three years at a house at Fourth and Adams streets, where their daughter Helen was born. In June of 1843 they moved into the house now known as Edwards Place. Two more daughters followed: Alice in 1844, and Mollie in 1848.

Benjamin was an attorney by profession. After arriving in Springfield he studied with Stephen T. Logan and briefly partnered with Edward D. Baker before going into partnership with John T. Stuart in 1843. That partnership remained intact until Stuart’s death in 1885.

Benjamin met Abraham Lincoln more than 400 times in the courtroom, sometimes serving as co-counsel and sometimes as opposing counsel. Politically, Benjamin was a Whig until that party’s dissolution in the mid-1850s. He briefly cast his lot with the Republicans, but ultimately found the abolitionist wing too radical for his comfort. By 1858, he had cast his allegiance with the Democratic party. That year he invited Stephen Douglas, a candidate for U.S. Senate as well as a personal friend, to hold a rally on the grounds of Edwards Place.

In 1868 Benjamin was elected judge of the Eighth Judicial Circuit, a post he held for a year and a half before resuming his law practice. At the time of his death in 1886 he was president of the Illinois State Bar Association.

Copyright The People Lincoln Knew, a blog by Erika Holst. Reprinted by permission.