On the day in 1912 when 16-year-old Mary Ann Yezdauskas arrived in Springfield from Lithuania, her brother took her to the elegant Bressmer’s Department Store to buy a new coat. Then the sister and brother posed together in their finery at the Herbert Georg Photo Studio. The purpose? To let anxious parents back home know their young daughter had safely weathered her voyage to join an older brother already established in the United States. 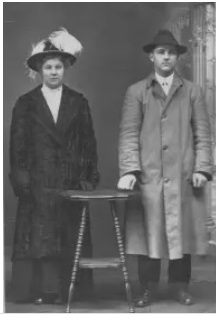 A copy of the photo sent home to Mary Ann’s parents Antanina and Vincas Yezdauskas (Yezdauski) survives today, along with the refurbished steamer trunk that carried Mary Ann’s possessions across the Atlantic. Thus begins the story of an immigrant wife and mother from an era of formidable housework and few labor-saving devices: a story of strenuous toil and lost children that undoubtedly was shared by many immigrant women.

After arriving in Springfield, Mary Ann first lived with her unmarried older brother, Antanas (Anthony) Yezdauskas, who had paid her passage to America and welcomed her to Springfield. According to daughter Helen (Sitki) Rackauskas, Mary Ann first worked at Springfield’s International Shoe Company, then at her aunt Emma Gedman’s Saloon at 808 E. Washington St.

While a barmaid, Mary Ann met coal miners who came to the saloon to cash their paychecks. One of them was Lithuanian-American Anthony J. Sitki, whom she married in 1918 at St. Vincent de Paul Church. Anthony was born in 1896 in the coal-mining town of Scranton, Pa., to Lithuanian immigrants Annie (Valentine) and her coal-miner husband Adolph Stozygowski (Sitki).

It wouldn’t be fair to say that Mary Ann’s hardships began with marriage and childbearing, since already as a young person and perhaps even a child, she had known a life of hard work. However, according to her daughter Helen, Mary Ann’s greatest sufferings were as a mother who lost five of her seven offspring as either infants or children. Compounding these losses, each new burial loaded new debt onto the struggling family, requiring decades of weekly funeral home payments nearly as crushing – and enduring – as a mother’s grief.

It often was a struggle to pay those debts, especially when Anthony Sitki was out of work. No matter how young and tiny the deceased child or infant, certain corners could not be cut. This made serial infant mortality not just an emotional tragedy, but a financial one as well for many immigrant families.

After Mass every Sunday, Helen went with her mother to visit her siblings’ graves. “It was a sad childhood,” she says, especially remembering how her sister Josephine died at age 12, screaming in the agony of peritonitis in a hospital that could not help her after her appendix burst. 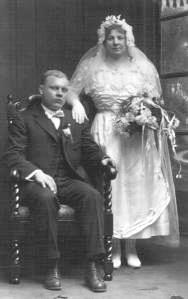 Perhaps it was the souls of her lost little ones that Mary Ann was thinking of when she began to raise songbirds and exotic flowers. By the time Helen and her surviving brother, Raymond, grew up and left home, their mother had so many canaries, African violets, and other exotic indoor flowers that husband Anthony enclosed the back porch of the family home at 1820 S. 16th St. to create a special room for the living things his wife tended with so much love and care.

For a time, Helen recalls, her mother even experimented with capturing native songbirds like cardinals in a special cage, freeing them when she couldn’t get them to sing or mate in captivity. Mary Ann also had the most talented green thumb in the neighborhood.

“She just really loved and was really good at raising living things.  She was able to grow flowers nobody else could,” Helen recalls. She also could grow the most challenging plants from mere cuttings.  Mary Ann attracted the attention of an African-American greenhouse operator at 16th Street and South Grand Avenue, who asked her to work for him. She declined, but the man inherited her prized hibiscus after she died.

Helen remembers home food production—especially her mother’s backyard farm, with rows of vegetables, cherry trees, chickens and geese. Amid the constant work of collecting eggs and baking bread and pies, Mary Ann canned hundreds of quarts of green beans and mushrooms. She made blood sausage and various “head cheese”-like dishes, such as jellied pigs’ feet or pigs’ feet in aspic (košeliena). She prepared the grated potato casserole kugelis, cold and hot beet soup, and many other Lithuanian dishes, including potato pancakes for meatless Fridays.

Sunday chicken dinners were a feature of Lithuanian immigrant life all over Springfield, but “bird lady” Mary Ann would not slaughter her own chickens. A Russian neighbor was called in for this task.

Easter featured blood soup made from fresh blood drained from the neck of a slaughtered goose, mixed with vinegar to keep it from coagulating. The blood later was cooked with prunes and plums.

Nothing from their animals was wasted. During winter nights with no television, Helen says she, her mother and Raymond would huddle in the basement and pull the down off goose feathers to make pillows. 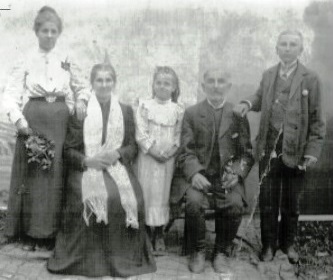 Mary Ann Yezdauskas, left, with her mother Antanina, father Vincas, and little sister and brother before departing Lithuania. Circa 1912.

“Mom kept a barrel in the backyard where the feathers were washed and then dried on a grate in the sun during the summer,” Helen recalls. “In the winter, when it got cold, several nights a week we would go into the basement and sit next to the furnace, plucking the feathers. It would take two whole winters of all of us working to make maybe one pillow.”

Besides that, the labor-intensive job that Helen liked least was pitting cherries for homemade pies. And before the days of professional carpet cleaners, Mary Ann would wet and crumple torn newspapers into balls, throw them on the rugs, and sweep them across the rugs to collect dust and dirt.  Rugs were also taken into the basement to be beaten.

After graduating from Feitshans High School and Brown’s Business College, Helen went to work at the Illinois Department of Finance and then married another Lithuanian-American, George Rackauskas.

On her wedding day in 1948, her parents met the newlyweds at the door to their home on South 16th for the reception, holding a tray. On the tray was a dish of salt, several pieces of rye bread, and spicy, warm vyritos (a Lithuanian liqueur made with whiskey, honey and spices) in a shot glass.

“George and I dipped a piece of bread in salt and ate it, then drank a shot of vyritos,” Helen says. The bread symbolized good times, the salt, bad times, and the vyritos, marital happiness.

The Rev. Casimir Andruskevitch, who had grown up in the parish, married Helen and George at St. Vincent de Paul’s, where Anthony and Mary Ann had been married 30 years earlier. Two cooks were hired to serve chicken, ham, kielbasa, barrels of beer, and other drinks and foods in the basement of the home on South 16th.

John Mezeilis played the accordion, and the reception lasted for two days, according to Helen. Helen and her groom, however, departed the first night in his 1939 Pontiac. (Helen reports that they would have gone farther than St. Louis if their car hadn’t broken down.)

Poverty and ‘Mine Wars’

Helen recalls that Anthony Sitki had mine work only from September to February. The miners were laid off each spring after the operators and their customers stockpiled enough coal to last until the following autumn. It was a cruel system for miners and their families.

As a child, Helen remembers her parents receiving letters from the county with stickers that entitled the children to a form of public aid: free shoes and winter coats from the upscale Myers Brothers Department Store.

“We were old enough to be embarrassed, but happy to be getting such nice things,” Helen recalls. “Myers was a really expensive store.” 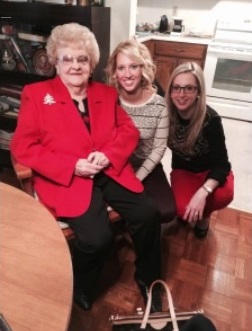 To help her mother learn English, Anthony Sitki bought Mary Ann a radio soon after they were married, and he insisted she respond in English even when the children spoke to her in Lithuanian. Originally illiterate, Mary Ann taught herself to read and write from library books by the time Helen and Raymond were in high school. She remained a lifelong patron of the old Lincoln Library branch on South Grand Avenue.

During the 1932-36 “Mine Wars” between rival miner unions, Anthony Sitki stayed with the United Mine Workers of America. That put him at some risk from striking Progressive Miners of America. One morning as Sitki prepared to drive to work, a friend called to warn that some Progressives were waiting at the corner of 16th and Cornell to club his car.

Sitki took another route. But that night, Helen recalls, somebody threw bricks through the window where her baby brother Raymond was sleeping in his crib.

Anthony Sitki died at age 55 in 1951 from a heart attack somewhat related to mining. Another miner had been arguing with him while driving back from their jobs with the Peabody Coal Co. in Taylorville. After the other miner got physical, Sitki got out of the car and collapsed and died at his own front door. He had an underlying heart condition that had secured him a reprieve from working underground, so he had been working “up top” his last day at the mine.

Mary Ann Sitki, who in her 50s still wore her hair in long braids, never got over her husband’s death. She suffered a heart attack and died at age 56 in 1952, only a year after her beloved Anthony.