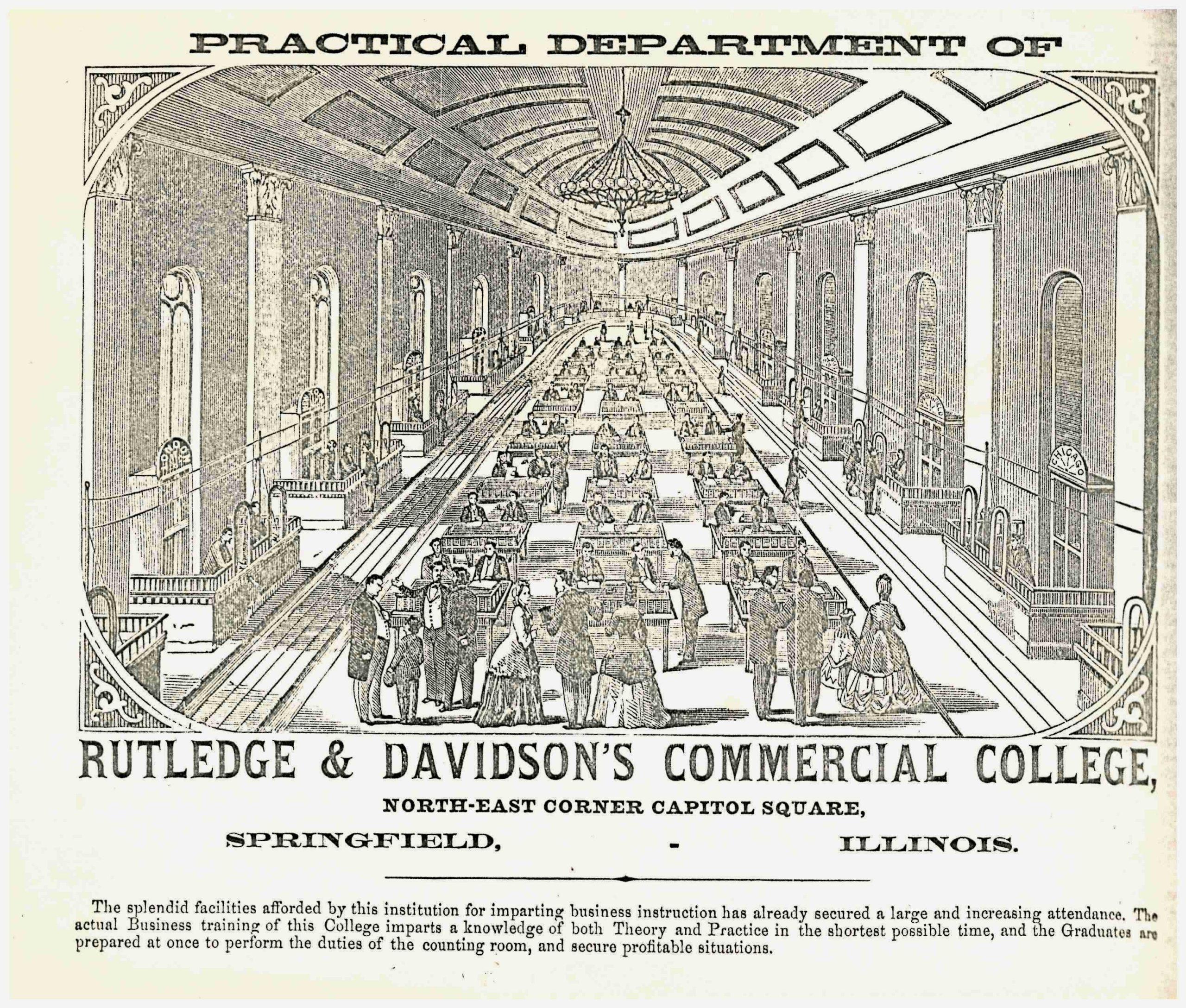 Rutledge & Davidson’s Commercial College had expansive quarters on the northeast  corner of the downtown square. When classes weren’t in session, the building  also served as a meeting hall and lecture space. (Sangamon Valley Collection)

In 1864, Washington Rutledge, a relative of Abraham Lincoln’s reputed love Ann Rutledge, opened Rutledge & Davidson’s Commercial College in Springfield. Over the next 130 years, Rutledge & Davidson’s and its descendants provided what an early advertisement called “passports to lucrative and responsible positions” to an estimated 50,000 young men and women.

Recognizing an opportunity, Bogardus added to the name, and for a few years the school was called the Springfield Business College and Telegraph Institute. To teach telegraphy, Bogardus hired a six-year veteran of the Toledo, Wabash and Western Railroad dispatch department. College ads said pupils would study a “(f)ull course in theoretical and practical telegraphy by sound, telegraph book-keeping, management of batteries, switch boards, etc., and all kinds of railroad business.” The cost was $30, with a discount for groups. 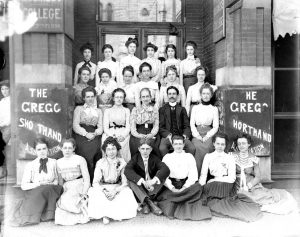 Students and at least some faculty members in 1900-01. The Springfield Business College was then housed in the YMCA building at Fifth Street and Capitol Avenue. (SVC)

Bogardus adopted innovative instruction methods throughout the rest of the school too. An Illinois State Journal writer visited the school in 1881 and reported that “the textbook has been practically discarded, and seven-eighths of the work in the school is actual experience.”

After a few weeks of basic instruction in bookkeeping and business methods, each student was given $1,000 in “college currency” and directed to set up him- or herself (most of the students were male, but some were unmarried women) in sample businesses. The college was its own mini-economy, with a student-operated bank, wholesale house, freight depots, real estate office, and stationery dealer, among others. Students rotated from business to business, “striving just as hard to drive a bargain as our own merchants do,” the newspaper reported.

“(W)hen the course is finished, (students) are competent to enter any business office and take charge of the books,” the story concluded.

In 1885, Bogardus took on a partner, a former teacher at the Jacksonville Business College with the unfortunate name of Henry Bailey Chicken. Chicken (1852-1914) bought out Bogardus in 1893 and remained in charge until his death. 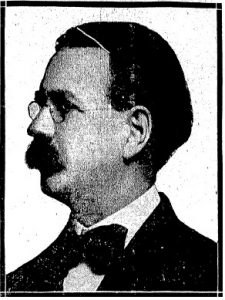 He also went to court in 1899 to legally change his last name. Chicken told the Illinois State Register his family had split into two groups after immigrating from Germany. His part of the family had anglicized their name to Chicken. The other half kept the German version, Henkel. Over the years, the Chickens had dwindled so that he no longer had any relatives with that name, Chicken said, while the Henkels were numerous. He was known as H.B. Henkel the last 15 years of his life.

The college, which had been housed at several locations around Springfield, moved into the third floor of the Illinois State Register building, 611 E. Monroe St., when it was built in 1904. It would stay there for 64 years.

The school specialized in courses in bookkeeping, accounting, typing, stenography and shorthand and similar skills, although “Nancy Taylor Charm” classes were a later addition to the curriculum. Brown’s offered day-time and evening classes to both full-time and part-time students. Although it had no dormitories, Brown’s did seek room-and-board homes for “young ladies” who moved to Springfield for their studies.

Graduates got also free job placement services. An ad in 1934, during the Great Depression, boasted that 90 students had been placed with Springfield firms over the past year.

Brown’s merged with a competitor, the Institute of Business Techniques, in 1963 to form the Illinois Business College. In announcing the merger, the schools said they planned to expand the curriculum and would provide post-high school training in accounting, business administration, stenography, office machines, stenography and secretarial skills. IBC also would offer correspondence courses, the announcement said.

IBC began in the same offices on Monroe Street that “the Old Henkel School” occupied in 1904. However, with baby boomers reaching college age, the school’s owners thought they saw opportunity in a massive expansion. In 1968, IBC built new classrooms, offices and a 75-student women’s dorm on a 7½-acre campus on Churchill Road. The move turned out to be a mistake, and Illinois Business College folded only a year later, in the midst of lawsuits, IRS liens and unpaid debts. 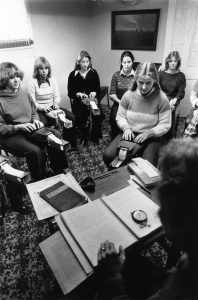 However, the retirement of the school’s last owner, Florence Wellon, prompted its final closure in June 1994. At the time, Brown’s had about 40 students and four teachers. It offered secretarial and word processing training tailored for the legal, medical and administrative fields. Tuition ranged from $3,800 to $5,700 for six- or nine-month courses.

Brown’s last director, Mark Woodworth, said the college would stay open for a month after the end of the final term to help as many students as possible find jobs.

“We wanted to have a graceful end to things after 130 years,” he said.

This entry was posted in Business, Education, Higher education, Schools and school districts. Bookmark the permalink.