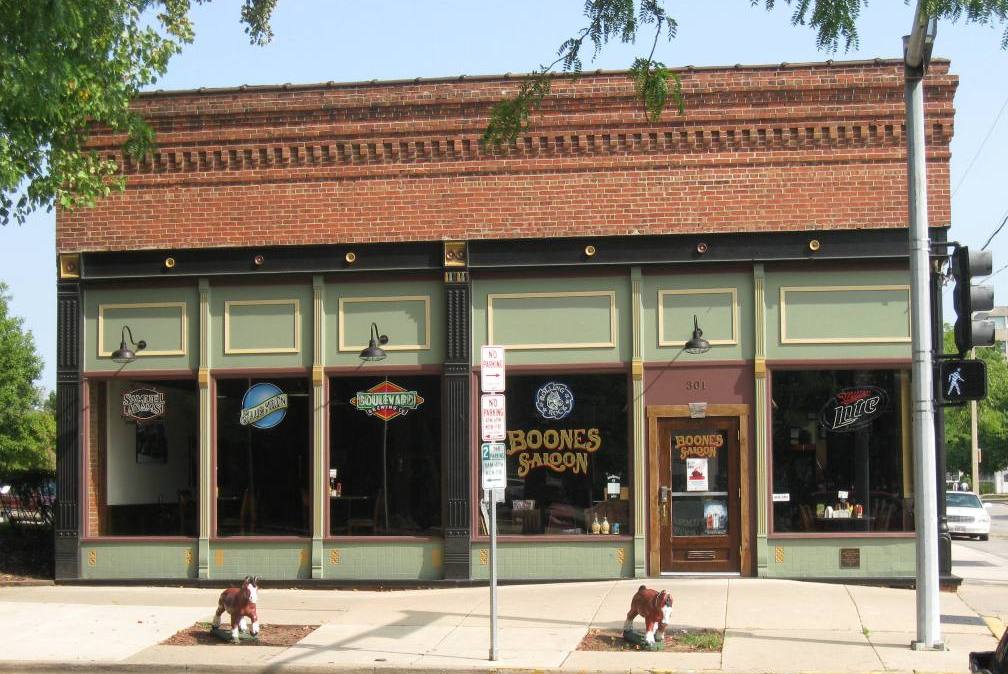 “The name Gottschalk has been synonymous in Springfield with quality foods,” the Illinois State Register proclaimed in 1924, when Gottschalk’s grocery celebrated 35 years in business at College Avenue and Edwards Street.

At the time, in addition to basic staples, Gottschalk’s sold things such as spiced cantaloupe, chutney, anchovy sauce, imported cheese, real Russian caviar and “a variety of fish pastes.” In short, Gottschalk’s had the flair of a specialty food store, the type usually found in larger cities.

Before the era of the supermarket, family-owned groceries were a fixture of Springfield neighborhoods. Gottschalk’s was unusual, however, in both the variety of its selections and in that it remained in business until the early 1970s.

The Gottschalk family hailed from the Baden-Württemberg area of Germany. Frederick Gottschalk, who operated the grocery for decades, was one of five children born to immigrants Maria (Feuerbacher) and Johann Gottschalk. Johann worked as a butcher in Springfield and owned a shop at 411 E. Monroe St. In 1880, he committed suicide (by hanging) in the store’s slaughterhouse. “No cause whatever can be assigned for the rash act,” the Register reported. 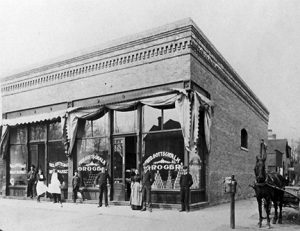 Johann’s death propelled his son Fred to become one of the breadwinners of the family. Eight years later, Maria Gottschalk bought a wood-frame grocery on the northwest corner of College and Edwards Streets – 301 W. Edwards St., to be exact – from Winfield Scott Barber (1852-1932), a wholesale grocer.

At the time, products in grocery stores were bought and sold in bulk, and sales were done by weight. Items were kept in barrels and bins on the shop floor, and clerks filled customers’ orders because the self-service grocery did not yet exist. 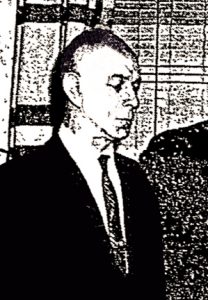 By the mid-1890s, Gottschalk’s grocery was doing a robust business. The neighborhood was growing, and the store was near both the Illinois Statehouse and the downtown business district. Over the decades, the store counted many prominent Springfield residents among its customers, families like the Bunns, Pattons, and Vredenburghs along with several Illinois governors.

The Gottschalk family had the old wood frame grocery demolished around 1896 and in its place was built a brick and cast-iron structure complete with a double-front entry. The western entry of the new grocery led to a butcher shop. The east entry opened to the retail portion of the store. The brickwork was simple, unpainted masonry, and the ironwork was manufactured locally by the Aetna Foundry and Machine Works.

Fred’s younger sister Minna “Minnie” Gottschalk served as the store’s bookkeeper until around 1913, while other members of the family worked as store clerks at various periods. Living up to the store’s reputation as more than a standard neighborhood grocery, Fred Gottschalk teamed with Alfred Booth to sell “Sealshipt” oysters. The brand was touted for its “cleanliness;” Sealshipt packed its oysters in steel and porcelain containers, as opposed to the barrel-shipped oysters that were more common for the era.

Gottschalk added an additional story onto the grocery in 1909. The store was repainted in early 1910, a period that must have been a profitable one, because the Register announced that July that Fred Gottschalk had just bought a new automobile. 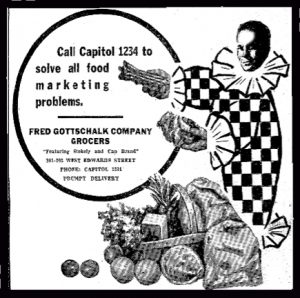 Fred Gottschalk died in August 1927 of heart failure while taking a lunch break from his duties at the grocery. His son Arthur carried on the business until August 1971, when he died at age 72.

Arthur Gottschalk was a prominent figure in areas other than the grocery business. Among the highlights mentioned in his obituary, Arthur had served as president of the YMCA, as the local USO chairman during World War II and as treasurer of the Springfield Airport Authority during the 1950s.

The building was occupied (briefly) by the Amorous Aardvark, a clothing and children’s store.

In 1974, Dairy Rose, an 1890s-styled ice cream parlor complete with a piano player (later, a player piano) hammering out ragtime classics, moved into the space. The parlor had lunchroom seating in the former butcher shop section.

Dairy Rose later opened parlors in the Myers Brothers department store and another in White Oaks Mall, but the business ultimately was short-lived. Dairy Rose stopped selling ice cream around 1978, and by 1980, owners closed the Edwards Street location.

Hat tip: Chuck Kirchner’s application for Gottschalk’s Market to be included on the National Register of Historic Places provided some of the information for this entry.