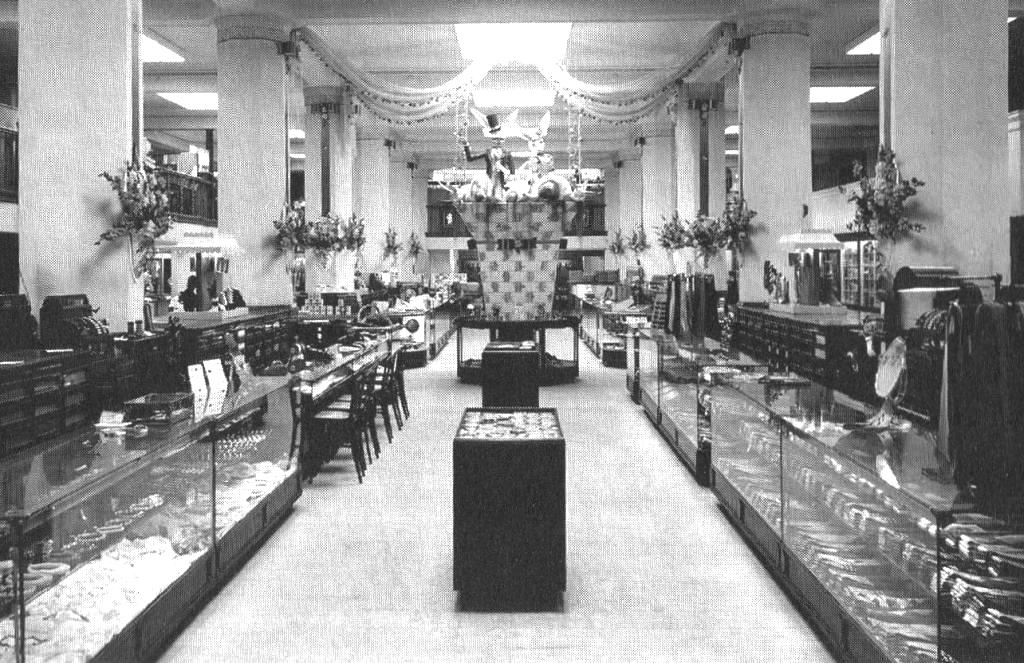 “The Store That Quality Built” began with Morris Myers, an immigrant from Germany who opened a general store in Athens in 1858. Myers moved his store to Springfield in 1865.

Morris Myers died in 1873, leaving sons Albert, Louis and Julius to continue the family’s mercantile tradition. In 1886, the brothers bought Samuel Rosenwald’s men’s and boys’ wear outlet on the north side of the square and renamed the store Myers Brothers.

By 1900, the brothers were able to finance a five-story building on the southwest corner of Fifth and Washington streets. That enterprise also proved successful, but a fire that destroyed the building in March 1924 was what cemented the Myers Brothers legend.

The fire was still burning when the Myers brothers bought the building and contents of the B.A. Lange store a block away. That store opened under the Myers Brothers name the next morning. Myers Brothers operated from the makeshift space for almost 18 months, while a bigger (10 stories instead of five) and better building replaced the old one at Fifth and Washington.

“They closed this (the Lange space) store on Saturday night, Sept. 5, 1925 and were open for business in their new building on the site of the one destroyed by fire on Tuesday, Sept. 8, the day following Labor Day,” according to a  1950 Illinois State Journal-Register profile of Myers Brothers. “… Only one day was lost in operation of business in spite of the fire disaster.”

The last of the founding Myers brothers died in 1941, and two new sets of brothers took over the business — Albert Jr. and Stanley Myers, the sons of the original Albert, and Morris and Alan, the sons of Louis.

Myers Brothers Department Store (which over the years added outlets throughout central Illinois) regularly won national merchandising and advertising awards.  The store also was the first department store to have home delivery in Springfield, the first to create a non-contributory pension plan for its employees, the first local store to have automatic elevators, and the first Springfield business to be the subject of a page-one story in the Wall Street Journal. In another ground-breaking step, Myers Brothers installed air-conditioning in all 10 floors of its flagship building in 1949.

The Myers brothers also were civic-minded.

“The firm has always been active in every civic undertaking of importance, every community drive for any worthy cause, and in every effort to promote the welfare and progress of the city,” the Journal-Register said in the same July 9, 1950 profile. “In doing so, the firm feels that they are building for a greater future upon the foundation of a successful past.” Albert Myers Jr. was named Springfield’s First Citizen in 1973.

In 1968, when Myers Brothers was bought by clothing firm Phillips-Van Heusen, the store had 70 selling departments and 275 employees. Despite the sale, the Myers family continued to run the operation, and the Myers Brothers name remained on the stores. At the time, Alan Myers (1904-90) was president, Morris (1899-1984) was chairman, Albert (1917-2005) was vice president of the Springfield store, and Stanley (1908-99) was general manager.

Phillips-Van Heusen sold Myers Brothers to the Bergner department store chain in March 1978. At the time, Bergner’s said there was no plan to change names and vowed that the downtown store would remain the Myers flagship, although Myers opened an outlet in White Oaks Mall that same year. 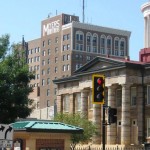 Neither of those promises were kept. The Myers Brothers stores were renamed Bergners in 1983, and the downtown store closed in 1989. The name disappeared — except that, as of 2014, it remained painted atop the former Myers building downtown.

Albert Myers Jr. summed up the family’s philosophy in an interview in the 1970s.

Men  like Albert, Louis and Julius Myers built foundations. They didn’t build it for a buck for today, making a fast buck, getting in and out; their business and the importance of business in the community and growing with the community was paramount to these men, much more important than just making a dollar for today.

Sources: Lincoln Library Sangamon Valley Collection files. Also, Five members of the Myers family, including Alan, Albert and Morris Myers, were interviewed in the early 1970s as part of the Sangamon State University (now the University of Illinois Springfield) oral history program. Their interviews are catalogued as the Myers Brothers Department Store Project. For a look at some of Myers Brothers’ marketing, see entry on Myers Brothers’ monkey.