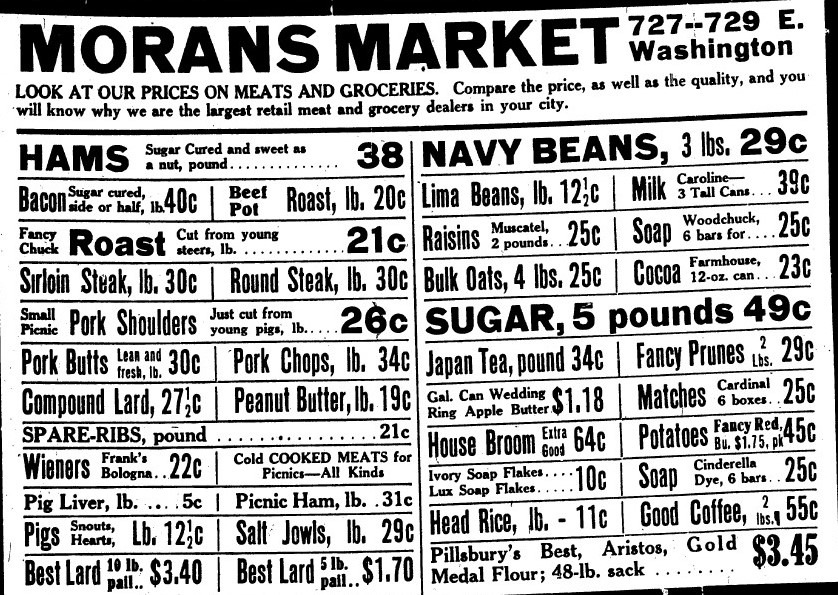 Springfield was a latecomer to the trend, according to the Illinois State Register’s story. Stores in Chicago and several other cities downstate had operated on the “help yourself plan” for some time, the newspaper said, and the system was widespread in the southern U.S.

Up to then in Springfield, however, consumers hadn’t been able collect their groceries themselves; instead, they had to ask store employees to retrieve their items from the shelves. Moran Market had to close for two days to rearrange the store’s layout ahead of the change. According to the Register article:

The customer will enter this enclosure through a turnstile near the front door. If not provided with a basket, one is to be found at hand. They then pass down the counters and along the shelves, selecting such goods as are wanted. At the point of exit, after the customer has finished selecting, is to be stationed a checker, who will remove the goods from the basket, check up the total cost and receive payment. The goods may then be carried away from the store.

Meat department operations were to be unchanged – butchers would still cut customers’ selections and hand it to them, McElroy said. But in general, he told the paper, 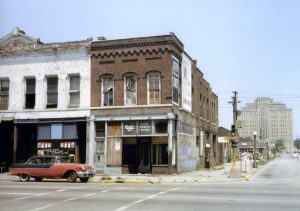 Moran Market, which was owned by Peorian William Moran, opened in 1914 and closed in 1927. Thomas Lawler Jr., the local manager when Moran’s closed, took over the site and opened his own grocery, Bargain Market.

The two buildings occupied by Moran, at 727 and 729 E. Washington St., were demolished in 1966 to clear the way for Horace Mann Insurance’s new headquarters.

The first local grocery store to bill itself as a “supermarket” was the A&P store at 618 South Grand Ave.E., which took on the label in June 1940.

What made a supermarket different from a standard self-service grocery? For one thing, the market baskets had been replaced by “lightweight steel shopping gliders,” better known later as grocery carts.

Here’s how A&P explained the store’s other innovations in one of its first supermarket advertisements.

We offer these low prices every day because we buy direct, we buy in huge quantities, we sell for cash, and because of our efficient operations. This means savings to us and we pass these savings on to you in the form of LOW PRICES EVERY DAY. … 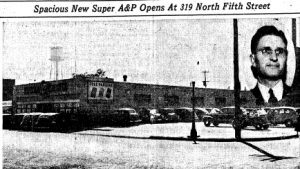 The first Springfield store built specifically as a supermarket was the 9,200-square-foot A&P at Fifth and Mason streets, which opened in September 1940.

“The store stocks practically every known standard food item,” the Illinois State Journal said on opening day. “Each item on the shelves and racks is plainly marked with the purchase price. Another innovation is the use of four wheel ‘gliders’ containing two wire baskets of sufficient size to carry the average family’s grocery purchases for a week. …”

The Fifth Street A&P closed in the mid-1970s. Several businesses occupied the purpose-built store over the next four decades, but the building was vacant and for sale as of October 2019.