Long before there was any Ukrainian presence to speak of in Sangamon County, there was a town with a Ukrainian name.

The town of Mazeppa stood for a few years after 1837 in what is now Ball Township, on the north side of New City Road about a half-mile east of Old U.S. 66 (in the eastern half of the southeastern quarter of Section 11). 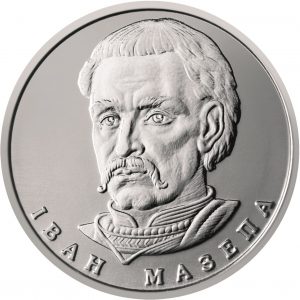 This town took its name from Ivan Mazepa, who was Hetman of the Zaporizhian Host from 1687 to 1708. Recognized by Ukraine as a national hero, Mazepa casts a long shadow in both history and art. His name arrived in Sangamon County by way of Lord Byron’s popular 1819 poem Mazeppa, in which Byron retold a probably apocryphal tale of how, in Mazepa’s youth, the Polish king punished him for adultery by having him stripped and tied to a wild stallion that was set loose across the plains.

The town of Mazeppa was platted and named by George R. Spottswood, who recorded the plat on May 12, 1837. He was the son of George W. Spottswood, who was a grandnephew of George Washington and ran the Rural Hotel in Springfield (and later the Globe Tavern). George W. lived in Springfield and appears to have acted as his son’s agent; his name appears on advertisements for Mazeppa town lots. George R. himself may have lived in or near Mazeppa; at any rate, his name appears in the 1840 census on the same page as those of many Ball Township settlers.

Spottswood’s town was in a woodless spot, a wide prairie between the Sugar and Brush Creek timbers. In choosing the name, perhaps he had in mind some lines from Byron’s poem:

Town—village—none were on our track,
But a wild plain of far extent,
And bounded by a forest black

Whatever he had in mind, the name was a bold choice. Most towns founded in this period just copied an existing place name from a gazetteer. 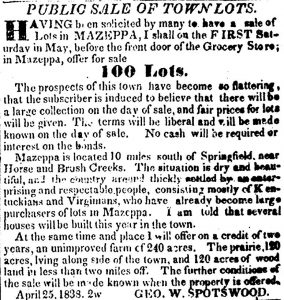 Notice of the sale of town lots in Mazeppa, published in the Sangamo Journal of April 28, 1838. (Courtesy State Journal-Register)

Some Sangamon County towns in this period held their sales in Springfield, the better to attract speculators, but Mazeppa’s lots were sold at the site. After a first attempt to auction off 100 town lots fizzled in May 1838, George W. Spottswood announced that the sale had been rescheduled to coincide with a public meeting in June at the Mazeppa store. He urged every candidate for public office to attend and speak to the pressing issues of the day, including “whether he is for Mazeppa becoming a county seat or not.”

History does not record the candidates’ responses, but Mazeppa did not become a county seat.

Despite these difficulties, with offers of generous terms and no money down, the Spottswoods initially succeeded in getting people to sign up to buy lots. Some purchasers were from the surrounding countryside (which George W. Spottswood described as “thickly settled by an enterprising and respectable people, consisting mostly of Kentuckians and Virginians”). But cash was scarce, and many an “enterprising and respectable” subscriber’s enthusiasm likely flagged when the bill came due. Within a year, George R. was threatening to send the constable after purchasers who had not paid up.

Still, Mazeppa was no mere paper town: it even had a grocery store, remembered chiefly for its whiskey. It also hosted musters of the local militia.

A few people lived in Mazeppa, but not many and not for long. Mazeppa had no church, schoolhouse or town square. Worse, it had no post office – a serious handicap for any settlement in the postal age.

The town had at least one noted resident. Revolutionary War veteran Peter Millington arrived in Mazeppa with his son in 1839, at the age of 102. He died two months after arriving.

Mazeppa did not outlive Mr. Millington by long; it probably was deserted by the early 1840s. In 1851 the Illinois Senate unanimously passed a bill to vacate the town plat. That bill didn’t make it into law, but the town was soon vacated in any event; an 1858 property map shows no trace of it.

Why did this town fail while others prospered? The lack of a post office certainly played a role. In Sugar Creek: Life on the Illinois Prairie (1986), John Mack Faragher compares Mazeppa to Auburn and suggests that the postal service made the difference between Auburn’s survival and Mazeppa’s demise. As the anonymous author of the Ball Township section of the 1881 History of Sangamon County put it, Mazeppa “of course could not flourish, for what place without mail privileges could ever exist?”  Without the flow of traffic that a post office guaranteed it would have been hard to attract either businesses or customers to such an out-of-the-way spot. 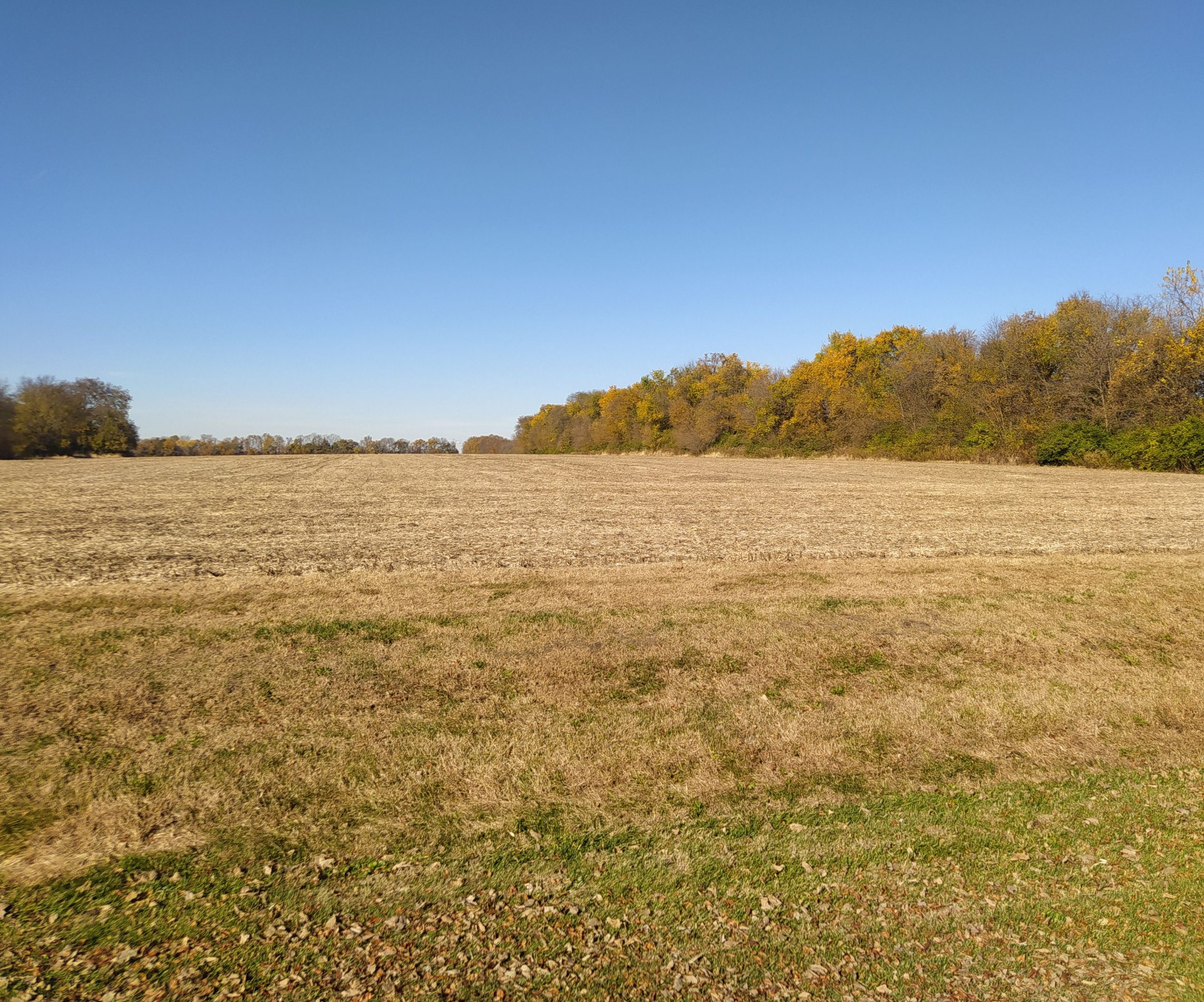 In a 1974 paper for the Sangamon County Historical Society, Robert P. Howard wrote that “Mazeppa disintegrated when Cotton Hill, a mile northward, became a post office.” That is wrong on the details – there was no Cotton Hill post office until 1862, when Mazeppa was long gone, and it didn’t move to that location until even later – but perhaps correct that, in the absence of a post office, people would have had little reason to go to Mazeppa instead of other nearby gathering places.

Mazeppa faced long odds regardless. It was founded at the tail end of a town-founding boom across the Midwest, spurred on by the “town lot fever” of Eastern speculators in the late 1830s. From 1835 to 1837, hundreds of towns were platted across Illinois in hopes of capturing Eastern cash. That boom ended with the long, deep depression that followed the Money Panic of 1837. Mazeppa was platted in April 1837, just before the crash, but lots were not advertised for sale until a year later. With such unfortunate timing, the odds were never in its favor.

Mazeppa was not alone in its fate. Reviewing the hundreds of Illinois towns platted in the 1830s boom, William Walters found that about a third were “paper towns” that were never occupied (such as Sangamon County’s Cicero), while another third have continued to the present day (such as James Town, now Riverton). The remaining third, like Mazeppa, were briefly occupied and then abandoned.

What little there ever was of Mazeppa is now long gone. The 1881 historian averred that “few of the younger generation” in Ball Township knew that this village had ever existed.

Yet even now, when passing the jagged intersection of Old US 66 and New City Road, with a school on one side and a church on the other, one has the odd feeling of passing through the edge of a town that isn’t there.

Objectively, Mazeppa doesn’t have anything to do with that. But you could say the town got its church and school a century too late. If it had a post office, maybe it could have held on long enough to meet them.

George Washington Spottswood (born 1783) was appointed Springfield postmaster in 1841. He still held that office when he died in November 1844.  George Robinson Spottswood (born circa 1810) left Springfield for Missouri  before 1850. He later moved to Florida, where the 1860 census listed him as a laborer. He died in Florida sometime between 1860 and 1870.

Contributor: Samuel Henderson. Henderson works in the legal industry in Springfield. His interests include submerged and buried history and the histories of place and road names.

This entry was posted in Communities, Early residents, Prominent figures. Bookmark the permalink.