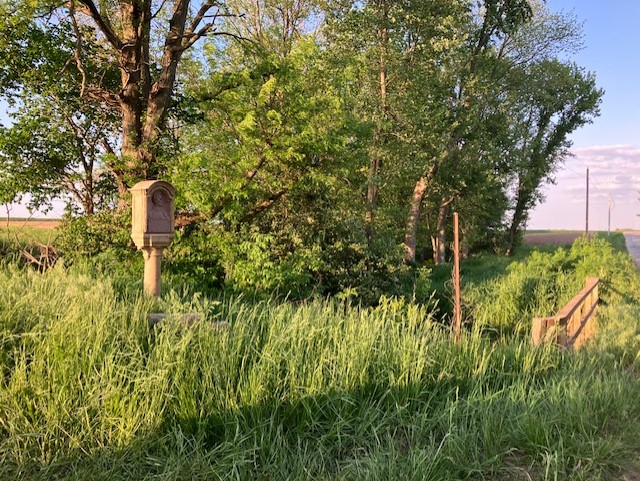 Down a tiny back road southeast of Breckenridge, out of view but within earshot of Illinois 29, stands a century-old monument to the legal career of Abraham Lincoln. Nearly forgotten today, it is one of three dozen markers the Daughters of the American Revolution installed along the route Abraham Lincoln and his legal compatriots traveled on Illinois’ old Eighth Judicial Circuit.

With the support of an ad-hoc group of Lincoln buffs and historians, the DAR in 1921, 1922 and 1923 organized the placement of markers in each of the circuit’s 17 county seats and at 19 points where the traveling lawyers crossed county lines.

The site near Breckenridge, where the circuit riders encountered the Sangamon/Christian county line, “is the most curious of all the county-line markers locations,” Eighth Circuit historian Guy Fraker wrote in 2004 for the Journal of the Abraham Lincoln Association.

The marker consists of a bronze tablet atop a concrete pillar. According to Fraker, the tablet was designed by Edgar Martin (1871-1951) of Chicago, supervising state architect for the Illinois Department of Public Works and Buildings (Martin also designed the Centennial Building – now the Howlett Building – in the Capitol Complex). 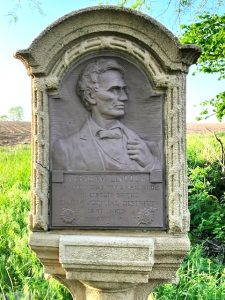 The tablet shows Lincoln as an unbearded young lawyer with the text “Abraham Lincoln traveled this way as he rode the circuit of the Eighth Judicial District 1847 1859. Erected 1922”. It also displays the seals of the National Society Daughters of the American Revolution and the Lincoln Circuit Marking Association, a DAR-affiliated group that coordinated the project.

The tablet was in excellent visual condition when visited in May 2022, apparently because it was restored in recent years – a photograph on a Springfield Chapter NSDAR web site created in 2015 shows heavy oxidation and discoloration at that time.

The site, a quietly pretty glade between a farm field and a small creek, probably is as close as someone can come today to a scene Lincoln would have seen in the 1850s.

The Sangamon County courthouse marker, a bronze plaque, also still exists today, although it’s been moved. When it was dedicated on May 8, 1922, the plaque was on a four-foot-high granite tablet placed on the north side of what today is the Old Capitol State Historic Site. According to an Illinois State Journal story:

The stone tablet was placed to mark the spot where the old courthouse stood at the time that Lincoln was a circuit rider, nearly three quarters of a century ago, when he practiced law in the old eighth judicial district. The story of the old Circuit days was told by Miss Lottie E. Jones, who said:

“I want you to forget your surroundings today, to forget the honk of automobile horns and the rush of traffic, and go back in memory to the time when Mr. Lincoln was a circuit rider. Here on this very spot he practiced law. Here he tried his cases, and studied for the day which was to come when he would be, not merely an humble lawyer in Illinois, but the nation’s chief executive.

There presumably was a similar ceremony when the Breckenridge-area marker was dedicated, but it seems to have been unreported in the Journal. There’s also no mention of such a ceremony in Fraker’s article.

Fraker, however, does note that Springfield speaker Lotte Jones (1854-1933) of Danville was “the most influential and active participant” in the Circuit Marking Association. “A member of the DAR, she was selected as the first chairman of the executive committee in 1916 and served until her death in 1933. All titles aside, she was the association’s ‘czar.’”

Jones’ top assistant, Jessie Palmer Weber of Springfield, said of the marker plan, “It is her (Jones’) pet scheme and she is full of enthusiasm.”

The Circuit Marking Association also installed a marker on the opposite end of Sangamon County, where the circuit trail intersected the Sangamon/Menard county line going toward Petersburg.

“The author has been unable to locate this marker,” Fraker wrote in 2004. “Local residents recall its location on the county line on the east side of Route 97. … There is an oral account of the marker’s destruction several decades ago.” (Menard County’s courthouse marker was dedicated on July 4, 1922.)

All of the courthouse markers remain intact, Fraker reported, although “they tell us what we already know or could readily find out.”

This is not the case with the county-line markers. The efforts and relative success of Lotte Jones in rediscovering these roads and placing the markers is the real contribution of the Lincoln Circuit Marking Association and all those who aided the effort. Finding the roads then in the 1920s—seventy years after the fact – was a difficult task. Finding them now another eighty years later is almost as difficult. …

Traveling from marker to marker creates a sense of what it was like to travel these roads during the time of Lincoln and his contemporaries. The roads are little traveled, some are not paved. All are rural, removed from the frantic pace of today’s world. Each marker’s location is so unheralded that it is almost hidden. Though row crops have replaced the prairie, one still feels the seemingly endless miles, the gentle roll of the land, and the serene flow of its streams. It is essentially the same place where Abraham Lincoln grew from a callow, newly initiated attorney to a seasoned professional with the qualities that our nation demanded. The markers and their roads re-create the central Illinois of that day; traveling these roads between markers creates a sense of the place that these men traversed so long ago.

Directions from Springfield: Take Illinois 29 east to almost 1.75 miles past the Breckenridge turnoff.  Turn right at the 2300N/610E sign, then right again. The marker is three-tenths of a mile farther, on the right side of the road just past the bridge. It was easily visible when visited in May 2022. These directions have been corrected; SangamonLink’s thanks to reader Dennis Kienzler.

Hat tip: To David Wiegers and Scott Schroeder, whose May 14, 2022, presentation at Books on the Square, Springfield, prompted SangamonLink to look up the Breckenridge circuit marker.