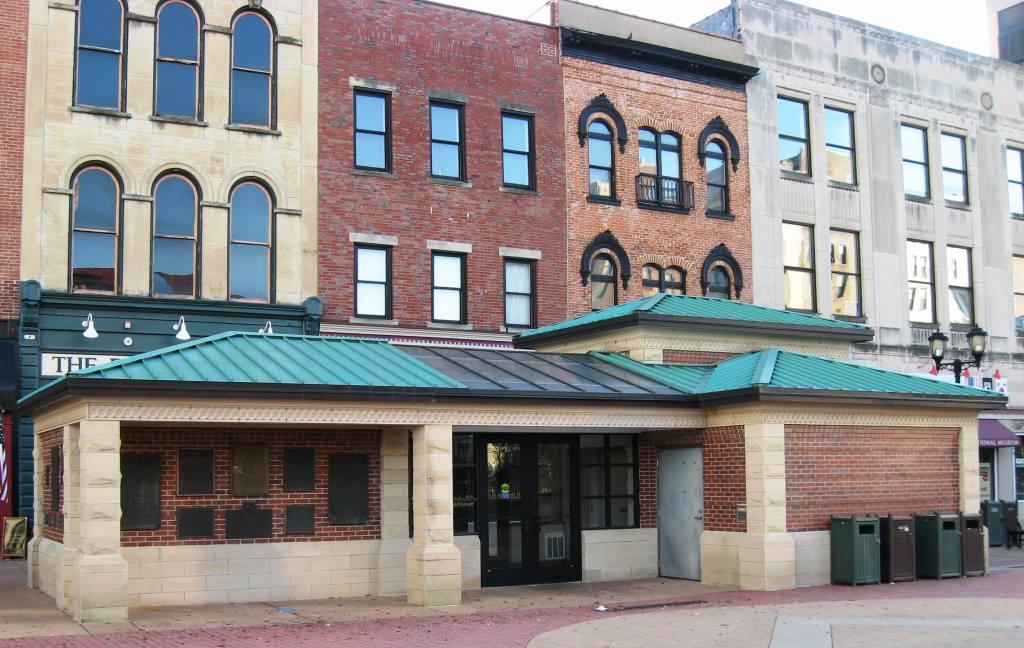 Most date from when today’s Old Capitol State Historic Site served as the Sangamon County Courthouse, and most are in their third location on or near the building. The oldest plaques in the group were dedicated in 1911.

Over the 90 years (1876-1966) when the Old Capitol was used as the courthouse, various groups sponsored the installation of about 30 plaques either on the building itself or on the courthouse grounds.

In the late 1960s, when the building was demolished and rebuilt more or less as Abraham Lincoln knew it, many of the plaques were moved to a “Court of Honor” area, with decorative pillars and a reflecting pool on the southwest corner of the South Old Capitol Plaza. 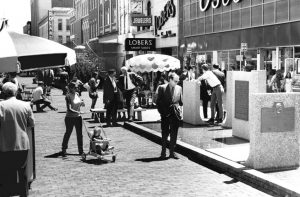 The Court of Honor and reflecting pool on the South Plaza, shortly after the plaza was created. (Sangamon Valley Collection)

The Court of Honor was removed when the South Plaza underwent $1.5 million in renovations. The plaques moved again to the north and east walls of the parking ramp entrance structure (which was renovated at the same time).

Fourteen of the 18 plaques on the ramp entrance date from before the Old Capitol’s reconstruction; the locations of most of the other dozen or so original plaques are unclear.

The reasons behind some of the kiosk plaques are obscure today. Here are explanations.

A bronze tablet listing 24 Revolutionary War veterans buried in Sangamon County was installed at the south entrance to the old courthouse on Oct. 19, 1911, the 131st anniversary of Gen. Cornwallis’ surrender at Yorktown. The plaque was donated by the Sons and Daughters of the American Revolution.

Three more names were added to the list via a bronze addendum installed on Oct. 19, 1914. However, the tablet’s list was still incomplete: later research identified the graves of more than 50 Revolutionary War patriots in the county.

A second plaque identifies 133 veterans of the War of 1812 who are buried in Sangamon County. More than 300 people attended an installation ceremony sponsored by the United States Daughters of 1812 on May 23, 1937. But there was a problem, the Illinois State Journal reported.

After the program had almost reached its completion, the announcement was made that the bronze tablet, bearing the names of 133 soldiers of the War of 1812, was lost in transit. Since there are many Springfields in the United States, it is presumed the plaque was missent. The plaque was found the next day in Springfield, Ohio, and installed, belatedly, on the north portico of the old courthouse.

Among the missing memorials are two honoring the dead from World War I. One, a bronze plaque dedicated by the Springfield Loyal League in 1925, was being held for safekeeping by the late Earl “Wally” Henderson, architect of the Old Capitol, as late as 1974. Its whereabouts are unknown as of 2017.

The other was a glass case, supposedly displaying the names of every county resident who died in the Great War, that originally sat along the Fifth Street sidewalk outside the courthouse. But the list was woefully incomplete.

“There were so many names omitted, it should have been destroyed,” architect Murray Hanes (a WWI veteran) told the State Journal-Register’s Jeff Nelson in 1974. “And it was.”

The Sangamon County Old Settlers Society held unveiling ceremonies for a plaque dedicated to Robert Pulliam, believed to be the first European settler in Sangamon County, on Dec. 2, 1911. The Pulliam plaque originally was on one of the pillars on the south side of the courthouse portico.

Lincoln on the Eighth Judicial Circuit

The DAR also co-sponsored installation of a plaque noting that Abraham Lincoln practiced law in Sangamon County when he toured Illinois’ Eighth Judicial Circuit from 1847 to 1857. 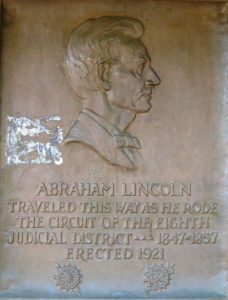 The plaque is part of a series the DAR and its partner, the Lincoln Circuit Marking Association, arranged to be erected in the 14 counties that made up the Eighth Circuit. Nineteen markers were placed on the county lines, and each county seat, including Springfield, received a slightly different version.

Springfield’s plaque was installed on May 8, 1922 (the plaque itself, which says it was erected in 1921, is wrong). The plaque originally was attached to a four-foot-tall granite pillar on the north side of today’s Old Capitol, about where the courthouse stood when Lincoln practiced there. More information on the circuit marking initiative can be read in Guy Fraker’s 2004 article for the Journal of the Abraham Lincoln Association.

The Springfield Historic Sites Commission rededicated the 1922 Eighth Circuit plaque – in the process adding its own plaque to the Court of Honor – on May 8, 1994. The rededication also recognized the founding of the Springfield Chapter DAR in June 1894. The chapter was organized by Kate Chatterton Hickox (1856-1926), who was inadequately described in her obituary as a “prominent Springfield club woman.”

Grand Army of the Republic

Six plaques honor leaders of the Grand Army of the Republic (the organization for Union veterans of the Civil War), but only two of those recognized were Sangamon County residents. 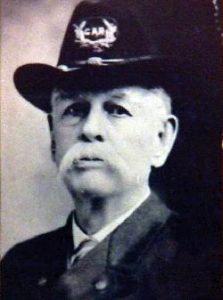 Capt. John Inman (1848-1929) was the only Sangamon County resident ever elected national grand commander of the GAR. Too young for regular service, Inman served two years as a drummer boy for a Minnesota artillery unit during the Civil War. He later moved to Springfield to manage the local Western Union office. When the Spanish-American War broke out, Inman was commissioned a captain in the Signal Corps, serving in Puerto Rico.

Inman had served as Illinois GAR commander in 1899-1900, but his election as national grand commander in 1925 “was due largely to the fact that of the prominent veterans assembled at the gathering, he was the most robust,” the Illinois State Journal said when he died.

Inman’s plaque originally was placed next to an elm tree planted in his memory on the southwest corner of the courthouse grounds. The ceremony took place on Sept. 20, 1932, during the GAR’s 66th annual encampment in Springfield.

Another tablet recognizes Hiram Shumate of Riverton, who was Illinois GAR commander from 1940 until his death in 1948. By then, he was Sangamon County’s last living Civil War veteran.

Four other plaques honor other GAR national grand commanders – James Willett, James Jewel, Edwin Foster and Alfred Stacey. All died between the organization’s 73rd national encampment in Pittsburgh in 1939 and the 74th, held in Springfield in September 1940. As with Inman and Shumate, the plaques originally were installed next to memorial trees planted on the courthouse lawn. Dedication ceremonies took place Sept. 21, 1940. 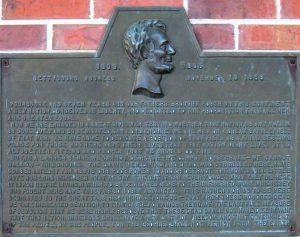 The six GAR plaques went into storage when the Old Capitol was reconstructed. They were mounted in the former Court of Honor in 1992, then moved with the rest to the ramp entrance in 1998.

A seventh plaque, Lincoln’s Gettysburg Address, apparently is one of three dedicated by the Women’s Relief Corps during the 1940 Springfield encampment. The tablets were installed at: the original Illinois State Arsenal in the 400 block of North Fifth Street; the old Carnegie Lincoln Library; and Lanphier High School. The plaque now on the plaza gives no indication of its original location.

A plaque noting that the Donner Party departed from the courthouse square in April 1846 (the plaque gives the date of April 15; the correct date was April 14) to begin its ill-fated trek to California was installed at the courthouse on April 27, 1957. Among those at the ceremony were two children descended from the party’s namesake, George Donner. The Wabose Society, Children of the American Revolution, presented the plaque to the city of Springfield.

The plaque apparently was originally located on the courthouse’s south portico.

On April 25, 1861, two months before he died, Stephen A. Douglas, Abraham Lincoln’s political rival, delivered his last important speech in the Old Capitol. While he opposed Lincoln and the Republicans, Douglas said, all Americans had a duty to obey the Constitution and preserve the Union.

The centennial of Douglas’ “Protect the Flag” speech was commemorated on April 26, 1961, by placement of a plaque sponsored by the Springfield Historical Sites Commission. The plaque, originally placed on the south portico of the old courthouse, was unveiled by Robert Dick Douglas of North Carolina, Stephen Douglas’ great-grandson. 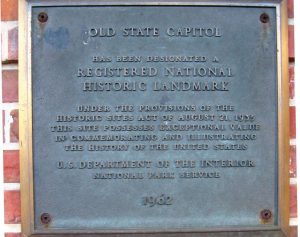 The old courthouse was officially designated a Registered National Historic Landmark by the U.S. Department of the Interior in an announcement made Feb. 18, 1962. The building’s status was celebrated two weeks later at a banquet held for the 125th anniversary of Springfield being named the state capital. At the banquet, sponsored by the Sangamon County Historical Society, nine tall civic leaders portrayed the “Long Nine” legislators who engineered the transfer of the capital from Vandalia; Harlington Wood Jr. portrayed Abraham Lincoln.

Aside from the recognition, the bronze tablet noting the courthouse’s landmark status was the only tangible benefit Sangamon County received as the result of the designation. However, negotiations already were under way in 1962 for the state of Illinois to buy the courthouse from Sangamon County and return it to its appearance during the Lincoln era.

The Springfield Historical Sites Commission was the sponsor of a plaque noting that both Abraham Lincoln and Ulysses S. Grant worked in offices at the Old Capitol and that 5,000 Sangamon Countians served in the Civil War.  The tablet, dedicated April 14, 1971, was the first to be installed directly at the then-new Court of Honor rather than being transferred from the old courthouse.

Eight hundred members of the Potawatomi tribe of Native Americans passed through Springfield on Sept. 29, 1838, during their forced removal from Indiana to Kansas, a trek known as the “Potawatomi Trail of Death” because of the number who died on the way. The event is recognized by a plaque installed on the ramp entrance in 2000. Markers elsewhere note three Potawatomi campsites in Sangamon County.

The South Old Capitol Plaza also marks the end of an eight-site walking tour of locations related to the 1908 Springfield Race Riot. After nearly a century of ignoring the riot, city officials and others created the walking tour in 1994 and updated the sites, including the Old Capitol Plaza marker, as part of a  centennial observance in 2008.

Hat tip: Thanks to Stephanie Martin of Lincoln Library’s Sangamon Valley Collection for her help determining the date of the South Plaza reconstruction.