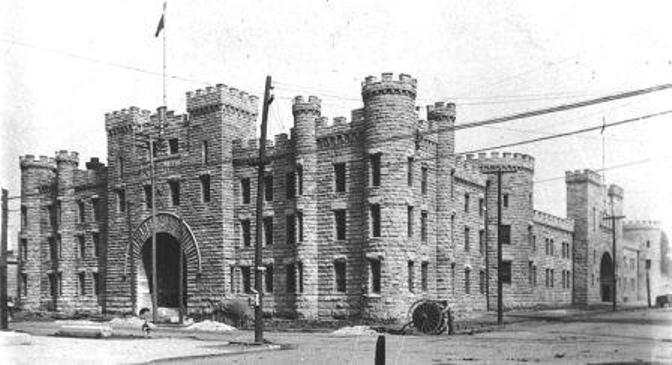 President Theodore Roosevelt dedicated the new Illinois State Arsenal  at Second and Monroe streets on June 4, 1903. The structure, designed by Bullard & Bullard architects and built at a cost of $150,000 by the Culver Stone and Marble Co., resembled a medieval fort, complete with turrets and battlements, and was popularly known as The Castle.  The building replaced the state’s Civil War-era arsenal on North Fifth Street.

In addition to its military functions, the new building housed the collections of the Illinois Natural History Museum, which for years had been haphazardly kept in the Statehouse. However, the museum space on the building’s second floor was too small, and what would become the Illinois State Museum languished until it moved into the new Centennial Building in 1923.

The climax of the arsenal’s dedication day was a grand ball for which two bands provided dance music in the brilliantly lit space. According to the May 20, 1903, Springfield News, “It is an occasion when every lover and worker for the city, no matter whether a merchant or clerk, may enter on the same plane and do his part to make the celebration a success.”

In August of 1908, after mobs of whites rampaged through central Springfield committing murderous assaults, looting, and arson against its African-American residents, Gov. Charles Deneen designated the arsenal as a temporary refuge for riot victims.

The Illinois State Register described the scene at the arsenal:

Innocent old men, who have lived here for years, tottering old women in white hair.., children in their teens and babies are mixed up in this sorry spectacle, their faces withered in anxiety…. When bedtime came all the older people placed chairs together and on comforts (quilts) rescued from their homes during the day, made the children and the babies comfortable. The old women were sleeping on their chairs. The men were making out on the hard floor.

On Saturday, Aug. 15, crowds that had been dispersed by state troops earlier in the day regrouped and marched to the arsenal with the intention of attacking the black refugees inside. Militia on duty there charged them with bayonets fixed, and the mob scattered.

Six months later, on Feb.  12, 1909, the 100th anniversary of Lincoln’s birth was held at the state arsenal, which had been decorated with flags, potted ferns, and, across one end of the cavernous hall, a massive portrait of the slain president draped in red, white, and blue bunting. Nearly 760 guests in formal attire were watched by 1,200 spectators as they dined and listened to addresses by William Jennings Bryan and the British ambassador to the U.S.

The prestigious Lincoln Centennial Association, which organized the banquet, had refused to allow African-Americans to attend. The city’s black citizens held their own observance in honor of the man who had “made freedom a reality in their lives” at St. Paul’s A.M.E. Church in eastern Springfield.

Among celebrities who performed or attended functions at the arsenal over the years were Will Rogers, King Albert of Belgium, John Philip Sousa and his band, Arturo Toscanini and the La Scala Orchestra, and presidents Calvin Coolidge, William Howard Taft, Herbert Hoover and Franklin D. Roosevelt.

Its size made the arsenal a popular venue for exhibitions, concerts, and balls. Car shows drew large crowds every year. On May 29, 1929, band leader Paul Whiteman and his orchestra drew a crowd of 5,000 to a noon-hour concert featuring the young Bing Crosby and the Rhythm Boys. 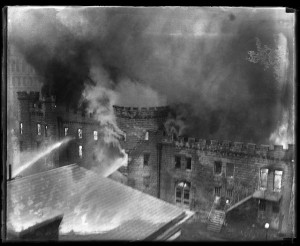 On Sunday, Feb. 18, 1934, fire broke out in the arsenal. The spectacular blaze ignited some of the ammunition stored there, and spectators reported that the rifle rounds going off sounded like popcorn popping; happily, firefighters prevented 150 pounds of dynamite stored in the basement from exploding.

While there were no serious injuries, the fire destroyed the building and its contents. After a three-month investigation, the state fire marshal announced that the fire had been started by a 10-year-old boy from a troubled family who liked to watch things burn. The boy, Cecil Kiper, had set fire to a paper bag weighted with lead solder and threw it onto the Arsenal stage, setting the curtains on fire.

The young arsonist was identified using accounts of an arsenal janitor who had seen a  young boy who had reported a fire in a restroom wastebasket. Kiper was taken into custody at Douglas School, where he was in the fourth grade.

Plans to replace the building were begun immediately, and its successor, the Illinois State Armory, opened in 1937.

The fire also contributed to construction of another new state building, the Illinois State Archives. Irreplaceable records of the state military department had been destroyed in the arsenal fire, which  prompted the American Legion to support construction of the new, fireproof Archives building, despite the start of the Great Depression. (The Archives building now is named after the long-time director of the archives, Margaret Cross Norton.)