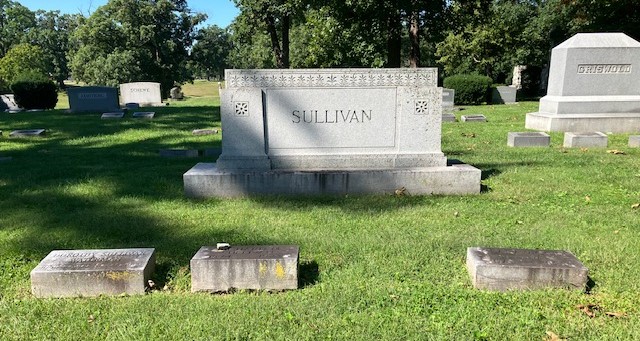 All four victims of the train disaster are buried in the Sullivan family plot at Oak Ridge Cemetery. (SCHS photo)

Dick Sullivan, reputed to be Sangamon County’s behind-the-scenes political master for the first two decades of the 20th century, died in a violent train collision in New York state in 1923.

All were asleep in a Pullman coach at the back of the lead train. The following train “telescoped” the last several cars of the first train, news stories said. The bodies of the victims were badly mangled – Dick Sullivan was identified only because of an old surgical scar, and Alma Stureman by her wedding ring.

“Word of the tragedy cast gloom over the wide circle of friends of the wreck victims in Springfield and vicinity,” the Illinois State Journal said the day after the accident.

Mr. Sullivan had long been recognized as Republican leader in Sangamon county and was prominent in party ranks in the state. His son-in-law, Robert V. Stureman, was a member of the firm of Stureman-Buttrick company, heating engineers and contractors, and was a veteran of the World war. Mrs. Stureman and Mrs. Sullivan enjoyed a wide acquaintance in this city.

The Illinois State Journal published photos of three of the victims. Clara Sullivan disliked photos of herself, but was planning to have one taken in Chicago at trip’s end. (Courtesy State Journal-Register)

The two couples were returning to Springfield, in roundabout fashion, after a two-week trip east. Their tour had included a Thanksgiving visit with Dick and Clara Sullivan’s other daughter, Dorothy, a student in Washington, D.C. The Sturemans were survived by their three-year-old daughter Louise, who had been left in Springfield in the care of a nurse.

A century later, it’s tough to separate hyperbole from substance when evaluating Dick Sullivan’s role in local and state politics. His opponents – primarily Democrats and their captive newspaper, the Illinois State Register, but also a substantial number of aggrieved Republicans – probably exaggerated the extent and nefariousness of Sullivan’s influence.

But maybe not by much. The Sullivan organization demonstrated just how far it would go to hold power in the infamous 1910 Springfield Park Board election. Sullivan allies stuffed ballot boxes, hindered opposing election observers and stole voter records in a blatant attempt to control park patronage. Courts eventually overturned the election, but not before 13 poll workers were indicted for violating election laws.

When he died, however, his supporters depicted a mirror-image Sullivan: a natural leader, an intensely loyal friend and an honest political broker.

J. Emil Smith was a city commissioner when Sullivan died (Smith later would serve as mayor and eventually as editor and publisher of the Illinois State Journal).

“Dick Sullivan was my best friend,” Smith said on hearing of the deaths of the Sullivan family.

The enemies he had were political and many of them were enemies because they had been prejudiced against him. They did not know him. They thought of him as he had been pictured in politics – a boss.

These enemies figured Dick Sullivan supported candidates for office with the understanding they do his bidding. I know different. Dick Sullivan never asked an office holder to do anything but what was right.

I have never forgotten what he said to me when I was first elected commissioner eight years ago. His words were: “You have been elected. All I want to ask of you is to run your office and run it right. Good business is the best kind of politics.”

Also commenting on Sullivan’s death was Dr. John A. Wheeler, then superintendent of the Lincoln State School and Colony. Wheeler (1871-1925) also was a Republican, but the party split during the 1922 election season.

Wheeler was the incumbent state senator, but in 1922, Sullivan and his regular Republicans backed Earl Searcy instead. Searcy won the GOP nomination, but Wheeler refused to give up. Running as an independent that November, Wheeler made Sullivan the focus of his campaign.

“The Sullivan-Mester vice organization possesses unlimited funds wrung from the pockets of fallen women and levied on the bootlegger and other law violators in Sangamon county,” Wheeler charged in one speech. (Henry Mester was Sangamon County sheriff.) 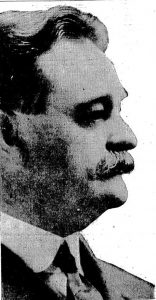 “Not satisfied with assessing the bootlegger and the brothel madam and the street walker and the gambler and the holdup man and the automobile thief, is it true that this organization seeks to control all city and county contracts solely for the purpose of giving the citizens of the county and the city the best civic government and the best of improvements for the low dollars? Or is it to furnish funds for Dick’s machine?”

But when Sullivan died a year later, Wheeler changed his tone.

“We, of course, had our political differences, at times, but nothing ever interfered with our friendship,” Wheeler said. “I greatly admired Dick Sullivan, not only for his political sagacity, but for his qualities as a friend.”

Sullivan, who grew up in the north-end suburb of Ridgely, was a precocious politician, according to his Register obituary.

He was known at the fair grounds race course as a vendor of programs clad in a jockey’s uniform and multiplying his sales by his magnetic way of reaching the people.

At sixteen he became interested in politics. He was a conspicuous figure in republican torch light parades famous in those days. Organization interested him. At nineteen, before he was of voting age, he was chosen precinct committeeman with important assignments to look after.

Sullivan also was an outstanding baseball outfielder and catcher. In addition to playing for a number of Springfield teams, Sullivan was called on frequently – probably for cash – to fill in on town teams around central Illinois. (Despite his prowess, Sullivan apparently wasn’t physically imposing – he was nicknamed “Little Dick” and “the Little Boss.” Sullivan’s World War I draft registration listed both his height and build as “medium.”)

Sullivan narrowly defeated Democrat Lee Metcalf to become county treasurer in 1902. His four years in office appear to have been competent, transparent and scandal-free.

He didn’t run for re-election in 1906. The 1906 election, however, cemented Sullivan’s reputation as Sangamon County’s Republican party “boss” – thanks to the Register, which gave Sullivan the label in hundreds of stories, editorials and throwaway mentions. The paper’s editorial page often blasted “Boss Sullivan” a half-dozen times in a single day.

Boss Sullivan’s opinion of himself and his ability to make the voters vote to perpetuate him as Boss is great. It paints him in his own mind about as follows:

One would think from what he says that he carried the votes of the republicans of Sangamon county in his pocket and that he had a mortgage on a large number of democratic votes. The voters of Sangamon county are going to puncture that “bag of gas,” and a good many of those voters are honest republicans who are disgusted with Sullivan’s assumed dictatorship of the party.

The Register’s tactic of tarring all Republicans with the “Boss Sullivan” brush apparently worked. The GOP swept county offices in 1906.

Notwithstanding the Register’s rhetoric, however, it’s not at all clear that Sullivan’s word was law among local Republicans. In his only other try for public elective office, Sullivan sought the Republican nomination for state representative in 1908. Two candidates were nominated; Sullivan came in third.

And when he died, Sullivan was in the midst of a battle to deny Len Small, a Kankakee Republican, renomination as governor. (Among other things, Sullivan and his minions were suspected – probably accurately – of spreading a 1921 rumor that Small wanted to move the Illinois State Fair out of Springfield.) At the end of their fatal East Coast trip, the Sullivan family planned to stop in Chicago so Dick Sullivan could meet with state Sen. Thurlow Essington, who intended to challenge Small for the 1924 Republican nomination as governor.

In the 1922 primary, Sullivan’s regular Republican ticket won most of its races, but Republican Club candidates still ran up respectable totals: Wheeler, for instance, got 8,147 votes versus Searcy’s 11,028 for the Republican nomination for state senator.

Whatever the extent of his party influence, Sullivan reportedly had told several friends that, after the 1924 election, he planned to retire from politics to focus on his real estate business.

In the April 1924 GOP primary, perhaps as a eulogy for Dick Sullivan, Essington received 1,200 votes more than Small in Sangamon County. Small, however, won the Republican primary statewide. He went on to be re-elected governor that November.

Dick and Clara Sullivan are buried in the same plot at Oak Ridge Cemetery as Alma and Robert Stureman. (Also buried in the Sullivan plot are Dorothy Sullivan Waterman (1905-89), Harriet Louise Stureman (1920-88), and Agnes Sullivan McCartney (1878-1966), Dick Sullivan’s sister.) One side of the family tombstone says “Sullivan.” The other side says “Stureman.”