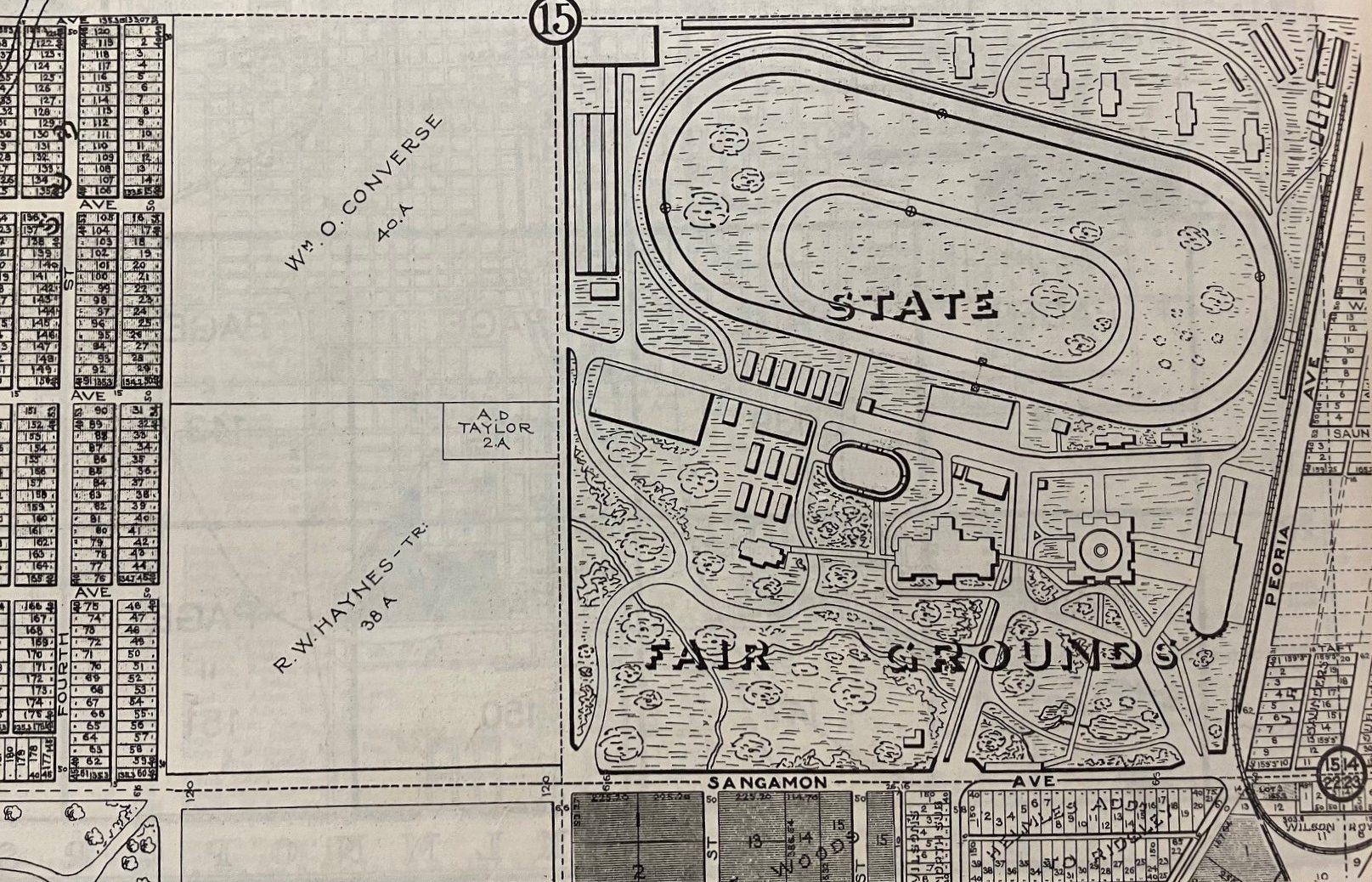 The Illinois State Fairgrounds took in 156 acres in 1922, and its western border was Eighth Street extended. This 1914 map shows the site’s old boundaries. The state bought the 80 acres west of the fairgrounds — owners identified here as R.W. Haynes, A.D. Taylor and William O. Converse — in 1923, along with 128 acres (not shown) north of the site. Eighth and Fifth streets ended at Sangamon Avenue in 1914; a  corner of Lincoln Park is at bottom left. (Sangamon Valley Collection)

The big question after the 1922 Illinois State Fair was whether there would be another one in 1923.

On one level, the problem involved ownership of the fairgrounds. When Sangamon County turned the former site of the county fair over to the state in 1893, the deed required the state fair to be held at Springfield. If the state moved the fair, or didn’t hold one for two consecutive years, the deed provided that the property would go back to county ownership.

In 1921, the General Assembly and Gov. Len Small set aside $450,000 to replace the fairgrounds Dome Building, which had burned down in 1917, and $100,000 more to expand the fairgrounds. However, state law said the money couldn’t be spent unless the state had clear title to the property, which the 1893 deed didn’t provide.

But the issue was complicated by a deep suspicion in Springfield that what Small really wanted to do was move the state fair somewhere else – probably the Joliet area. The Sangamon County Board of Supervisors summarized the local outlook in a history of the dispute approved in 1923:

As a result, in June 1921, county supervisors resolved, 47-0, that the county “shall not give a deed which by its terms shall release the permanent location of the annual State Fair from its present site.”

That’s where things still stood in December of 1922, when Small wrote a letter that panicked local leaders.

Writing to state Rep. Samuel Moore(1877-1963), of Williamsville, Small warned that a 1923 fair would be impossible without immediate repairs to buildings at the fairgrounds. Money to do the work was available in the 1921 appropriation, he wrote, “but the law is clear regarding the title of the grounds and must be complied with before it will be possible for the department of agriculture to proceed with another fair.”

Small denied that he had ever wanted to move the fair.

“As you know, I have a great pride in the state fair at Springfield,” he wrote. “I have helped to build it. For more than twenty years as a member of the old state board of agriculture, I labored for its success and have many pleasant memories connected with it and its growth. I should not now like to see it abandoned or moved, but the law is clear and explicit.”

In addition to the $550,000 appropriated in 1921 (state budgets were on a two-year cycle at the time), Small pledged to support another $500,000 in fair spending during the 1923 legislative session. All that money would be set aside for the Springfield fairgrounds and nowhere else, he said – but only on condition that Sangamon County gave the state unqualified possession of the site.

If not, he added ominously, “Chicago, Peoria, Aurora and several other cities are expected to immediately become bidders for the fair.” 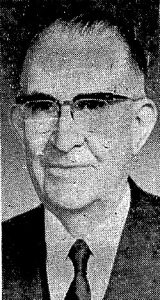 Sangamon County caved in less than a month. Under pressure from the Chamber of Commerce, both newspapers and many others, the board of supervisors reversed itself – again unanimously – and voted Jan. 11, 1923, to give the state the deed it wanted.

Board members did not, however, admit they had been wrong in their 1921 vote. The difference, supervisors said in the 1923 resolution, was that, this time, the governor had given a firm promise to keep the state fair in Springfield. As a result, the board boasted, both the 1921 and 1923 votes “saved to Sangamon County the permanent location of the Illinois State Fair.”

Ethically, Len Small was no better than he should have been. But as governor, he was a builder, and he kept his promises when it came to the fair.

Once the county acted, the Small administration more than doubled the size of the fairgrounds, adding 80 acres to the west side of the grounds and 128 acres to the north.

“A renovation such as few public enterprises have ever received has been accorded the buildings and grounds of this fair,” the Illinois State Journal reported a few days before the 1923 fair.

“From the roof down to the plumbing in the basement, each building has been overhauled. From the main entrance to the stock barns far in the rear the whole grounds have been polished up so that the place scintillates in a garb of yellow and green paint. Even the quarter posts around the race track have been dressed in red and white, looking like brand new barber poles.”