J. Emil Smith wrote a daily column, “Making Conversation,” for more than 28 years, starting when he became editor of the Illinois State Journal in 1930. Much of the column was made up of briefs, jokes, poems and birthday notices for friends and acquaintances. But “Making Conversation” often started with a longer essay or reflection on the news.

One of Smith’s most evocative pieces, published on Oct. 16, 1935, described downtown Springfield late at night.

Strolling through the down-town streets of Springfield late at night and in the small hours of the morning one soon realizes that while the city’s activities slow down, the city as a whole never sleeps.

It’s interesting to note the number of people whose work or habits keeps them up while the great majority is slumbering. And, it’s interesting also to observe the familiar figures who have become a fixed part of the night life of Springfield.

Skipping along the streets from 11 o’clock until long after the midnight hour has struck, with a bundle of Chicago newspapers under his arm, is “Jonesy,” the newsboy. He makes all the hotels, restaurants and night clubs selling papers. Patrons are prone to joke with him but he doesn’t answer unless some one hops him up about being a Democrat. “I wouldn’t vote for the best Democrat on earth,” is his retort.

Then a few minutes before 1 a.m. “Jupe” Bachman, the newsie, comes hustling along. He sells the first editions of The State Journal.

The stillness of the night is broken by Ed DeCrastos, the hot tamale man. He is dressed in a white uniform and wheels his baby buggy steam table over the down-town sidewalks.

Swinging his club, Policeman Fred Metzke, one of the city’s most faithful cops, can be seen traveling his beat on the square from 11 p.m. to 7 a.m.

Now we observe Edward Bogardus, chief of the merchant police and his aids, trying front and back doors of the business houses to see if they are securely locked.

The last show of the Orpheum theatre is over. Ernie Lang, maestro of the orchestra and one of the city’s best dressed men, comes out for a breath of the night air before retiring.

“Buck” Kid, flashy dresser, is walking down the street with his top coat thrown loosely over his shoulders.

A Chinese employe of the Oriental café is taking a stroll before the restaurant is closed for the night. He is enjoying a cigarette.

The lights of the Club Lido in the Abraham Lincoln hotel have been turned off and Ray Capella, leader of the band, and his soloist, Russ Canham, emerge from the hotel.

The last customer at the Leland hotel bar has been served and John P. Maloney, the bartender, hurries down to Sixth and Monroe streets to wait for the owl car to carry him home.

A group of young folks who have been to a dance enter Huskey’s restaurant where Tom Kelly serves the patrons with those fine dishes prepared by Johnny Mills.

Tommy Nolan, genial hotel clerk, is back of the desk at the Empire hotel. Johnnie Connors, proprietor of the hotel, doesn’t remain up as late as he did. His sons, however, hold up the family tradition. “Buster,” the eldest, and Tommy and Mike, the twins, can be found each night on duty.

Around the corner at Fourth and Jefferson streets, Harry McNulty’s restaurant is a popular place and well patronized.

And, so we might go on with glimpses of places and people who figure in the night life of Springfield but it would take far more space than this column affords. It is enough to repeat that it is interesting to stroll through the downtown district long after the shades of night have fallen. 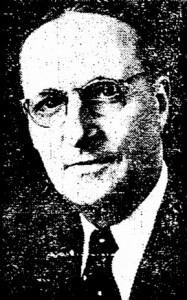 J. Emil Smith (1880-1969) was a politician as well as a newspaperman. In Always My Friend (1981), a 150th-anniversary history of the State Journal-Register and its predecessors, Andy Van Meter synopsized Smith’s early career.

Since graduating from the Springfield schools in 1897 at age 16, Smith had worked for the Morning Monitor, the Evening News, the Illinois State Register and finally the Journal. He had been elected city clerk (in 1907) with the Journal’s support, but his subsequent alliance with the city’s corrupt politicians had earned him the ire of his former employers. The Journal now (in 1911) roundly denounced him as unfit for public office.

Smith later “moved into the clean government camp,” as Van Meter put it, and was elected to the first of three terms as finance commissioner in 1915. He still held that office in 1926, when Mayor Samuel Bullard died. The city council appointed Smith to replace Bullard, and he was overwhelmingly elected in his own right the next year.

Smith resigned the post, however, in 1930 in order to begin his tenure as Journal editor. He was promoted to publisher of both the Journal and the Illinois State Register in 1942, while continuing to edit the Journal. Smith was named publisher emeritus in 1955, but continued to write his column until February 1959.

Despite his own background in municipal office, Smith as editor supported his reporters, according to a Journal editorial published when Smith died.

Once a City Council, irritated at a reporter’s coverage of their activities, adopted a formal letter requesting that Mr. Smith either fire the reporter or assign him elsewhere. Emil Smith gave the reporter a raise.

(H)is final “Making Conversation” column stated simply that he only hoped his efforts at writing it had made some days more pleasant for those who read it.

These final published thoughts of his own are a fitting epitaph for a life well lived.