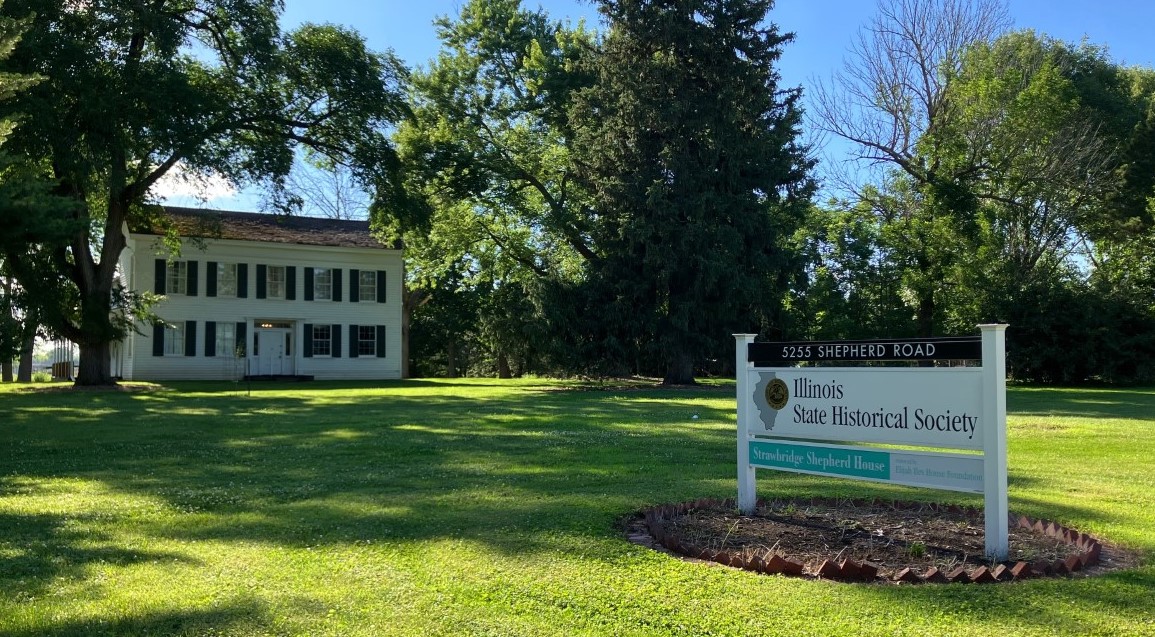 Thomas Strawbridge Jr. (1798-1880) was born in County Donegal, Ireland, one of seven children of Thomas and Jane Mitchell Strawbridge. Thomas’ mother died in May 1809, when Thomas was only 11 years old.

The year following her death, the Strawbridge family left Ireland and immigrated to America, landing in Baltimore, Md., in May 1810. They lived briefly in Pennsylvania and moved in the fall of 1811 to what is now Clark County, Ohio. There, young Thomas learned saddle and harness making.

In 1823, when Thomas was 25, he and his father moved to Sangamon County, and by 1824, Thomas Jr. was living and making leather saddles and harness in a small frame building he erected at the northeast corner of Fourth and Jefferson streets in Springfield. Strawbridge was central Illinois’ first saddlemaker. 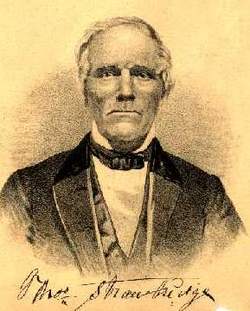 In 1841, Strawbridge bought 680 acres of quality farmland in Section 26, Woodside Township, from the estate of Thomas Iles (the father of pioneer Springfield merchant Elijah Iles). There, he built the first phase of what is now the Strawbridge-Shepherd House, 5255 Shepherd Road near both Lincoln Land Community College and the University of Illinois Springfield. Strawbridge lived at the farmhouse from the time it was built until he died.

The 1850 Census lists Strawbridge as a farmer, not a saddler, even though at least two sources indicated that he retained possession of his saddle shop until 1860. He probably entrusted day-to-day management of the saddle business to another man, checking on things when he came to town from the farm. His daily duties as a farmer probably also were more management than manual labor, for he employed hired men and had a full-time tenant.

Strawbridge never married. He was very close to his sister, Mary Strawbridge Lyons (1800-83), and a number of people lived with him at his house, including an orphaned boy from Germany and a servant. Strawbridge was highly respected in the community, and the word “generous” crops up consistently in descriptions of him. During the Civil War, he made almost daily trips to Camp Butler, hauling loads of farm produce to supply Union troops training there and later to provide for Confederate prisoners. He refused to accept payment for his produce.

Strawbridge’s grave marker in Oak Ridge Cemetery, carved by Springfield tombstone artist Edward Levanius, consists of twin shafts of white marble. Carved in the marble is a sheaf of wheat (symbolic of life), and a broken tree trunk, two fallen roses and a wreathed urn (symbols of death). A chair on one side of the marker holds Strawbridge’s hat; on the other side is another chair with Mary Lyons’ cloak. A hitching post in front completes the monument.

Strawbridge’s will included provisions for Lyons, 10 relatives and a servant. Bequests also were left to 10 churches, either directly or as funds to educate African-American “freedmen.” Separately, Strawbridge bequeathed $1,000 to the Freedmen’s Aid Society, which helped establish schools and colleges for African- Americans. Most of Strawbridge’s estate, however was left to Springfield’s Home for the Friendless.

On March 13, 1883, a month after the death of Mary Lyons, Charles M. Shepherd (1841-1910) bought 320 acres of the former Strawbridge farm from the Strawbridge estate. The purchase included the Strawbridge house.

Shepherd was born in Sangamon County (his family had moved here from West Virginia) and grew up a few miles from the Strawbridge farm. He studied at Illinois State University in Springfield (the school wasn’t connected to today’s ISU) before the Civil War. Shepherd served in the Union Army from July 1861 to August 1864, participating in half-dozen battles, including the siege of Vicksburg. He returned to farming on the Shepherd homestead after the war; in 1869, he married Sarah Ford (1850-1908) of nearby Ball Township.

The Shepherds moved into Thomas Strawbridge’s former home after Shepherd bought the site in 1883. Charles Shepherd expanded the farm over the years and at one time owned 732 acres constituting one of the best and most modern farms in central Illinois. He was known to fatten annually six to eight carloads of cattle and hogs.

Shepherd was active in political and civic circles. A Republican, he was elected to the Sangamon County Board, he was a school director for about 15 years and belonged to the Grand Army of the Republic and the Farmers Mutual Benefit Association.

The property remained in the Shepherd family until 1970, when Sangamon State University (today’s University of Illinois Springfield) bought the site.

Although owned by SSU/UIS, the Strawbridge-Shepherd House was unoccupied and on the verge of demolition when the Elijah Iles House Foundation partnered with UIS to preserve and restore the house.  The Iles foundation raised more than $200,000 to do so, and the Illinois State Historical Society subleased the property in 2014.

The house, which contains 10 principal rooms and nearly 3,000 square feet of usable floor area, was built in four phases over a 50-year period from 1845 to about 1895 – the original 1845 house, additions in 1850 and 1865 and late-19th-century alterations. Except for the removal of a later porch and replacement of some windows, the house retains the style and character of each phase as originally built and has changed very little since 1900.

The house was designated to the National Register of Historic Places in 2015. “Today, the house has a high level of historical integrity after the careful restoration effort,” the registration form reported.

When the ISHS moved into the Strawbridge-Shepherd House, the Iles House Foundation’s then-president, Sue Massie, commented:

From the beginning of the preservation efforts in 2006, the Iles Foundation’s vision was to restore the house to its 1840 appearance and to find a compatible use for the property.

Our dreams have literally been fulfilled. The Illinois State Historical Society is the perfect fit, and we look forward to their occupying the house.

Note: This entry was adapted from the March-April 2014 edition of Illinois Heritage magazine, published by the Illinois State Historical Society. SangamonLink thanks the ISHS.