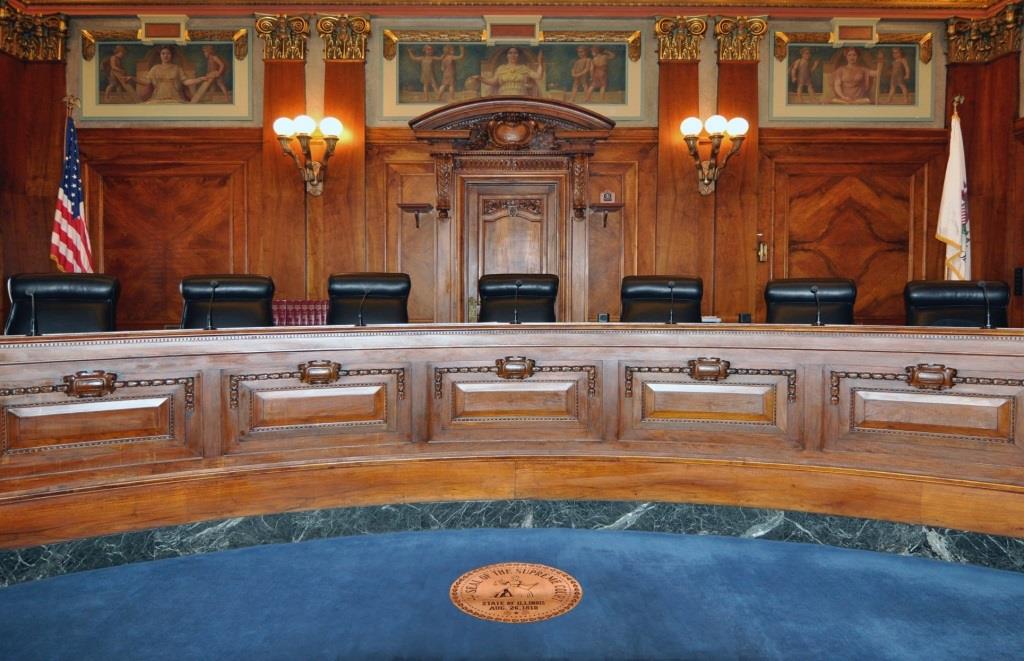 The first public art Albert Krehbiel created apparently was on the buggies, carriages and delivery wagons his father manufactured in Iowa. His most famous works, however, are the 13 allegorical murals that decorate the Illinois Supreme Court Building in Springfield.

Krehbiel (1873-1945) – the name is pronounced “CRAY-bull” — was an instructor at the Art Institute in Chicago in 1907, recently returned from four years study in Europe, when he entered a competition to create murals for what was then known as Illinois’ “Temple of Justice.” (The structure originally housed the central Illinois appellate court and the office of the attorney general, as well the Supreme Court.)

A total of 22 artists from across the country vied to win the murals commission, but a panel of state officials unanimously named Krehbiel the winning artist. His contest entry, a full-size mural titled “Justice with Precedence and Record,” featured Krehbiel’s wife Dulah Evans Krehbiel, an accomplished artist herself, as the model for the central figure.

An almost identical version of “Precedence and Record” eventually was installed as one of the 10 murals on the walls of the Supreme Court courtroom. The concepts behind some of Krehbiel’s other court paintings, however, changed in puzzling ways over the four years Krehbiel worked on them. 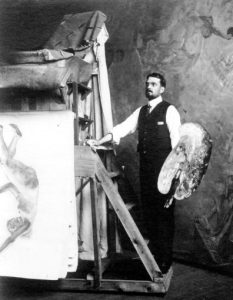 Age 34 when he won the competition, Krehbiel already had amassed a sheaf of artistic awards. He grew up in Denmark, Iowa, where his father, John Jacob Krehbiel, built wagons and buggies.

“Decorating his father’s brilliant wagons – together with schooldays filled with drawing caricatures of teachers and students – installed in the boy a passion for painting and color,” his daughter-in-law, Rebecca Krehbiel, wrote in a 2010 profile. “Albert Krehbiel’s only desire was to enter the field of art – totally against his family’s wishes.”

His skeptical father nonetheless financed Albert’s early training at Bethel College in Newton, Kansas, and then at the School of Design and Painting in Topeka. Rebecca Krehbiel:

Family legend has it that in the late 1890s Krehbiel’s talent was discovered by the director of the Art Institute of Chicago, William Merchant R. French, during one of his frequent lecture tours through the West. With French’s encouragement, Krehbiel enrolled at the Art Institute. Family tradition further has it that he pedaled his bicycle from Newton to Chicago.

After five years in Chicago, Krehbiel won an Art Institute scholarship for further study in Europe. From 1903 to 1906, he distinguished himself at the Academie Julian in Paris, winning four gold medals – reportedly a first for an American artist – as well as the Prix de Rome.

On returning to the U.S., Krehbiel joined the faculty of the Art Institute and married Dulah. They set up housekeeping near Park Ridge, and Krehbiel won the competition for the Illinois Temple of Justice paintings. The results were three large panels – one on the ceiling of the Supreme Court courtroom, and both a ceiling mural and a wall panel in the former Appellate Court courtroom – plus 10 smaller murals that line the tops of the walls in the Supreme Court room.

Both the subjects and the arrangement of the murals changed while Krehbiel was working on the paintings. The murals weren’t finished when the building was dedicated in 1908, but an Illinois State Register article at the time described Krehbiel’s plans.

One change involved the elimination of what the Register said would be a gallery in the appellate courtroom. It would have featured “portraits of men who have achieved distinction in law, and lovers of mankind generally,” and the Register listed nine likely candidates for inclusion.

One of those, however, was former U.S. Supreme Court Chief Justice Roger B. Taney. He wrote the 1857 Dred Scott decision, which declared that African-Americans “were so far inferior, that they had no rights which the white man was bound to respect.” Abraham Lincoln, a severe critic of the Dred Scott ruling and no fan of Taney in general, also was on the portrait list, but so was Stephen Douglas, whose reputation on racial matters has slipped in the 21st century. It isn’t known why the portrait gallery was abandoned, but the decision clearly saved the court building artwork from a century of controversy and embarrassment. 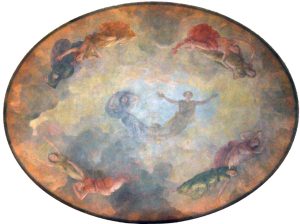 The three large murals also underwent changes from what the Register described. The mural originally envisioned for the Supreme Court ceiling, a 26- by 16-foot rectangle titled “Light of the Law,” was switched to the ceiling of the Appellate Court room. The mural finally installed on the Supreme Court ceiling, meanwhile, is a 20- by 16-foot oval called “Supremacy of the Law.” It features the allegorical figures of Good and Evil surrounded by eight other figures representing concepts like maternal love and life and death. None of that was in Krehbiel’s original plans, at least as the Register described them.

The third large painting is “Law and Equity,” mounted on the west wall of the Appellate Court room. Like the missing gallery, it has racial implications. The mural shows figures representing Law and Justice, surrounded by other figures representing wealth, industry and poverty. The Register described many of the planned figures in the 1908 dedication story.

“A widow sits at the feet of justice,” the newspaper said. “Orphans are near by. The family is in the foreground. Figures of a priest and negro in the background.”

Lizbeth Wilson examined Krehbiel’s paintings in detail in a 1984 article published in the Journal of the Illinois State Historical Society. The design of the appellate wall panel “was executed as Krehbiel first described it, except for one significant change,” she wrote. “The priest is there, but no black man appears in the finished painting.” 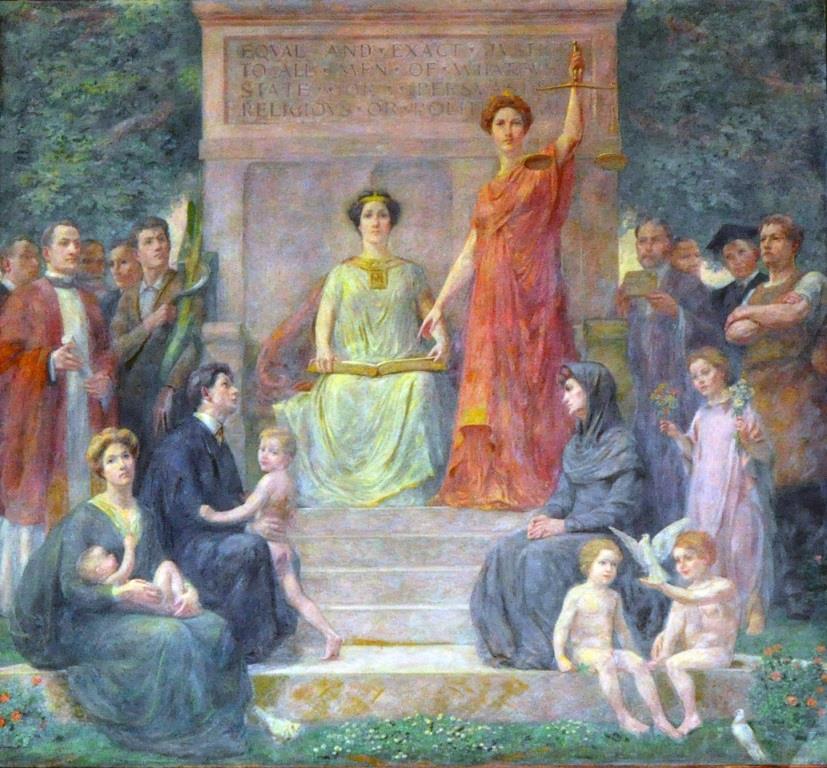 ‘Law and Equity,’ Appellate Court wall. Dulah Krehbiel was the model for the central figure. The face in question is in right background.

Wilson was correct in that none of the characters in the panel is obviously Black. One, however, may have been meant to be. In the painting’s right background, between a bearded man and an educator wearing a gown and mortarboard, is the partial head of a man. With a slightly darker skin tone, the man would have been seen easily as African-American. If that was Krehbiel’s intention, the figure’s positioning, in the background and subordinate to the other figures, also fits the period’s endemic racism. (The Springfield Race Riot took place in 1908, while Krehbiel was in the middle of his mural work.)

Krehbiel himself seems to have been relatively unprejudiced. According to John Lupton, executive director of the Illinois Supreme Court Historic Preservation Commission, one of Krehbiel’s close friends while in art school in Paris was African-American, and Krehbiel discontinued his membership in the Paris-American Art Club because the club wouldn’t allow his friend to join. 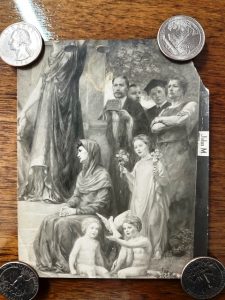 Phone done by Krehbiel shows an early sketch of his planned mural. The background figure is clearer, but its race remains inconclusive. (ISCHPC)

Did Krehbiel intend that face to be African-American? Once again, no one knows the answer. Lizbeth Wilson was among those who wondered about the reasons behind the changed murals:

Between 1908, when Krehbiel made the initial plans for the murals and 1911, when the last canvas was hung in Springfield, the subject matter of the murals had undergone significant change – significant, but not necessarily better or worse. The reasons that motivated the changes are difficult to determine – perhaps the justices held different symbols of the Law as sentimental favorites; perhaps the State Architect felt that the gallery plan did not complement the architectural lines of the room; perhaps the State Art Commission wished a more symmetrical layout for the Appellate Court ceiling mural; perhaps the artist simply reconsidered his plans. For whatever reasons, it is evident that the artist Krehbiel worked closely with the various public commissioners who represented contemporary political philosophy, artistic style, and popular conventions.

“Krehbiel and his artist wife spent several months in research and planning for the execution of each mural,” Rebecca Krehbiel wrote.

They purchased the vacant lot next to their Park Ridge home, moved a barn onto the property and converted the barn into a studio. Much space was needed for the canvases – some as large as twenty-one feet by sixteen feet – and for the equipment needed to hold and move them. Sketchbooks were filled with costume designs. Dulah Krehbiel created Grecian gowns and robes, and then she served as her husband’s model so the drapings would be authentic.

No one in the U.S. could provide canvases the size Krehbiel needed for the large murals, so the couple imported those from France. Krehbiel installed a system of scaffolding and pulleys in the barn so he could hang the canvases while he worked on them. 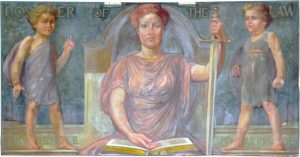 Once the murals were complete, Krehbiel returned to teaching at the Art Institute, at the architectural school of the Armour Institute (today’s Illinois Institute of Technology), and during summers in Saugatuck, Michigan, where he eventually created the AK School of painting.

He also painted almost daily for the rest of his life, often trekking out to scenic areas near Park Ridge to paint landscapes and nature scenes. Bad weather was no impediment, he wrote in 1943.

I remember the times when at 20 degrees below, I could take a dog trot of half a mile and return to my easel feeling like a red hot stove … Nothing like getting into winter weather. …

A painter never seems to grow old. Nature has so many new things to reveal that one dislikes to miss a single day.

Krehbiel died in June 1945, on the day of his retirement from the Art Institute.

“His legacy,” Rebecca Krehbiel wrote, “was to several generations of students, to those who loved the rural scenery of the northern Illinois region, and to those who found inspiration in the murals of the Illinois Supreme Court Building.”

Before the Illinois Supreme Court had its own building, it was housed in the increasingly crowded Statehouse.

State architect W. Carbys Zimmerman designed the structure, which is three stories high. The exterior is buff Bedford stone. The two statues outside the north entrance, “Law and Knowledge” and “Justice and Power,” were done by Chicago sculptor Charles Mulligan.

To see the murals: The Illinois Supreme Court Building is open to the public from 9 a.m. to 5 p.m. Monday through Friday.

More information: This entry is based largely on articles compiled by Madeline Gumble for The Krehbiel Paintings (2010), a pamphlet available from the Illinois Supreme Court Historic Preservation Commission. See also the 18-minute video, “Illinois Supreme Court Special Session to Unveil Historic Artwork by Albert Krehbiel,” from the Illinois Courts office. And SangamonLink’s thanks to preservation commission executive director John Lupton.

It was designed by state architect W. Carbys Zimmerman (1859-1932); the general contractor was V. Jobst and Sons of Peoria.