The statue of Pierre Menard that formerly stood on the Illinois Statehouse grounds was a gift from a citizen of Missouri. Was it a good likeness of Illinois’ first lieutenant governor? Nobody knows.

The Menard statue, along with that of Abraham Lincoln’s rival Stephen A. Douglas, was removed in September 2020. The two monuments were taken down in the wake of reevaluations that concluded both men had abetted slavery and racial injustice.

Menard owned slaves and worked to keep slavery legal in Illinois. His statue also was criticized because it depicted a Native American in a subservient position. Menard profited from trading with the Shawnee, Cherokee and others, although he also was considered a friend of and advocate for the Native Americans of early Illinois.

Douglas’ wife inherited a slave plantation that Douglas managed and profited from, while his personal opinions about slavery, not to mention his political actions, were, at best, ambiguous.

The statues went into storage, and their futures are uncertain.  Here is more about the history of both.

The monument to Menard (1776-1844), who was lieutenant governor from 1818 to 1822, was the first statue ever erected on the Statehouse grounds. It seems to have been the outgrowth of a conversation in 1884 between Elihu Washburne, a former Congressman from Galena and political ally of Lincoln and U.S. Grant, and businessman Charles Pierre Chouteau of St. Louis. 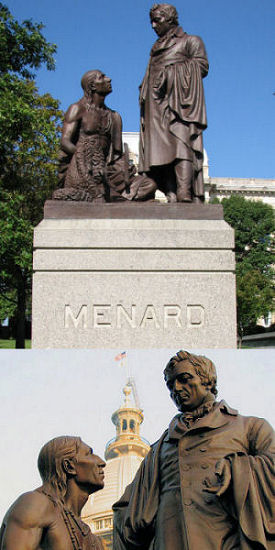 Exactly what prompted Washburne’s interest in Menard is unclear. Here is how the idea came about, according to the Illinois State Journal in 1887.

During a visit of Mr. Chouteau to Hon. Elihu B. Washburne, at Chicago, in 1884, the latter suggested the propriety of Mr. Chouteau’s erecting a monument to Pierre Menard, who was a long-time friend of Mr. Chouteau’s father. Mr. Chouteau consented promptly to devote $10,000 to the purpose if Mr. Washburne would consent to take charge of the details of the work. These conditions were agreed to. …

Washburne and a committee he formed (including Gov. John Hamilton) selected Indiana sculptor John H. Mahoney to create the eight-foot-tall bronze statue. Unveiling the work on the Statehouse lawn, however, wasn’t all smooth sailing.

For starters, no one, including Mahoney, knew what Menard had looked like. The Journal made that point carefully.

As Gov. Menard died in 1844, no general criticism of the likeness in the statue has been indulged in. The features were modeled from a portrait in the possession of his daughter, and probably bear some resemblance to the original, though just how much or how little, is one of the things now very difficult, if not impossible to determine.

Also, in planning the statue, none of the organizers thought to ask the legislature for permission to install it on the Statehouse grounds. Lawmakers belatedly agreed to that in 1885.

The statue was put in position in May 1886, but officials decided not to display it until it was formally dedicated, so the statue was hidden by a wooden enclosure for more than a year. The plan was for Washburne to do the honors. (If he had, perhaps today we would understand his fondness for Menard.) However, family illnesses delayed the dedication, and then Washburne himself became sick.  He died in October 1887.

At Chouteau’s request, the enclosure was removed after Washburne’s death, and the dedication finally took place in January 1888. With Washburne gone and Chouteau unable to attend, however, it became a second-rate affair, part of the annual meeting of the Illinois State Bar Association.

The featured speaker was Judge Henry Baker of Alton. Baker acknowledged that the reason he got the nod was that he had grown up in Kaskaskia, where Menard lived, and as a boy had known Menard and his family.  He spent much of his speech recalling the wonders of old Kaskaskia, Illinois’s first capital, and lamenting its abandonment. “(T)he very earth upon with she stood has become a desert and a desolation,” Baker said. “Night and ignorance have wrapped themselves around her, and she rests alone in the memories of the past.”

Menard’s statue originally stood in the northeast quadrant of the Statehouse grounds. It was moved in 1918 to accommodate, coincidentally, the then-new statue of Douglas.

The statue of Stephen A. Douglas was linked to that of Lincoln in both its conception and its dedication.  Lawmakers authorized creation of the two statues within hours of each other in 1913, in anticipation of the 1918 celebration of the centennial of Illinois statehood. Both were dedicated on the same day, Oct. 5, 1918 – the Douglas monument at 11 a.m. and the Lincoln statue that afternoon. 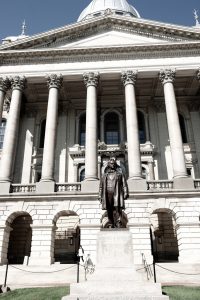 While Lincoln obviously took priority, officials at the time saw both men as lions of Illinois politics prior to the Civil War. Politics and timing also played roles in the decision to erect a Douglas statue. The legislative sponsor of the appropriation to build the statue, Sen. Campbell Hearn of Quincy, was a Democrat like Douglas (Lincoln, of course, had been a Republican).

And Douglas’ reputation in the General Assembly was at a high point exactly when plans for the statue were approved. Douglas was born on April 23, 1813. On April 24, 1913, lawmakers celebrated the centenary of his birth with speeches and tributes all afternoon and evening. And on April 25, they approved construction of the two statues, both by unanimous votes.

“If we except Abraham Lincoln,” editorialized the Illinois State Register (Springfield’s Democratic newspaper), “Stephen A. Douglas was the greatest statesman Illinois ever produced.”

A state art commission chose Charles Mulligan of Chicago to sculpt Douglas’ image, but Mulligan died before he could do so. Gilbert Riswold, also of Chicago, who had been the commission’s second choice, was the eventual sculptor. The statue cost the state $25,000.

At the statue’s dedication in 1918, speakers focused on Douglas’ support of Lincoln after the Civil War began. The Register reported Gov. Frank Lowden’s speech at the Douglas statue:

Today is indeed a historic one. We are closing the doors of our first century and opening those of our second, and it is exceedingly appropriate that on this day we dedicate two statues in memory of the two men, who, political rivals for more than a century, always remained friends, and who in the last years of their lives became united in one patriotic passion for the preservation of their country.

And whoever speaks the name of Lincoln must always think of his great political antagonist, Stephen A. Douglas. We should teach our children that when they have visited the monument to Lincoln’s memory in Springfield … he should turn from that and visit the tomb of Stephen A. Douglas and read above his dust his last words: “Tell my children to obey the laws and uphold the Constitution.” (Applause.)

As was typical of the time, there was no mention of Douglas’ record on racial issues.

The Douglas statue stayed in its original spot northeast of the Capitol until 1935, when it was moved to a more prominent spot next to the east entrance of the Statehouse. Again, politics was the motivation.

“When Democrats came into power,” the Journal reported, “several of the party leaders agreed that Douglas, whose statue was partially hidden by shrubbery, should have a more commanding position. Governor (Henry) Horner, Secretary of State (Edward) Hughes, Chief Justice Norman L. Jones of the state supreme court, and others picked out the new location.”