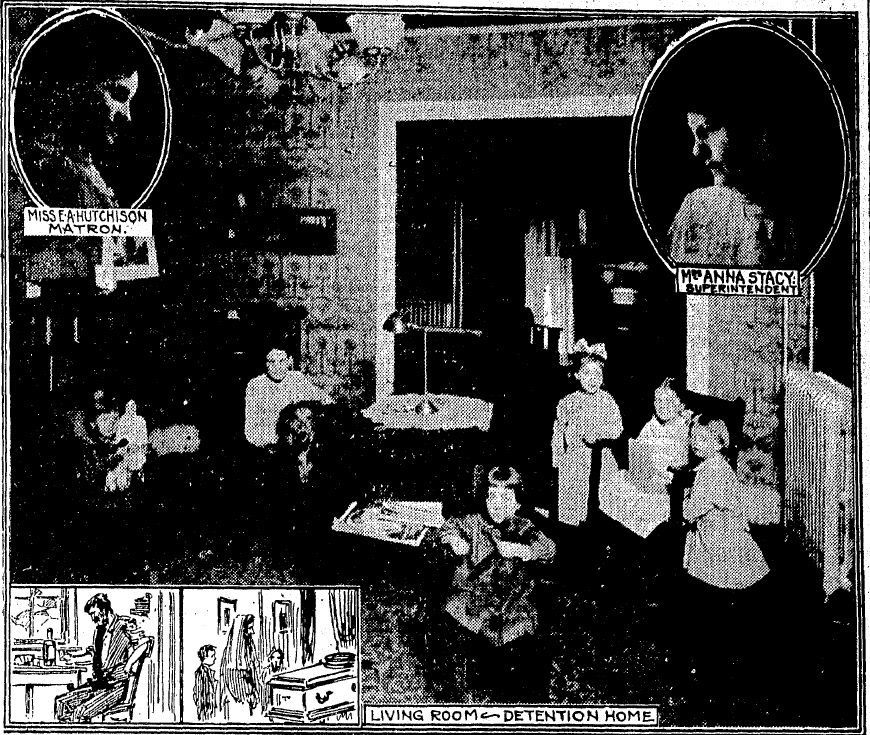 The Sangamon County Detention Home was created with two goals: to be both an alternative to jail for the county’s youngest delinquents and a refuge for neglected or abandoned children. It wasn’t a perfect solution to either problem, but it probably was better than anyone had a right to expect.

That’s certainly the impression Illinois State Register reporter Hazel Bloom received in February 1916, a few months after the home moved to 512 N. Seventh St., its location for the next 50 years.

“The Detention Home … belies its name,” she wrote.

If you are a resident of Springfield visit the home that the Sangamon County board of supervisors has provided for dependent and delinquent children of the county. If you are a visitor passing through the city, it would be one of the happiest tours that could be found. Such a visit will broaden the vision and stimulate a tolerance for charity. …

Stepping upon the great wide porch that sweeps the west and south side of the house, the visitor will see mischievous faces peeping from behind the curtains. Little hands tap at the windows. Almost before the knocker is dropped the door opens. A smiling woman whose eyes shine with kindness as well as wisdom and experience opens the door and asks you in.

“Take off your things while you are here,” she says. She is the superintendent, Mrs. Anna Stacy.

One instinctively feels that hers is not an “at home” tone. …

That is exactly as it looks, a happy home with a good mother. You might fool grown folks, but you can’t fool children.

Nineteen children were living at the detention home when Bloom visited, including six who were too young to go to school. Bloom didn’t describe the circumstances that sent any of the children to the home, but other Register stories, unsurprisingly, suggest the reasons revolved around misery, poverty and petty crime. Young residents of the home in 1916 included:

Some neighbors had gone to court to try to block the home’s relocation to Seventh Street, but Bloom wrote that those objections “are no longer heard.”

“The good behavior of the house full of children has aroused the admiration of all those who live near the home,” the story said. “Instead of a riotous, window-breaking aggregation, the children are quiet and pleasant mannered. Many people have ben astonished to learn that the big house near the corner is a Detention Home.” 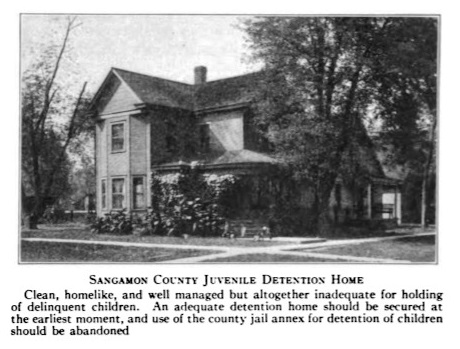 Before the detention home was established, Sangamon County had no system for dealing with dependent or delinquent children. Sangamon County Judge J.B. Weaver spoke to the county board about the need for a home in June 1911, according to the Register.

The judge gave many instances of where children were incarcerated in the county jail because the court had no other place in which to place them while their cases were being investigated. He also gave instances of where children were turned loose entirely with no supervision other than that of the probation officer, whose duties are numerous. He explained beyond a doubt (the) drastic need for a detention home, and asks the assistance of the board in securing such an institution.

The first county detention home was in a rented seven-room house at 12th Street and Enos Avenue. It could accommodate only 12 children, but it apparently worked well enough for dependent children. The superintendent and her assistant “seemed to be making the best of present facilities and providing as good care for the children sent to them as possible,” the 1914 Springfield Survey said. “At the time of our visit the place was clean and homelike, and the children were neat and apparently happy.” 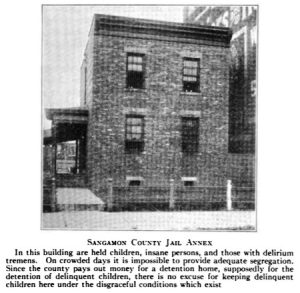 The home was often full, however, so most children suspected of crimes were housed in the Sangamon County Jail annex. Conditions there, the Survey found, were “unbelievably bad.”

The annex, “to all intents and purposes part of” the jail, was a two-story brick building with barred windows and locked doors, the Survey said.

On each floor are three rooms. … There are no toilets in the rooms and when persons are locked in them buckets serve the purposes. The walls and floor are bare. The windows on the occasion of two visits were extremely dirty. The only doors between the rooms are of bars and persons confined in one room can readily see into other rooms on the same floor. Children are provided with no amusement facilities. Viewed as a whole the building has all the appearance of an ordinary jail, being bare, cold and unattractive.

The Survey’s report prompted the county board to look for a larger building.

Committee chairman George Hippard first recommended the home move to the former site of “Madam Brownie’s” famous bordello at Eighth and Jefferson streets,  which had been made available by the July 1915 death of Augusta “Madam Brownie” Kellogg. That met immediate public objections. Hippard backed down, but, in an open letter to Register readers, explained the obstacles his committee faced.

Our search has been discouraging in the extreme. Houses of sufficient size are very difficult to obtain for the rental we can afford to pay. People in the more exclusive portions of the city strenuously object to the home being located in their neighborhood (or) say that they do not care for their children to come into contact with such children as the home is likely to contain. Others looking upon the children as criminals … object to their property being used for such purposes. …

The location of the (Kellogg) property is not all that may be desired, but so far it is the best site available, and if any citizen or local organization knows of a more suitable place that can be had we would be glad to have them communicate with the committee at once. It is our desire to avoid criticism as much as possible and therefore we are only too glad to listen to suggestions from any source.

Hippard’s committee then negotiated the rental (later purchase) of the house at 512 N. Seventh from lawyer Lloyd Hamilton. The Register reported the deal.

The big residence property contains fourteen rooms and will accommodate thirty-five children. It will be occupied Nov. 1.

The building is in fine repair and is thoroughly modern. It is well adapted for the use to which it will be put, and its occupation will be a decided step forward in the care of juvenile offenders who ought not to be confined in the county jail annex.

The detention home remained on North Seventh, under different names and with changes in the composition of its youthful residents, until 1966.

In 2021, the home’s former site was part of the St. John’s Hospital complex. Sangamon County’s Juvenile Detention Services facility was in the 2200 block of South Dirksen Parkway; dependent children were generally the responsibility of the Illinois Department of Children and Family Services.