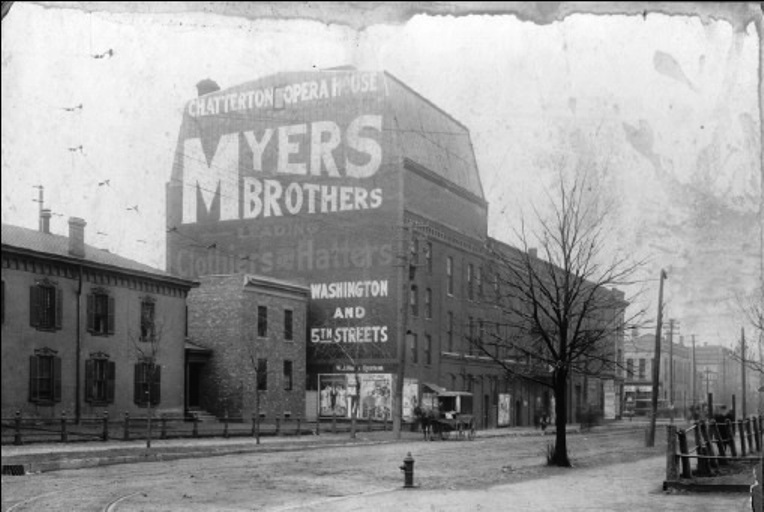 There was no audience inside when the roof of the Chatterton Opera House collapsed on Aug. 9, 1887.

“The blue sky is now the only covering that shelters the auditorium of the once beautiful interior,” the Illinois State Journal reported.

The crash was entirely unexpected, no one ever having suspected there was any danger of the structure falling down. It looked strong and stout, but the pretty ceiling is now a mass of debris, and the seats that have been graced by the beautiful costumes of so many pretty Springfield ladies are now all broken and bent.

The building was on the southeast corner of Sixth and Jefferson streets, the former site of the Rudolph Opera House. Rudolph died in 1868, and Jacob Bunn took over the theater. The opera house burned to the ground in 1876. Bunn had a commercial building constructed, but a financial crisis forced him to sell it in 1878 to George Chatterton. Chatterton decided to bring a theater back to the corner and had Bunn’s building extensively remodeled.

That work apparently created the conditions that resulted in the collapse. According to the Illinois State Register:

George W. Chatterton (in 1879) remodeled the whole building, lowering it from the second story to the ground floor, excavating a cellar, putting in the balconies and adding twenty feet to the building at the east end, which is the part occupied by the stage and dressing rooms. The interior finishings of the house were very handsome, and the Opera House is considered one of the finest in the west.

The roof of the original building was left intact when the house was remodeled, one or two additional trusses being put in to strengthen it, and the roof was extended so as to cover the new addition.

Chatterton actually built two extensions, one on the east end – the rear – to provide room for the opera house’s stage and the other at the west end, where the box office was located.

The wooden trusses supported a heavy tar-paper-and-gravel roof, the newspapers said. A long spell of hot weather apparently dried out the trusses to the point that three center trusses snapped in two, bringing down the roof. The stage and box office were protected by the extension roofs, but the center area, where audiences sat, was destroyed.

No performances were scheduled that day anyway, and observers had noticed that the roof had started to sag several hours earlier. As a result, only a half-dozen people were in the theater the afternoon of Aug. 9, all of them employees and contractors studying the problem. They escaped to the undamaged sections at each end.

The timing was lucky, the Journal said.

A common remark on the street in the afternoon when two people met was: “Ain’t you glad the opera house roof didn’t fall Saturday night.” There was a minstrel show there that evening and a large audience was in the hall. The mortality would have been terrific had the roof fallen when an audience was present.

“The gradual manner in which the fall took place and the time at which it occurred were both happy circmstances,” the Register agreed.

George Chatterton, who was in New York on a yachting trip when the collapse happened, promised the opera house would be quickly rebuilt, bigger and better than ever, and it was. The Register described the new décor when the Chatterton reopened Sept. 28, less than two months after the disaster.

The entire interior of the building has been tastefully repainted and regilded and elegant new carpets have been laid throughout. New seats have been provided for the lower portion of the house, the opera chairs in the pit being of the latest and most comfortable pattern. New chandeliers and other arrangements afford greatly improved lighting facilities. Beautiful silk velvet now covers the railings below, and it presents a charming appearance as one ascends the stairs. The wood work of the private boxes has all been elegantly regilded and repainted, silver-plated railings now encircling the boxes.

The ceiling also was raised six feet. Not surprisingly, however, Chatterton went out of his way to emphasize the solid construction of the new roof, which featured “Hoover trusses” used for railroad bridges.

“The architect, W.W. Boyington of Chicago,” the Register said, “confidently states that a twenty-ton locomotive with a train could now glide over the Opera house roof without endangering the lives of the audience below.”

Hat tip: To reader Victor Holstein for bringing the Chatterton roof collapse to our attention.

This entry was posted in Amusements, Architecture, Arts and letters, Buildings, Disasters, Theaters. Bookmark the permalink.