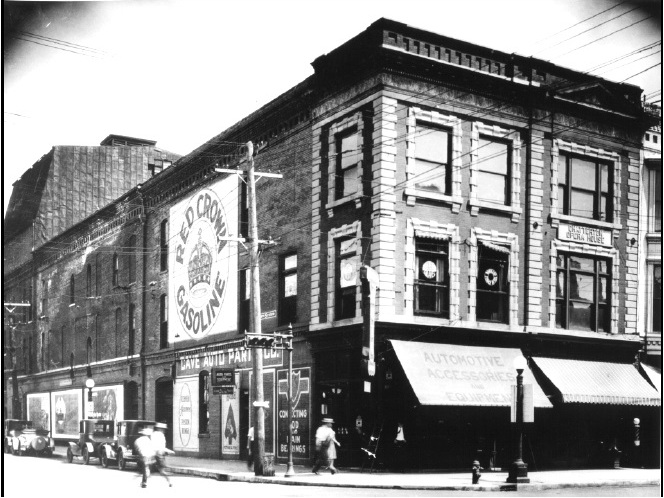 Two views of the Chatterton Opera House in the early 20th century. Above, Sixth Street view. Below, from Seventh Street, showing scale of east end of the opera house; from left are the Sangamon County Jail, jail annex, opera house. (Sangamon Valley Collection) 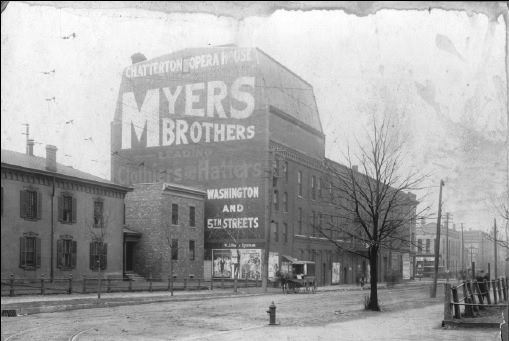 The Chatterton Opera House at the southeast corner of Sixth and Jefferson streets was for nearly a half-century Springfield’s principal venue for stage entertainments of all kinds, and a major stop for national touring companies, recitalists, and speakers.

The theater was opened as the Rudolph Opera House by brewery owner Robert Rudolph in 1866, but when Rudolph died in 1868, his heirs were unable to pay his debts to banker Jacob Bunn Sr., and Bunn took over the opera house.

“The Opera House continued as heretofore, providing a haven for local Thespians and harboring such professionals as dared the hazards of the road in the increasingly hard times of the ’70s,” George W. “Gib” Bunn Jr. wrote in The Old Chatterton: A Brief History of a Famous Old Opera House, published in the Journal of the Illinois State Historical Society, March 1943.

However, on March 17, 1876, Rudolph’s was almost completely destroyed by fire. “There is a story that Mr. Bunn, upon being awakened with the news that the Opera house was burning down, remarked that he couldn’t put it out, and turned over and went to sleep again,” Gib Bunn wrote.

The opera house was rebuilt, but Bunn in turn lost it when his private bank failed in 1878. That gave George W. Chatterton Sr. (1822-88), the proprietor of a jewelry and variety store on the west side of the courthouse square, the opportunity to buy the Rudolph. The elder Chatterton turned over management of the opera house to his son, George Jr. (1853-1915).

The Chattertons commissioned a New York City architect to transform the house into what he boasted would be “the finest theatre in the middle-west.” The newly refurbished Chatterton Opera House had its grand opening on Sept. 10, 1879. While the building was surrounded by saloons, and its ground floor occupied by shops (including, in its later years, an auto parts dealer) the theater itself was a place of “gilt and red plush and enormous chandelier,” Gib Bunn wrote. The opening night program was printed on silk.

The Chatterton Opera House (also known as the Chatterton Theatre or simply Chatterton’s) opened as the American theater entered its heyday. It attracted able and promising actors and gave their productions painstaking rehearsal and attention to detail. The railroads made it possible for big-city shows to visit the nation’s small towns. Springfield, located on a rail line midway between Chicago and St. Louis, was a convenient stop for these touring companies, and locals got to see the best of them.

Most of their names are forgotten, but even a casual student of theater might recognize performers such as Joe Jefferson, James O’Neill (father of the playwright Eugene), Lilly Langtry, Lillian Russell, Thomas W. Keene, William Gillette and the young Ethel Barrymore.

To keep its seats filled, the management catered to all tastes, from slide-illustrated lectures to performing ponies, prize fights, hypnotists, magic shows, burlesque revues (“20 Beautiful Amazons led by Miss Minnie Palmer”), and minstrel shows. The stage also found room for operatic recitals and John Philip Sousa’s band. The Yale Glee Club serenaded Springfield with “For God, For Country, and For Yale” — “the classic example of anticlimax,” wrote Bunn, a Princeton man himself.

In 1912 a New York theatrical producer, upon learning that his companion was from Springfield, said, “Ah, the old Chatterton! Those horrible dressing-rooms! But Springfield is the finest one-night stand in the country.”

Locals with greasepaint in their blood also took the stage, including such local business luminaries as John W. Black, Jacob Bunn Jr., and C.H. Lanphier Jr., as well as women of the Second Presbyterian Church, who presented tableaux vivants.

The Chatterton eventually became a victim of the rising costs of mounting quality road shows. It also was a victim of rising expectations among audiences excited by motion pictures. As Gib Bunn noted of the World War I years, “You could see Theda Bara at the Majestic (a rival theater, which presented movies as well as vaudeville) for one-twentieth of what it cost to see Valeska Surratt at the Chatterton.”

The house closed on May 13, 1924, with a performance of “Sancho Panza” starring Otis Skinner. The building was condemned as unsafe, the street facade partially torn down, and the rear demolished for a parking lot. The Chatterton eventually was replaced by the grand Orpheum Theatre.