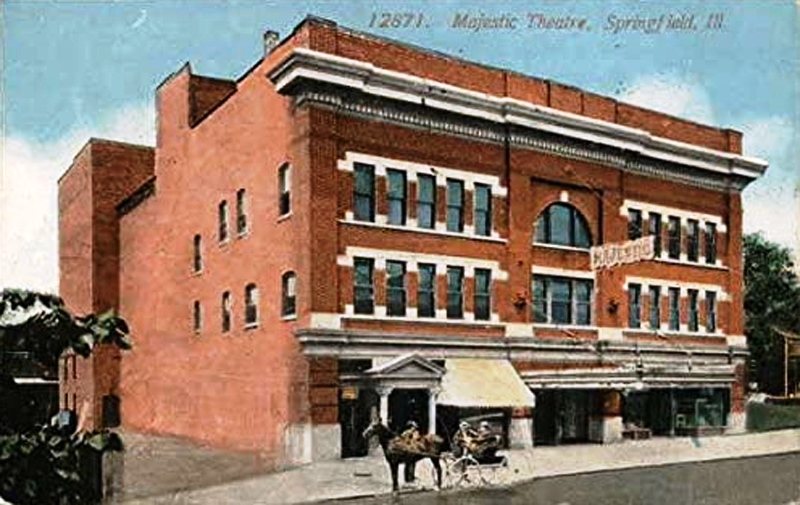 The Majestic in an undated postcard image (eBay)

“Springfield society assembled en masse on the evening of May 23, 1907, when the Majestic Theatre opened its doors for the first time”, the Illinois State Register reported in 1935.

By then, the Majestic, 415-21 S. Fifth St., was no longer in operation. It had been converted to the Roxy, a sleek Art Deco-style movie palace.

The Majestic was built in 1906 specifically for live performances. Its opening program was the Lew Fields production, “About Town”, a show that previously ran at the McVickers Theater in Chicago. Included in its Springfield cast were known stage names like Blanche Ring (she later sang a popular rendition of “In the Good Old Summertime”), Louise Dresser (who played Al Jolson’s mother in “Mammy”), and Lew Fields himself. 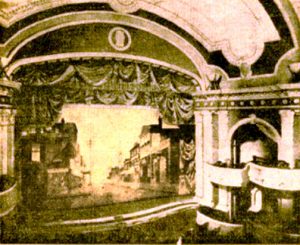 Gov. Charles Deneen, Mr. and Mrs. Charles Hickox and other local dignitaries attended the Majestic’s grand opening. When built, the theater was lauded as “an outstanding addition to the legitimate playhouses of Springfield.”

The task of building the Majestic belonged to Harris Construction of Ohio, which built other Midwestern theaters as well. Construction began in May 1906. The Majestic’s architect was Arland W. Johnson (1871-1957) of Ohio, who was known primarily as a theatrical architect. At the time he was working on his Springfield project, Johnson also was designing another Majestic theater in Peoria.

The Register in July 1906 described some of Johnson’s design plans for Springfield’s Majestic:

It will be one of the handsomest structures in the city. The front of the building will be unique in that it will be constructed of pressed brick in black and white. The black bricks will be alternated about the cornice and windows in a pleasing contrast and the effect will be at once novel and beautiful.

Entrance is gained through a splendid vestibule, twenty feet in width, with marble walls and tile flooring. An equally beautiful foyer fourteen feet in width will supply room for promenade purposes. From each side of this foyer, stairways will lead up to the balcony. These stairways will be constructed of stained mahogany in the most elaborate and beautiful designs. … There will be no woodwork used in the main auditorium of the theater which will be 108 feet deep by seventy feet wide with a seating capacity of over 1,500 people. In the auditorium, the proscenium arch will be (made) of stucco over brick … with steel trusses minus supporting columns, an uninterrupted view of the stage (is) thus being afforded from every seat on the floor.

The Majestic was decorated in an ivory and gold color scheme that had elements of green. The lobby was dominated by “deep forest green” embellished with elaborate gilt. Lights surrounded a 40- by 80-foot stage. The Majestic also was outfitted with an all-electric system in an era when gas lighting was still popular.

Along with the theater, the Majestic’s building accommodated meeting rooms for the local Elks lodge (No. 158) on the second and third floors. (When the lodge celebrated its grand opening, “cigars were distributed generously,” newspapers reported.)

At the time, the Majestic and the Chatterton Opera House were the two largest performance houses in the city. The Chatterton also was the Majestic’s main competitor in terms of popular attractions. 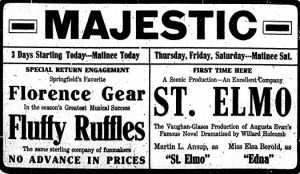 However, the Majestic effectively was the largest theater in Springfield, at least in terms of its useable square footage. When extra seating was added on the main floor, the Majestic held several hundred more patrons than the Chatterton’s capacity of about 1,400.

Springfield jeweler and real estate developer John C. Pierik (1859-1920) was one of the main financiers behind the Majestic. His brother-in-law, Cornelius Giblin (1856-1914), a clothing merchant, was the other partner. (Giblin reportedly owned the site where the Majestic was built.)

During the period he co-owned the theater, Pierik served on the board of directors of Ridgely National Bank and on the board of the Springfield Park District. Later, he was among Sangamon County citizens who helped create the Illinois State Museum and Illinois Historical Library in Springfield.

Pierik and Giblin signed the National Amusement Company to lease the Majestic’s performance space for ten years. National Amusement was under the direction of Alexander Dingwall, Frank Burt and George Nicolai, prominent East Coast theater managers. In turn, National Amusement contracted E.D. Stair & Havlan, a booking agency, to bring in talent. Because National Amusement had leases at multiple theaters across the nation, this enabled Springfield patrons of the Majestic to see “high-grade attractions at all times, with a top price of 75 cents a seat outside of the boxes,” newspapers said.

Formal theatre performances gave way to informal American vaudeville. Vaudeville was typified by unrelated acts playing back-to-back on stage to form a single bill. The combinations were endless. A famous opera singer might perform after a not-so-famous juggling act, while a regional stand-up comic could follow a hometown one-act drama. Blackface skits, acrobatic pieces, immigrant parodies and fast banter were typical of vaudeville, which was a popular U.S. art form before the movie era. According to the Register’s 1935 story about the Majestic, Jack Benny, Will Rogers, Harry Houdini and “hundreds of other famous stars” performed there.

Films became a big draw at theatrical houses around the world during the 1910s, and the addition of sound in the late 1920s boosted the popularity of movies even further. The Majestic began showing movies year-round in the ‘20s, although the theater still occasionally booked stage performers into the early 1930s.

In 1934, the Frisina Amusement Company bought the Majestic. Frisina gutted and overhauled the theater, transforming it from a performance venue into a movie house. Conversion work was completed by early 1935, which is when the Majestic was given its new name, the Roxy. It continued to operate under that name until 1978.

More information on both the Majestic and the Roxy: See SangamonLink’s entry on the Roxy.