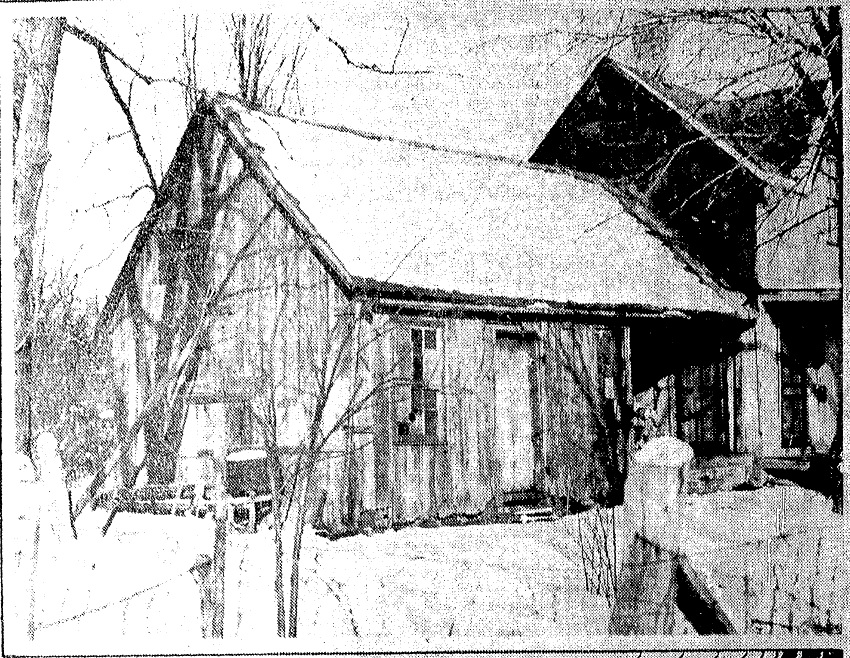 Remains of the William Herndon home in winter 1938, when the building was being used as a tool shed. (A similar photo and others taken in 1925 can be viewed here.) Courtesy State Journal-Register

The property where William Herndon compiled much of his biography of Abraham Lincoln never became a state park, but part of the house where Herndon worked still overlooks the Sangamon River north of Springfield.

Herndon (1818-91) was Lincoln’s third and last law partner. He largely gave up his law practice after Lincoln’s death and moved to a 583-acre farm he had inherited from his father, Archer Herndon. He called the farm Fairview because of the view it offered of the Sangamon River valley. Herndon, however, was already in debt, and his decision to go into farming was badly timed.

“His inexperience at farming and the (post-Civil War) economic depression led to still more financial problems for Herndon,” Gary Lee Erickson wrote in an article for the Journal of the Illinois State Historical Society in 1974. “By the end of 1873, Herndon retained only about 80 of the inherited 583.82 acres of Fairview.

“Despite the hardships and reverses he suffered after 1865,” Erickson wrote, “Herndon never gave up his search for Lincoln material.” Jesse Weik, a student from Indiana, first contacted Herndon in 1875, and by 1885 the two decided to co-write a Lincoln biography, which eventually became Herndon’s Lincoln: The True Story of a Great Life. 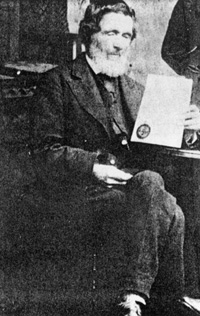 The book and notes Herndon made of his interviews with his informants make up much of what scholars today know about Lincoln’s pre-presidential life. With the exception of a month of concentrated work with Weik in Greencastle, Ind., most of Herndon’s work on the biography was done at Fairview. “Herndon continued to correspond about the book with Weik, and each time Herndon wrote it was necessary to make the six-mile walk into town to the post office,” Erickson wrote.

Herndon’s Lincoln turned out not to be the financial windfall the authors had hoped for, partly because, as Erickson noted, “their manuscript contained Herndon’s controversial observations about Lincoln’s religion, family life, and his alleged romance with Ann Rutledge.”

Herndon’s reputation as a historian has fallen and risen again as later scholars have examined and re-examined his work. Douglas L. Wilson wrote a persuasive defense of Herndon’s honesty and accuracy for the Journal of the Abraham Lincoln Association in 1993. His conclusion:

It is evident that the Herndon who worried about the accuracy of his first glimpse of Abraham Lincoln is a virtual stranger to contemporary students and deserves to be much better known; that the rectitude and good faith of his informants generally has been unfairly discounted and deserves to be reconsidered; and that, as a consequence, the extensive body of material that Herndon collected and preserved is far more valuable than has been realized and deserves to be treated accordingly.

Herndon died at Fairview on March 18, 1891, a few hours after the death, also at Fairview, of his son Willie. Both were victims of influenza.

Leonard Trainer, who lived with and worked for the Herndons, bought what remained of Fairview in 1894 and 1895. As of 2020, the property, about 40 acres by then, remained in the Trainor family (Leonard Trainer’s son George changed the spelling). Leonard Trainer’s great-grandaughter, Jill Loeser, and her husband Mike lived at the farm, and Loeser and her sister, Jean Miller, discussed Fairview and her family’s history with it in an oral history interview done in 2019. The property is off Illinois 29 north of Springfield, between the Sangamon River bridge and Jeffries Road.

The original Herndon home eventually fell into disrepair. Erickson reports, for instance, that the bedroom-study where William Herndon died was used as a summer kitchen, a meat-processing room and finally as a wood and tool shed. George Trainor added to the house in 1911; a 1960 fire destroyed part of the home, but the structure was remodeled and rebuilt. Although some of the original home was demolished over the years, Loeser and Miller said a section of the home William Herndon knew – updated and modernized – remained part of the existing house in 2020.

Springfield lawyer John P. Snigg (1887-1952) tried to persuade the state of Illinois to convert the property into a state park in the late 1930s. Snigg spoke frequently about Herndon and about Fairview’s historic significance, and he periodically escorted Lincoln buffs on tours of the site. “While others were sanctifying Lincoln,” Snigg told Springfield Rotarians in 1938, “William H. Herndon, after the president’s assassination, proceeded to make a human being of him.”

At one point, Snigg claimed that Gov. Henry Horner supported the state-park effort, but no legislation ever resulted.

Herndon and Fairview, however, are memorialized in Poem No. 203 of Edgar Lee Masters’ Spoon River Anthology. It is titled “William H. Herndon”:

THERE by the window in the old house
Perched on the bluff, overlooking miles of valley,
My days of labor closed, sitting out life’s decline,
Day by day did I look in my memory,
As one who gazes in an enchantress’ crystal globe,
And I saw the figures of the past,
As if in a pageant glassed by a shining dream,
Move through the incredible sphere of time.
And I saw a man arise from the soil like a fabled giant
And throw himself over a deathless destiny,
Master of great armies, head of the republic,
Bringing together into a dithyramb of recreative song
The epic hopes of a people;
At the same time Vulcan of sovereign fires,
Where imperishable shields and swords were beaten out
From spirits tempered in heaven.
Look in the crystal! See how he hastens on
To the place where his path comes up to the path
Of a child of Plutarch and Shakespeare.
O Lincoln, actor indeed, playing well your part,
And Booth, who strode in a mimic play within the play,
Often and often I saw you,
As the cawing crows winged their way to the wood
Over my house-top at solemn sunsets,
There by my window,
Alone.

Herndon tomb: William H. Herndon originally was buried in an unmarked grave. The monument that now stands in Oak Ridge Cemetery was dedicated on May 30, 1918. Among those in attendance were three of Herndon’s daughters and poet Vachel Lindsay. Willie’s gravestone is next to that of his father. A roadside sign next to the cemetery’s Block 14 points to the Herndon plot.