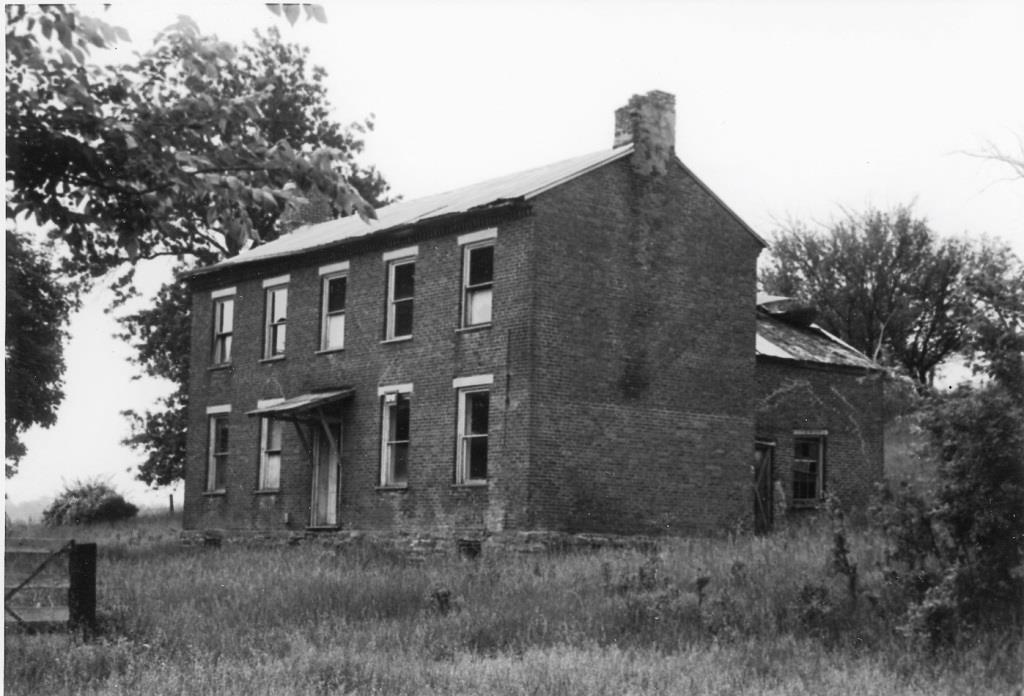 “Pensacola” was the name given to a tiny, unincorporated community in Cotton Hill Township, southeast of Springfield, in the 1800s. The area is designated for inundation if and when Hunter Lake is ever created as a backup water source for the city of Springfield. The property has been owned by City Water, Light and Power for decades.

The only building still on the site is the shell of a brick home constructed in the 1830s by David Beam, a Black Hawk War veteran who became a miller, farmer and justice of the peace at Pensacola.

Beam’s property once was on the road between Springfield and Edinburg, leading to speculation that, in its early years, the building also served as an inn or even a stagecoach stop, and Pensacola folklore has become a minor issue in the arguments over whether to build Hunter Lake. That, in turn, has led to confusion about Pensacola’s real history.

In a 2011 brochure, one lake opponent, the Prairie Rivers Network, extrapolated and then confused what is known about Pensacola into statements that the Beam building was “an important stagecoach stop during Lincoln’s time,” that Lincoln “undoubtedly stopped there,” and that Stephen Douglas gave a presidential campaign speech there in 1860. (Update: In 2019, the Prairie Rivers Network removed the brochure from its website. In a letter to the Sangamon County Historical Society, a Prairie Rivers spokesman wrote, “We express our sincere appreciation for the Society’s diligent efforts … to separate fact from fiction.”)

It may well be true that Lincoln visited the Beam family at Pensacola – as a politician and lawyer, he traveled widely throughout Sangamon County (although the Beams were committed Democrats). However, only oral tradition supports the contention that Beam’s home served as an inn, and the statement about Douglas’ speech is simply incorrect.

Whether or not he hosted travelers at his home, David Beam (1805-53) was a prosperous and influential figure in his neighborhood. Beam immigrated to Illinois from Ohio in 1828 and married one of his Illinois neighbors, Rosanna Ebey (1813-60).

As a justice of the peace, Beam frequently officiated weddings, according to newspaper records. He also was active in the Democratic Party, serving as a Cotton Hill delegate to regional Democratic conventions in 1839 and 1843.

The census, however, lists Beam only as a miller and farmer, as does John Carroll Power’s 1876 History of the Early Settlers of Sangamon County, Illinois. Nothing mentions him serving as an innkeeper. Beam’s one-line obituary in the March 3, 1853, Illinois State Journal calls him simply an “old and respected citizen.”

None of that rules out the possibility that the Beams took in travelers, but neither does it support the idea that the Beam home was an important waypoint. And none of the stagecoach routes advertising in Springfield newspapers in the 1830s and 1840s appear to have used routes that would have taken them near Pensacola. (The usual route from Vandalia, for instance, went through Macoupin County, not toward the Taylorville area, as would presumably been the case if Pensacola was on a stagecoach itinerary.) The Beam home was large for the time, but one should keep in mind that David and Rosanna Beam had 11 children, six of whom grew to adulthood.

Politically, Pensacola remained a Democratic stronghold after David Beam’s death. In particular, the party held a rally there in support of Stephen A. Douglas’ presidential candidacy in September 1860 – but that event today seems only to have added to confusion about the history of Pensacola and the Beam homeplace.

Dr. Emmet Pearson of Springfield, who preserved the Clayville Stagecoach Stop near Pleasant Plains in the 1970s, visited the remains of Pensacola in 1989 and wrote a three-page summary of his conclusions. In the summary, which is on file in the Sangamon Valley Collection at Lincoln Library, Pearson accepts, without giving any evidence, Pensacola’s supposed role as a stagecoach stop. He also misinterprets the one mention of the 1860 rally to be found in the Springfield newspapers.

A purportedly sleepy little village which ostensibly came alive only when the stagecoach came through on its regular run to Vandalia, Pensacola gained notoriety one fine autumn day in 1860 as the locale for a “grand jubilee and poleraising.” As reported in the Illinois State Journal, September 10, 1860, Pensacola was the place chosen for a “Rump Democracy” of the Democratic Party – probably as a result of its rather vociferous support of Stephen A. Douglas when he was running for President against Abraham Lincoln.

This report … was signed by “H,” and probably was written either by the editor himself or an enthusiastic Douglas supporter. …

In fact, once the reader realizes the Journal was the local Republican Party organ, it’s obvious that “H” intended to satirize the Democrats’ gathering at Pensacola, not endorse it. The writer goes on to say that speakers at the event were Rev. Daniel Fetter and William Veatch, who “H” praises sarcastically as leaving “Clay, Webster, Patrick Henry, Demosthenes, and Cicero … entirely in the shade.” He concludes:

Next in order came whiskey, swearing, bartering on card playing, horse racing and last but not least, came fighting. Brother Democrat versus Democrat stood in battle array. We are sorry we did not have a reporter to take down those master speeches.

Note that neither the Journal nor Pearson claims that Douglas himself spoke at the Pensacola event, as the Prairie Rivers Network’s now revoked brochure stated.

Historico, the newsletter of the Sangamon County Historical Society, examined Pensacola in 2003. Among the documents the unidentified writer viewed was an abstract that showed David Beam bought the home site in 1834. Like Pearson, Historico accepted, without presenting any supporting evidence, the idea that the Beam home was a stagecoach stop:

The abstract shows a small map of “Beam’s Mill Lot” showing the mill, bridge over Horse Creek and the house. The road from Springfield to Edinburg crossed the bridge over Horse Creek and curved by the house. The area was known as Pensacola, though no actual village was ever platted. The house was said to have served as a hotel, which would suggest that this was actually a stagecoach inn.

However, Historico held out little hope that Pensacola and the Beam building could be saved, concluding, “In its present quiet solitude, (Pensacola) is a nostalgic reminder of a past day.”

The Democratic rally of September 1860

Here is the full transcript of the Illinois State Journal’s derisive account of the Democratic Party gathering at Pensacola on Sept. 10, 1860. (Note that this report was published in the Sept. 12, 1860, Illinois State Journal, not Sept. 10, as the Pearson report stated. The Journal story was datelined Sept. 10, which probably accounts for Pearson’s misstatement.)

“Editors Journal: — On Saturday last, the “Rump” Democracy of this vicinity had a grand jubilee and pole raising in Pensacola, a village famous for its supporters of “my great principle”. In regard to the location, allow me to say that a more appropriate place for a Democratic pole could not have been selected. Pensacola is truly suggestive and admirably adapted to Democratic taste. All who are acquainted with this portion of our county are, we presume, aware that this is a place where “my great principle” has been retailed and imbibed—where vice and immoral conduct of almost every species has been extensively carried on—hence we have called it an appropriate rallying point for the “rumps”. This pole raising event has been in contemplation for more than a month, but never until last Saturday, have they been able to realize their design, owing, perhaps, to not having a sufficient supply of the “critter” (editor: meaning whiskey) on hand.

Speeches were made by the Rt. Rev. Daniel Fetters and his Excellency, the Hon. William H. Veatch. The speaking, of course, coming as it did from such able and worthy sources, was full of pathetic appeals in favor of the “big” jug. Clay, Webster, Patrick Henry, Demosthenes, and Cicero were thrown entirely in the shade. Such were the brilliant sallies of their superior wit that even Mac’s eagle was left far behind. Next in order came whiskey, swearing, bartering on card playing, horse racing and last but not least, came fighting. Brother Democrat versus Democrat stood in battle array. We are sorry we did not have a reporter to take down those master speeches.

In conclusion, we would say to the orators we think they will do to accompany Stephen in the next search for his mother.” H.