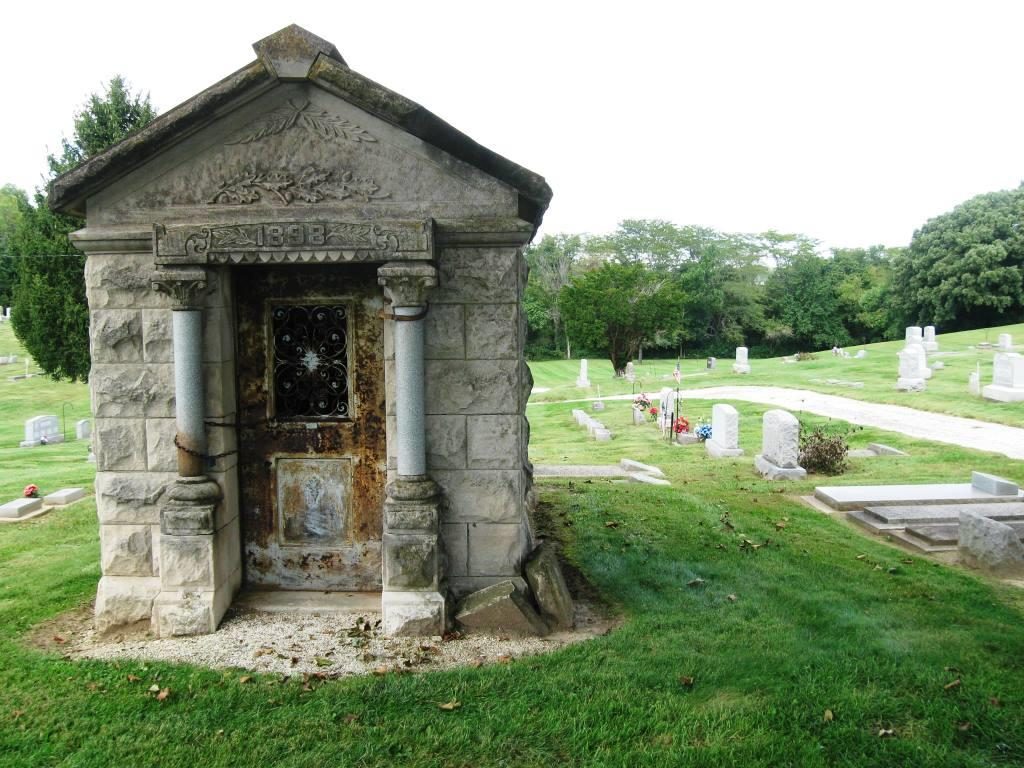 A small stone building, perhaps originally a receiving vault, stands near the entrance of Sulphur Springs Cemetery. The sloping vale to the north may have been created by the spring (which no longer exists). The “wigwam tree” would have been somewhere in the distance. (SCHS photo)

Note: This entry has been edited to reflect additional information about the first burial at Sulphur Spring Cemetery.

The “wigwam tree” was a hollow sycamore near Loami that, according to John Carroll Power in History of the Early Settlers of Sangamon County (1876), was once measured at 18 feet in diameter.

Power wrote that the tree stood “a few yards north of the Sulphur Springs, South of Loami.”

A.E. Meacham took a ten foot rail, held it in a horizontal position against his waist, and turned entirely around inside the tree. It was about eighteen feet in diameter outside, and was long used as a wigwam by the Indians. The entrance was at the east side. It was safe when there were only Indians in the country, but some vandal, claiming to be civilized, set fire to it and burned it down.

“We have some among our oldest citizens that remember the tree, and say that they hid in tree while playing in that vicinity,” according to a note apparently written by Van Graham of Loami in 1938. 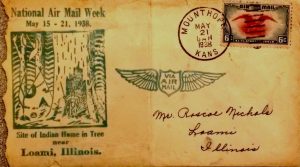 The week of May 15-21, 1938, was designated “National Air Mail Week,” and communities large and small throughout the U.S. were given the chance to design their own commemorative postmark. Loami’s cancellation, at Graham’s prompting, was a drawing of the tree, captioned “Site of Indian Home in Tree near Loami, Illinois.”

The nearby sulfur spring also was the source of some Loami lore, according to Power’s description.

The Sulphur Spring spoken of above, bubbles up at the foot of a hill near Lick creek, and in its natural state, when animals approached it to drink the water was a quagmire, but the early settlers made an excavation, eight or nine feet deep, and walled it up, so that the water flows out over the top of the wall, clear and pure. Soon after it was thus improved two old topers, on a very hot day, visited the spring, taking with them a jug of whisky, intending to have a good time laying in the shade near by, drinking their whisky, and, for variety taking an occasional sip at the sulphur water. One of them undertook to cool the whisky by holding the jug in the water, and while doing so let it slip from his grasp. To cut a forked limb from a tree and make a hook of it would be too much work. In order to rescue the jug, the one who let it slip consented that the other should take him by the heels and let him down head foremost. The whisky was secured in that way, at the imminent risk of drowning one or both of the men. It must have been liberally watered or it would not have sunk.

“The Sulphur Spring near Loami was known to the Indians, and was very early a camping ground for the whites,” Power wrote.

Power also noted that the cemetery grew around the first burial site of a person of European descent. Power didn’t name the man, but he apparently was William Hewitt, a U.S. Ranger killed by Native Americans during the War of 1812. Details are here.

The burial site, Power wrote, “was known to the very earliest settlers as the grave of the Indian Ranger, and was the nucleus of the present Sulphur Springs Cemetery.”