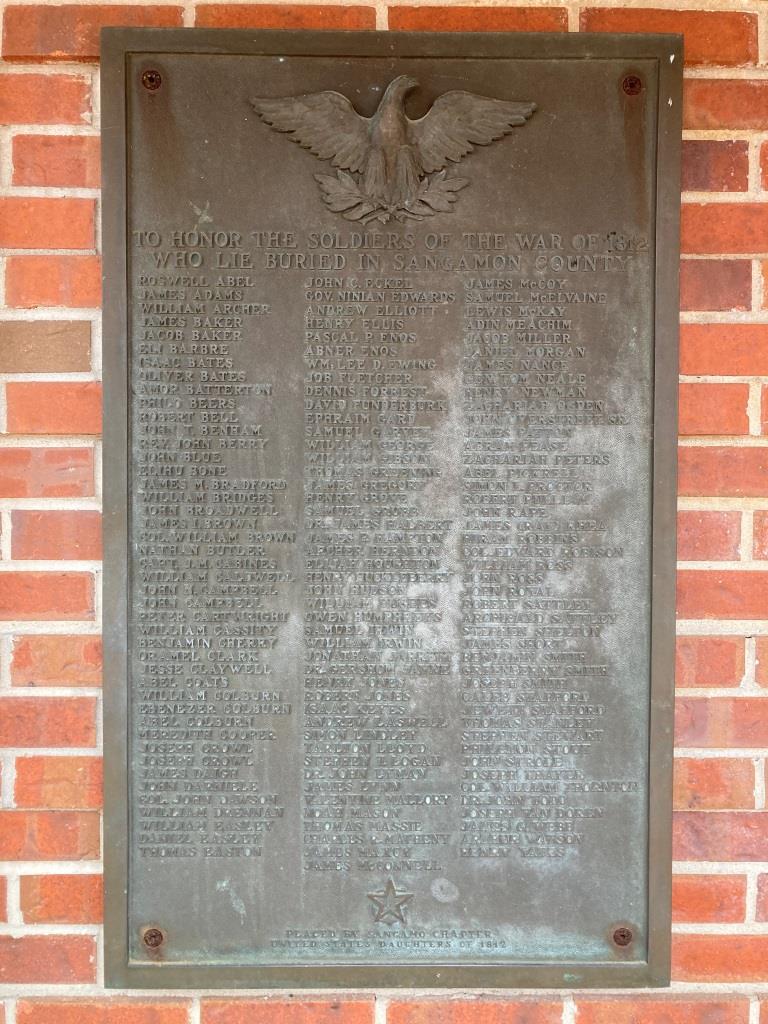 A plaque on the Old Capitol Plaza memorializes veterans of the War of 1812 buried in Sangamon County. (SCHS)

The first European to die in Sangamon County apparently was a U.S. Ranger enlisted to help protect early European settlers from Native Americans during the War of 1812.

The man, probably named William Hewitt, was shot in an unprovoked scuffle with a group of Potawatomi in or near northern Logan County. He lived for a time after being wounded, but died on Nov. 16, 1814 and is thought to have been buried at what now is Sulphur Springs Cemetery near Loami.

The most accessible account of the incident is in the 2012 book Illinois in the War of 1812 by Gillum Ferguson. Rangers, according to Ferguson, were “a federal force halfway between regulars and volunteers. Unlike the militia, they could be kept on duty or on call for an extended period, because they would be paid enough to prevent hardship.”

Authorities formed four companies of Rangers – a company had 68 men – in Illinois. “Rangers were usually stationed at or near the frontier, but would range widely over the area beyond the settlements,” Ferguson writes.

Hewitt was a private in a company commanded by Capt. James Moore. The unit was detailed in November 1814 to escort a herd of cattle from Fort Russell, north of present-day Edwardsville, to Fort Clark, on the Illinois River in today’s downtown Peoria.

The unit was in what today is northern Logan County, near what was known as Kickapoo Town, when the advance party of Rangers encountered about 10 Potawatomi (including some women and children) led by a warrior named Matatah. The Indians were friendly – in fact, Ferguson reports, they were “hunting meat for the garrison at Fort Clark.”

As Hewitt got down from his horse to approach Matatah, a woman standing nearby began to run away. Ferguson writes:

Matatah remained where he was, clapping his hands on his breast and saying “Potawatomi” and “Gomo” (the name of a chief friendly to the Europeans). He then threw his gun on the ground. Hewitt picked it up, and turned back toward his horse, but other Rangers rushed from behind Moore and shot the Indian. The wounded Indian sprang at Hewitt, tore the gun from his hands, and fired, mortally wounding Hewitt, before he himself collapsed and died.

The main body of Rangers disarmed the rest of the Indians. But when they learned Hewitt had been shot, the Rangers fired at their prisoners, killing three men, a 13- or 14-year-old boy, and a woman, according to Ferguson.

When the slaughter was over, a surviving Native American woman told the Rangers they were surrounded by hostile Kickapoo, and the Rangers fled back to Fort Russell. “During a disastrous night march across the prairies,” Ferguson writes, “the soldiers were drenched with rain, Hewitt died of his wounds, and nineteen cattle became separated from the herd.”

The contention that Hewitt was buried at the sulfur spring near Loami is based on longstanding tradition. In footnotes, Ferguson cites a story told more than 60 years later by Elizabeth Lindley Harbour (1803-90), whose family was among early settlers in Sangamon County.

Harbour gave two statements about the Ranger’s burial, both reported in History of Sangamon County, Illinois, Together with Sketches of Its Cities, Villages and Townships (1881). Her memory was secondhand, however. Not only was Harbour only 11 years old at the time, her family was still living in Bond County (there were no European settlers in Sangamon County until 1817).

The History’s first reference is a short summary of Harbour’s talk to the Old Settlers of Sangamon County in 1877. About the burial, it says: “Mrs. Harbour also remembers the Indian ranger who died and was buried, September 1813, at Sulphur Springs cemetery. His name was William Hewitt.”

There are two errors in that summary. For starters, the Ranger died in 1814, not 1813. In addition, the History says “William Hewitt” was the name of both the dead Ranger and the commander of Hill’s Fort near Greenville, which Indians had attacked a couple of months earlier.

Harbour’s family lived near Hill’s Fort, and she apparently had firsthand knowledge of that fight. According to Ferguson, the Ranger commander at Hill’s Fort was Ensign John Journey, who died in an ambush near the fort. In the version of her talk published in the History, Harbour does identify one of the soldiers killed at Hill’s Fort as John Journey. It’s not clear whether the mistakes associated with Harbour’s talk originated with her or with the anonymous writer of the History.

In the second statement, a memoir provided specifically for the 1881 History, however, Harbour made the following admission.

I forgot to mention about the ranger who was wounded on what is now supposed to be Spring creek, and was brought to Sulphur Spring on Lick creek, where he died and was buried, at what is now Sulphur Spring cemetery, he being the first man buried there. I am nearly seventy-six years old, and have a very sick daughter at present; my mind being flustrated (sic) I cannot say near as much as I could otherwise.

A shakier story about the burial of a Ranger at the later site of Sulphur Springs Cemetery comes from a pamphlet, The Cemeteries of Loami and Maxwell Townships, published in 2003 by the (now disbanded) Sangamon County Genealogical Society.

That publication, however, differs in important details from Ferguson’s footnoted and relatively authoritative story about the fight in which Hewitt was killed. Not only does the SCGS give the Ranger’s last name as Hughes rather than Hewitt, the society reports a different date and location for the fight in which he was wounded. Here is what the genealogical society said:

The first one buried there (Sulphur Springs Cemetery) was a U.S. Ranger by the name of William M. Hughes. According to Government records, a company of Rangers had followed a band of Indians, overtaking them near what is now Galena, Illinois. Hughes was badly injured and an attempt was made to get back to the South with him. Arriving in Sangamon County, as it was then known, they made camp near a large sulphur spring on the South side of Lick creek. There Hughes died and according to records he was buried on a beautiful hill to the Southwest of the spring. On his marker, erected by the U.S. Government, is inscribed information showing that he was a veteran of the War of 1812. Records also show that he died Sept. 7, 1813.

According to the earlier settlers there was a log structure of some sort erected over the grave to keep out wild animals of the day, that might dig into the body. Many years passed, and the curiosity of some led them to dig into the spot to see if there had been a body interred there. It was established beyond a doubt that this was the authentic grave spoken of in the Government records, as the buttons of the coat and other evidence was found.

As the early settlers came and death overcame them, the beauty of the hills gave them the desire to be buried by the side of the Ranger. The other burials, grouped around the first grave with few exceptions followed no family plan, but was more a matter of place for them to be buried as they came. So it can be said, “the Saint and the Sinner sleep side by side.”

The September 1813 date may well derive from the erroneous report printed in the 1881 History, although it’s not clear where the other details originated. Ferguson reports no battles near Galena in 1813 or any other year (although “near Galena” possibly could encompass southern Wisconsin too). And Illinois in the War of 1812 has only a single sentence about a Ranger named Hughes. That Ranger – no first name given – actually was from Indiana. He was killed by friendly fire in Wayne County (southeastern Illinois) in March 1815. 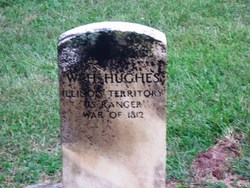 Notwithstanding the shaky nature of the “William Hughes” identification, two local markers give the name of the dead Ranger as Hughes. One is a gravestone in Sulphur Springs Cemetery, which obviously was erected long after the burial. Presumably, it sits approximately where local folklore says Hewitt/Hughes was buried.

The other is a plaque prepared by the Sangamo Chapter, United States Daughters of 1812, in 1932. The bronze tablet originally was installed at the former Sangamon County Courthouse (today’s Old Capitol State Historic Site). When the courthouse was rebuilt as the Old Capitol in the 1960s, the plaque was moved to the elevator kiosk on the south side of the Old Capitol Plaza. It includes the names of 133 veterans of the War of 1812 buried in Sangamon County; “William Hughes” is listed in the middle of the second row.

Hat tip: Our thanks to SangamonLink commenter Sam Henderson for alerting us to Gillum Ferguson’s book, the recollections of Elizabeth Lindley Harbour, and the genealogical society entry.

Note: This entry replaces an earlier, far less complete one with a similar title.