Robert Pulliam (1776-1838) is usually credited with building the first cabin in Sangamon County and therefore being the county’s first European settler. Historical markers near the site of his first cabin (below) and in downtown Springfield identify him as the county’s earliest European resident, as did the county’s Old Settlers Society in 1859 and John Mack Faragher in his 1986 history, Sugar Creek: Life on the Illinois Prairie. 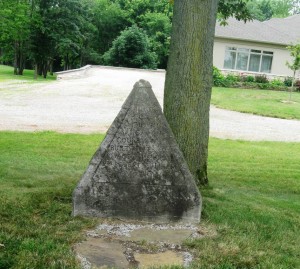 In October of 1817, Robert Pulliam left his wife and children in southern Illlinois and, accompanied by four men and one woman, led his string of cattle north into unsettled country. Moving at a grazer’s pace, Pulliam’s party spent at least ten days covering the hundred miles to Sugar Creek, and arrived there after autumn had set the prairie and timber ablaze with color. The herd grazed on the rich grass flourishing in the prairie meadows, while, a mile into the creek’s timber in the midst of a large grove of sugar maple, the party built a rude log shelter to protect them from the winter. … Then, as spring approached, Pulliam set his men to work tapping the maples, rendering the sweet sap into sugar over the fire in the cabin. In April 1818, the party headed south, with fat stock, furs, and several hundred pounds of maple sugar to trade. …

“Pulliam was just another hunter and sugar-maker attracted to the abundance of the San-gam-ma. But his occupation of the sugar grove marked a turning point in the history of Sugar Creek.”

Pulliam’s claim to being the first settler, however, is not undisputed. The 1881 History of Sangamon County, Illinois reports that two other men — William Nelson and, especially, Henry Funderburk – may  have moved into Cotton Hill Township in southeastern Sangamon County in the spring of 1817.

“The date of their arrival is a matter of dispute, which does not seem to admit of settlement,” the 1881 volume says.

Whether he was the county’s first resident or not, research done by David Brady and William Furry for a 2005 presentation to the Sangamon County Historical Society determined that Robert Pulliam was “at best … an uncommon criminal.”

Brady and Furry found court records that show Pulliam was accused (and several times convicted) of such crimes as theft, counterfeiting, perjury, assault and battery, harboring slaves, “keeping a disorderly house,” and even attempted rape. “In all likelihood,” Brady and Furry wrote, “his move to the Sangamo Country in 1817 was an effort to stay a step ahead of the law and his creditors.”

Robert Pulliam, they concluded, “was not a hero for his time or any other. May he rest in peace.”

The Brady/Furry paper, with more details of Pulliam’s checkered career, is available as a reprint, “Hero or Hellion?” from the Sangamon County Historical Society.