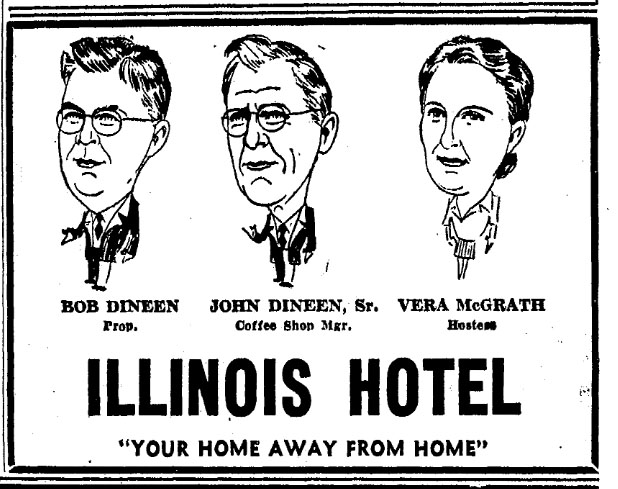 When Robert Dineen died in 1970, his obituary stated he had been an owner of the Palmer Hotel and the Illinois Hotel in downtown Springfield. Although not mentioned in the obituary, he also was the past president and a founding member of the Springfield Hotel Association and had managed the hotel that formerly was part of the Elks Club.

Bob Dineen (1899-1970), in fact, was a member of a family that had been part of Springfield’s hospitality industry since the first years of the 20th century.

A Dineen family geneaology reports that Bob’s father, John Joseph Dineen (1870-1957), emigrated from County Limerick, Ireland, and married Mary “Minnie” Woods (1875-1968), another Limerick native, in 1898 in Chicago. The couple moved to Springfield in 1902 so John Joseph could take the position of “steward” (assistant manager) of the St. Nicholas Hotel. As a result, Bob and his siblings grew up in the hotel business.

Bob’s younger brother Thomas (1907-75) was also a Springfield hotelier. He briefly worked at the Palmer and in 1932 bought the financially strapped Silas Hotel, 411 N. Fourth St.

Another brother, James, worked in the hotel business for a short time, but later became an electrical contractor.  Joseph Dineen entered the priesthood, and John Patrick worked for Pillsbury Mills in Peoria.  Lawrence, the youngest sibling, served as a desk clerk at the Illinois Hotel with Bob.  One sister, Alice, married and moved to Missouri, while the other, Mary, became a nun. 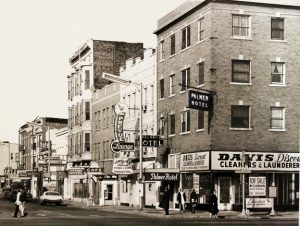 Bob Dineen first worked at Illini Country Club and then the St. Nicholas Hotel in Springfield, but took a job at the LaSalle Hotel in Chicago in the early 1920s. He met his future wife, Ella Sheehan, there. After their marriage in 1927, the couple returned to Springfield to open the Palmer Hotel at 429 E. Jefferson St. (the northwest corner of Fifth and Jefferson streets).

The building was owned by John Oberman, a Russian immigrant who probably brought Dineen aboard due to his experience at the St. Nicholas.  A 1926 Illinois State Journal article on the Palmer’s construction said Dineen named the hotel in honor of Illinois Governor John M. Palmer.

The Palmer consisted of 36 rooms, “one-half with bath and (all) with hot and cold running water and telephone.” The newspaper described the hotel as “completely fire proof” and decorated in an “Italian grey” color scheme.   Room rates were $1.25 nightly without a private bath and $2 with a connected bathroom.

While the Palmer was small compared to some hotels built in Springfield during the 1920s, the Journal described it as a jewel among the “three leading hotels” along Jefferson Street. (The others were the St. Nicholas on the southeast corner of Fourth and Jefferson and the Empire Hotel at 424 E. Jefferson.)

The grandest hotel built in Springfield during the 1920s was the $1.25 million Hotel Abraham Lincoln, which boasted a grand ballroom, crystal chandeliers and marble floors –  trimmings the hotels on Jefferson Street could not afford.

Bob Dineen sold his interest in the Palmer Hotel to Samuel Seideman sometime in 1937. Brothers John and Patrick Carrico took over hotel operations in the mid-1940s, although the Oberman family continued to own the building itself. 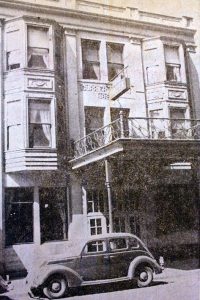 In the late 1890s, the United States was coming out of a financial depression, and Springfield businessmen George Kern and Silas Currier decided the time was right to build a hotel at 113 N. Fourth St., between Jefferson and Washington Streets. Their 56-room establishment was called the Hotel Silas in honor of Currier. Amenities included a restaurant and barbershop, per descriptions in the Illinois State Register on opening day, Nov. 13, 1897.

The Silas was owned by Hugh Stine in the early 1930s, but he was forced to file for bankruptcy . Thomas Dineen bought the hotel at auction in February 1932. He put money into its rehabilitation, and by mid-June, the Silas was open for business.

Shortly after the opening, Dineen wed Mary Collins. Following a short honeymoon, the couple returned to live at the Hotel Silas, where they raised their family. 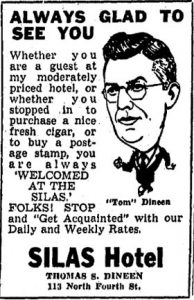 In 1937, an Illinois State Journal feature praised Thomas Dineen for his “excellent service to patrons.” The hotel was described as having a “homey atmosphere and low rates.” The article added that the place attracted “regular residents [with its] weekly or monthly rates.” Those rates were from $1 to $2 a day.

Thomas Dineen sold the Silas in 1943, after 12½ years at its helm.  He went on to serve as an assistant manager of the AAA Chicago Motor Club of Springfield and later in life his family moved to Ashland.

In 1932, Bob Dineen and a group of investors formed D&D Hotel Operating Co. to buy and provide management for the Grand Hotel, 109-11 N. Seventh St., and the Illinois Hotel at the northeast corner of Fourth and Washington Streets.

D&D Hotel Operating Co. operated the Grand Hotel for only a short period before it, like the Palmer, was sold to the Carrico brothers. The Dineens instead concentrated on the Illinois Hotel, which had been built in 1904-05 on the former site of the Chenery House, where Abraham Lincoln lived immediately before leaving Springfield to be inaugurated president. 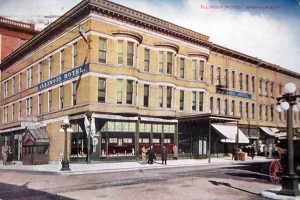 Postcard shows the Illinois Hotel in 1914

The Illinois Hotel was designed with 105 rooms. Its suites had private bathrooms, a luxury in an era when many hotels put shared baths on the guest floors. When the Dineen family assumed management in the 1930s, brothers Bob, James and Lawrence worked together in operating the venture.  The hotel was a success for over a decade.

In 1947, the Illinois Hotel experienced an extensive lobby renovation, but the update was never fully enjoyed by patrons before the hotel was sold to local developer William Gingold. Gingold transformed the building into offices and “modern new stores,” as reported in the Illinois State Journal on October 23, 1947.

The hotel’s coffee shop closed Oct. 27, and its remaining furnishings were auctioned off in December. By February 1948, Gingold’s company was issuing leases for the 15,000-square-foot property, which was renamed the Gingold Building.

In 1948, Raymond Hose, a co-owner of the Abraham Lincoln Hotel, renovated storefronts along 416-24 E. Monroe St. and retrofitted a section of the block to build a 50-room hotel.  According to an Illinois State Journal-Register account, Bob Dineen gave Hose permission to call his hotel the New Illinois. The New Illinois Hotel was explicitly designed for “transients and permanent guests”, a sign of things to come in downtown Springfield.

In 1958, the St. Nicholas Hotel bought the Silas Hotel, across Fourth Street, and demolished it to expand the St. Nick’s parking facilities. According to an Illinois State Journal article, the Silas had become “primarily a rooming house with three-fourths of the guests renting by the week.”

Springfield’s westward development, starting in the 1960s, brought financial hardship to all of the small-scale hotels and many independent businesses that relied on downtown foot traffic.

Both the Grand and Palmer hotels turned into transient homes, and both gained reputations for drug dealing, violence and vagrancy.  In the mid-1970s, the Palmer also contained a massage parlor (the Cloud Nine) that was repeatedly mentioned in newspaper articles about prostitution in the city.  City officials ordered the Palmer vacated in January 1979. 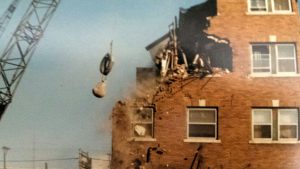 By autumn 1980, East Jefferson Street was one of the last vestiges of Springfield’s once-flourishing “Levee” vice district. That era came to an end in November, when the north side of East Jefferson Street and the entire 200 block of North Fifth Street were razed to make way for Near North Village, a 6,000-square-foot commercial and residential development.  The Palmer Hotel and all of the old taverns on the block tumbled down under the weight of a wrecking ball.

Two large hotels – originally named the Forum 30 and the Ramada Renaissance – were  built on opposite sides of the 700 block of East Adams Street in the 1970s and 1980s, and  Lincoln Square, a commercial/residential development with 92 apartments, was constructed in the mid-1980s. By the early 2000s, a series of small-scale residential conversions suggested interest in downtown living was continuing to grow.

No doubt the Dineen brothers would be gratified.

This entry was posted in Business, Hotels & taverns, Prominent figures. Bookmark the permalink.