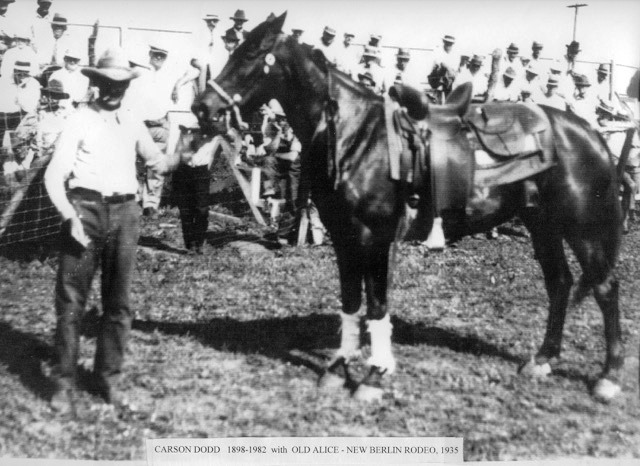 The Stapleton Rodeo drew thousands of spectators weekly to an arena west of New Berlin from 1927 until the eve of World War II.

Competitors ranged from local cowboys to some of the top nationwide riders. The rodeo’s impresario was Edward P. Stapleton (1896-1975), New Berlin Ford dealer and farmer, who boasted that he bought stock from Oklahoma’s nationally famed 101 Ranch (and which he later sold at auctions held on the rodeo grounds).

The Illinois State Journal, which co-sponsored a two-day benefit rodeo at Stapleton Rodeo Park over Labor Day weekend 1937, wrote before the event:

It’s doubtful if any event in this section has enjoyed the prolonged popularity of this rodeo. For nine years and more, the cowboys have been battling broncs and steers before big crowds that have traveled from all parts of the middlewest. …

A rodeo, last holdover of the old wild and wooly west, must be seen to be appreciated. Stapleton’s Sunday rodeo programs have stood the test of nine years because he has furnished real range horses and showed them in a wildwest atmosphere with real, bona fide rodeo riders.

Stapleton probably drew his largest crowd ever that weekend. The Journal’s sponsorship and associated publicity – the benefit was held to raise money for a gymnasium at St. James Trade School – led an estimated 6,000 fans to pack the rodeo park.

“That Sunday turnout is still the talk of central Illinois,” the Journal reported at the end of the year. “The show started at 2:30 p.m., but at 10 a.m. they’d started driving into the enclosure and an hour before starting time they were parked double from the grounds to the hard road, thence clear to the city of New Berlin.”

Area residents who made regular appearances at the rodeo, held on Sunday afternoons during the summer, included Harold Cox (1913-78) of Chatham, a bulldogger on the national rodeo circuit for 30 years. In the off season, Cox raised quarterhorses at his father’s farm near Chatham.

Another Stapleton Rodeo fixture was “pickup rider” Carson Dodd (1893-1982) of Loami, who made a name for himself during a championship rodeo at Soldier Field in Chicago in 1940. “Dodd gave the fans a real thrill last Sunday afternoon,” the Journal said, “when, with an enraged steer running wild through the stands, he roped the animal from his horse and then dragged it to the arena.” Dodd later managed Illinois State Fair horse shows for 28 years.

Stapleton Rodeo Park actually began as the Stapleton Baseball Park in 1926. The next year, however, as New Berlin 1865-1965, the village’s centennial history, put it, “the Wild West was brought to New Berlin.”

E.P. Stapleton went all out to make his Rodeo known throughout the state. He purchased a “Calliophone,” which was operated by John Stapleton, who traveled as far as Quincy, Alton, Decatur, Peoria and Pekin …

The Rodeo Horses were purchased at the St. Louis market and shipped to New Berlin from the Western Ranges of Montana. A white mule from the 101 Ranch, owned by the Buck Jones Circus, was purchased by Mr. Stapleton for use in variety acts during the Rodeo. Also, there was a black mule, “Little Anxious,” who had a bad habit of biting and dropping anyone who attempted to ride.

The Arena cowboys were Carson Dodd (and) Norvell Bergschneider, with James Stapleton on a pony. Announcing the program was Russel Roesch. These cowboys worked the Arena at all rodeos. At the chutes you would find Simon Burge, former 101 Ranch hand with Beech Ruble and Henry Suter assisting. The comedy was supplied by the clown, Cliff Baker. 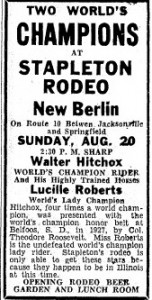 Stapleton also built a tavern – the Rodeo Tavern – and gymnasium on the site in 1928. The gym “was used for both High School and professional Basket Ball games,” according to the centennial history, as well as wrestling and boxing matches. “After all games, there was roller skating with the calliophone (a form of calliope) furnishing the music,” the history said.

Stapleton had other marketing tricks as well, according to the history.

In 1930 and for five years to follow, as an added feature to the Rodeo, Mr. Stapleton hired an Ascension Balloon owned by Summer Cole of Springfield, with Hoot Gibson of Waverly making the ascensions in the smoke-filled balloon. On other occasions, Hoot Gibson bailed out of an airplane, landing as near the arena as possible

In the early morning hours on Sunday, November 14, 1937, a fire, believed to have started from the furnace, engulfed the building. Thus, this chapter of the story of the west end recreation park came to an end.

Harry Winkley, 22, formerly of Springfield, who had been sleeping on the second floor of the Rodeo Tavern, burned to death in the fire.

The former site of Stapleton Rodeo Park housed a tavern, The Still, on Old Route 54 on the western edge of town in 1916; the remainder of the property was a cornfield.

Hat tip: Thanks to Gene Dodd for bringing the Stapleton Rodeo to our attention.

This entry was posted in Amusements, Media, Prominent figures, Sports and recreation. Bookmark the permalink.