The Ursuline order of Catholic nuns played an important role in educating Springfield’s young from the mid-1800s through most of the 20th century, founding Ursuline Academy, a high school originally for girls only and Springfield Junior College, for decades Springfield’s only post-secondary educational institution.

With the opening of new opportunities for women in the past half-century and the resulting decline in Catholic religious vocations, however, few Ursulines continue to work and worship in Springfield. 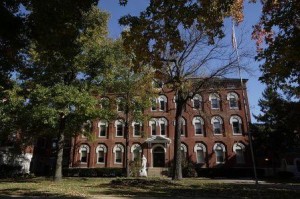 The Springfield Ursulines  are an outgrowth of the Company of St. Ursula, which was founded in Brescia, Italy in 1535 by St. Angela Merici and spread throughout Europe. In 1857, Bishop Henry Juncker asked for nuns  to work and teach in Springfield, and Mother Mary Joseph Woulfe and several other Ursulines responded to the invitation.

Within the next 10 years, attendance at the academy increased, and the sisters purchased property in the 1400 block of North Fifth Street. They moved into the new convent and academy in September 1867. In 1875, the Ursulines opened St. Joseph Grade School just south of the convent and academy.

Mother Mary Joseph died on October 29, 1890. Soon after her death, a building spree began at the convent and Ursuline Academy: the chapel in 1894, with wood carvings done by the nuns themselves; convent space in 1901; and shortly after, St. Ursula’s Hall.

The Ursulines established Springfield Junior College in 1929. Although Catholic, the college was designed from the beginning to serve the entire community, according to a college history written by Pete Ellertsen in the 2000s.

“Classes were to be small, and they were to encourage ‘the prime factor in all education worthy of the name: close contact between student and instructor,'” the history says.

The 1957 centennial celebration of the Ursulines in Springfield was a big civic event as well as a religious one. That year, the Ursulines were educating 3,700 children and adults in the city. In the following years, a new building was completed for Ursuline Academy, and dorm space, known as “the Village,” was constructed for Springfield Junior College. Mueth Hall and Hanlon Hall were added to the convent building, and the habits worn by the sisters were modified to more contemporary styles.

As vocations dwindled, however, both the Ursulines and the schools they founded changed. In June 2005, the Ursuline Sisters moved from the large, historic convent to smaller living units in Springfield.  Ursuline Academy, meanwhile, had become co-ed in the 1980s, but continued to struggle with finances and enrollment. The school closed in 2007, its 150th year.

Springfield Junior College, which had been renamed Springfield College in Illinois in 1968, affiliated with Benedictine University of Lisle, Ill., in 2003 and gradually began offering four-year degree programs. The Ursulines bowed out of all involvement with the college.

The change initially appeared to be a success, and the Springfield campus,  including the former Ursuline Academy facilities, was merged into Benedictine University at Springfield in 2009.

In October 2014, however, without warning, Benedictine announced the planned shutdown of all its undergraduate programs in Springfield. The former SCI campus was closed permanently and put up for sale in 2018.

Source: A group of four Ursuline sisters made a presentation to the Sangamon County Historical Society in 2006, a presentation that provided much of the background for this article. Here is how they ended that presentation:

Today, the Ursuline Sisters of Springfield stand on the threshold of a new chapter of their journey. Under the inspiration of St. Angela, and with the determined courage of Mother Mary Joseph Woulfe, who heard the call “to evangelize the prairie,” they move forward into a new setting, with a new vision to minister to God’s people in this city of Springfield in Illinois.