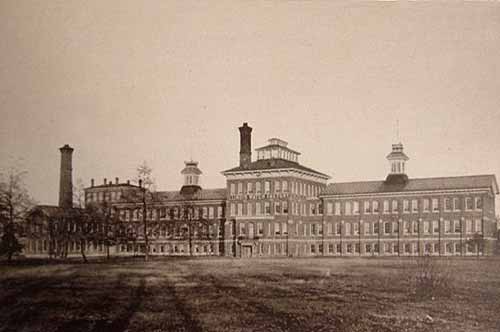 For a half-century, Springfield’s Illinois Watch Company was a nationally respected maker of timepieces. At its peak, between 1900 and 1928, Illinois Watch employed 1,300 workers, turned out 800 watches a day and was one of Sangamon County’s largest employers.

The firm was founded as the Springfield Watch Company in 1869 by entrepreneur John C. Adams of Massachusetts, who proposed the project to Springfield investors. Included were John Todd Stuart, William B. Miller, Dr. George Pasfield, John Whitfield Bunn, John Williams, and George N. Black, all of Springfield. (Some of these men later had watch models named after them, such as the “Stuart” and the “Miller.”)

The firm opened for business in 1870 in works located on 14 acres of land  between Ninth and 11th streets and North Grand and Converse avenues. The building was erected between 1870 and 1880 at a cost of roughly $100,000 and featured a clock tower that was a neighborhood landmark.

By 1873, the company employed 125 people and turned out 25 watches a day, but Springfield Watch was not established well enough to survive a national financial panic that year. Money troubles forced two reorganizations, the end result of which was the Illinois Watch Company, under new chief executive Jacob Bunn Sr. Under Bunn, the firm enjoyed growth in sales and profits and by 1880 employed 400 people.

The firm was staffed by key machinists recruited from its upstate competitor, the Elgin Watch Co. Under their direction, Illinois Watch was an innovator from the start. In 1878, the company produced the first open-face watch movement ever made in the U.S.

Master of the railroad watch

For most of its first 30 years, the company made mostly what were considered cheap and medium-grade watches. Jacob Bunn died in 1897, and vice president Jacob Bunn Jr., his youngest son, was promoted to president. During the latter Bunn’s administration, the firm discontinued manufacturing cheap watch movements and focused on timepieces fit for the more exacting demands of the railroader. 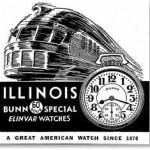 This specialty line made the Illinois Watch Co. famous wherever trains ran in the U.S. Among its best-selling railroad watches were the Sangamo and the A. Lincoln. The company advertised that one of its models, the Bunn Special, was the most popular railroad watch in the country.

A typical Illinois Watch took anywhere from eight to twelve months from the time work began on it until it was ready to leave the factory. The company’s railroad watches, among them the Sangamo, the Sangamo Special, the Bunn, the Bunn Special and the A. Lincoln, were guaranteed to be accurate within 30 seconds a week whether they were lying on their backs or their faces, standing upright or upside down and at temperatures from nearly freezing to almost 100 degrees Fahrenheit — one reason polar explorer Roald Amundsen carried an Illinois watch on one of his expeditions to the Arctic.

In about 1914, the company stopped producing anything but high-quality watches, watches with a minimum of 17 jeweled bearings. Of the 11 watch models from several factories that passed an accuracy test posed by the National Naval Observatory in Washington, D.C., 10 were from the Illinois Watch Factory. One historian of the firm noted that these timepieces were as high-tech as computers are today, and indeed the Illinois Watch Company works resembled today’s meticulously clean and well-lit computer assembly plants. 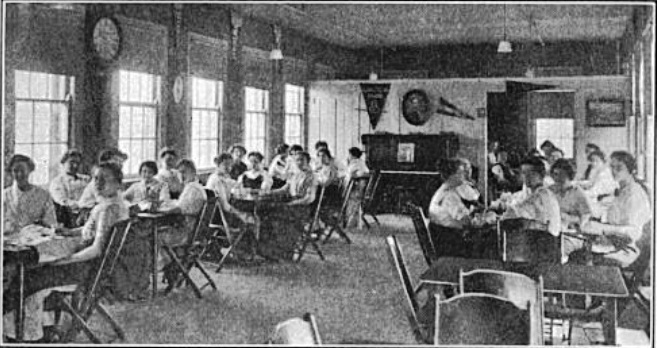 The Illinois Watch Company helped pioneer technology used to set standard time for railroads throughout the world. The company even built its own astronomical observatory, boasting a telescope, chronograph, and sidereal clock so time could be measured accurately, on the factory grounds.

Shortly after the death of Jacob Bunn Jr. in 1928, the firm was sold for $5 million to the Hamilton Watch Company of Lancaster, Pa. Hamilton shifted the emphasis at the Springfield works to wristwatches from now out-of-fashion pocket watches. Its fancy wrist watches sold well. (Some collectors regard such models as the Picadilly, Marquis, Chieftain, and Ritz to be among the finest ever made in the U.S.) By 1932, however, falling sales caused Hamilton to consolidate production in its Pennsylvania factory. The Springfield plant was closed, having made nearly six million watches in its 61 years of existence. 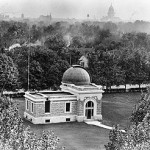 However, the former Illinois Watch by then was an incubator of other firms. In 1899, Jacob Bunn, Robert C. Lanphier, and Ludwig Gutmann incorporated the Sangamo Electric Company as a subsidiary of Illinois Watch Co. The spin-off made electrical meters. Although designated as a separate company, Sangamo Electric at first used watch company facilities, equipment and personnel, and for the first three years was referred to as the watch company’s “meter department.”

Fred Coats, who apprenticed at the Illinois Watch Co., went on to found his own watch-making equipment firms and later made automobile parts and accessories; the Coats firm became part of the John W. Hobbs Corp.

As it grew, the Sangamo Electric Co. bought the factory site and razed the old watch company buildings. The observatory equipment was sold, with one of the telescopes going to Bradley University in Peoria. That telescope was eventually acquired by a local astronomical society, which restored it, and it is still in regular use in an observatory in a park there.

An active market continues among watch collectors and restorers for timepieces made by Illinois Watch and its predecessors.

Sangamo Electric, after being purchased by the Schlumberger international conglomerate, closed in 1978. As of 2015, the Illinois Watch/Sangamo property was the headquarters of the Illinois Environmental Protection Agency. The restored clock face on the 1918 addition is about all that remains of the watch company.

If plans for railroad relocation are followed through, however, most of the facility is likely to be demolished.

The exhibit “Time to Remember,” which includes Illinois wristwatches, company documents, photographs, and related ephemera,  is on permanent display at the Farrell and Ann Gay Springfield Museum of History in the restored Elijah Iles House, 628 S. Seventh St., Springfield.

The Illinois Watch: The Life and Times of a Great American Watch Company by Frederic J. Freidberg. Schiffer Publications, 2005.

A “historical account” of the Illinois Watch Co., author unknown, was unearthed by Robert Lanphier in 1978. It has been retyped and can be downloaded here.

For information on the Sangamo Electric Co. and its products, see SangamonLink’s entries on those subjects.