James A. Stubbs (1864-1937) was a builder, brick and masonry contractor and landlord for 45 years in Springfield. His work was generally unmarked,  but many of his buildings still stand and are a distinctive part of the city’s fabric.

Stubbs, a native of England, came to Springfield from Canada in 1892. He remained an active builder and brick contractor until his death. 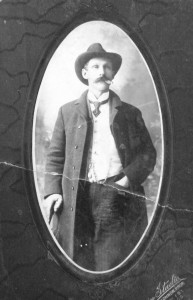 Stubbs’ firm subcontracted on many commercial structures. Some that still exist include the south front of St. John’s Hospital; Lincoln and Dubois schools; and the former Jennings Auto Sales Co. building at Fourth and Jackson streets (now an Illinois National Bank facility).

One of Stubbs’ last jobs, in 1936, was the brick masonry for the Fred Coats Watch Factory at 2220 Yale Blvd.; that building later became part of the John W. Hobbs auto accessories plant.

Stubbs also built and then rented out units in several apartment structures, including a three-story building at 710 N. Fifth St. (cited several times in Fever River Research’s report on the Enos Park neighborhood) and a structure at 1204 S. Sixth St., which was called the Stubbs Apartments and served as Stubbs’ home and business headquarters for part of his life.

However, Stubbs’ most distinctive work probably is displayed in single-family residences, like a series of homes in the 700 block of North Grand Avenue West, which Stubbs advertised as “well built brick and stone cottages, absolutely damp proof, at a bargain.” Stubbs himself lived for a time at the most imposing of the houses, the corner building at 724 North Grand Ave. W.