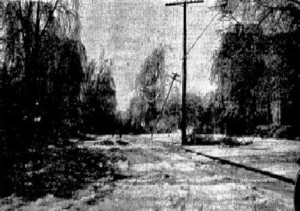 Memorable weather disasters populate a number of Sangamon County histories and reminiscences. Here are some of the most notable, as outlined in a talk to the Sangamon County Historical Society on Jan. 20, 2014 by Curtis Mann of Lincoln Library’s Sangamon Valley Collection and Illinois state climatologist Jim Angel.

*The Deep Snow, winter of 1830-31. Snow began falling in central Illinois on Christmas Eve 1830 and didn’t let up for nine weeks, according to a later memoir by the Rev. John Bergen.

*The Sudden Change, Dec. 20, 1836. John Carroll Power wrote the definitive account, citing an estimate given him by Preston Breckenridge. “… (H)e thinks a thermometer would have stood as high as forty degrees above zero, possibly higher, and that the first touch of the tempest would have brought it down to zero in a second of time.”

*Ice storm, Feb. 2-3, 1883. The Feb. 4, 1883 Illinois State Register described the two preceding days of sleet as “the Storm Phenomenal — the storm before which all others pale into insignificance …” Telephone and telegraph communication was cut off, trees were leveled, and the courthouse square and Oak Ridge Cemetery were “involved in common ruin,” the paper said.

*Tornado, May 18, 1883. Four people were killed when a tornado swept through Sangamon County south and east of Springfield. The following description comes from Sketches of Early Life and Times in Kentucky, Missouri and Illinois, a memoir written by Elijah Iles later that same year.

On the 18th day of May, 1883, the day I reached my home in Springfield from my sojourn in Florida, a terrific cyclone started two miles south of Springfield. Its track was northeast sweeping from their foundations several farm houses, leaving scarcely a vestige; two men were killed and several persons badly crippled. It struck my farm two miles east of town, and passed through a forest of lofty young timber, mostly white oak, which I had been nursing for more than fifty years. … (It) was a sight to look at. I was fond of it. After the cyclone passed there was not a large tree left standing; they were torn up by the roots, or twisted as a withe; it made me sick to look at it.

Gripped by the worst sleet storm in forty years, Springfield last night was isolated from the rest of the world.

Telegraph, telephone, light and power services were paralyzed by the storm. Homes and business houses were in darkness and in many cases without heat. Street car service was crippled almost to demoralization, and last night it was impossible for a single car to complete its run for hours because of the breaking down of wires or the blocking of tracks by falling trees. Breaking down of power lines forced the closing of schools at noon and necessitated the shutting down of many industrial plants.

… None of the telegraph companies was able to send or receive messages. Railroad wires were down, and passenger trains were operating far behind schedule.

All day, light and power employes battled the elements, while telephone and telegraph linemen fought to re-establish one shattered line only to have it fall in another place as the ever-increasing burden of sleet found another victim.

“It’s the worst storm in history,” A.D. Mackie, general manager of the Illinois Power company, said as he watched his men fight their battle to keep up the service. “… We are running cars as best we can, but every line in the city is crippled.”

… The day was, at the same time, one of the nastiest and one of the most picturesque in the city’s history. Glistening against the dun-gray sky, with their silver tinsel of sleet and ice, the trees presented as sparkling a landscape as one could wish, while street car trolleys, passing over the sleet-laden wires, sent out veritable rainbows to add color to the scene.

All through the night hundreds of families sat around the fireplaces, in the candle light, watching the scene without.

*Drought of 1953-54. Two years with almost no rainfall left Lake Springfield at its lowest point ever, prompting the first steps toward creation of a second lake as a supplemental water supply. That lake remained unbuilt 60 years later.

*”Easter ice storm,” March 24, 1978. “The winter of 1977-78 was the worst in Illinois since records began in the mid 19th century, and the resulting impacts were of record proportions in human suffering, frustrations and costs,” according to Record Winter Storms in Illinois, 1977-78, written by Stanley Changnon Jr. and David Changnon for the Illinois State Water Survey in 1978.

The worst of the winter’s series of weather calamities was what became known as the “Easter ice storm,” because it hit on Good Friday, March 24, 1978 and continued into Saturday. Some residents of rural central Illinois went without power for three to four weeks following the storm, which hit with virtually no advance warning. Damage was estimated at $15 million to $20 million, and 24 counties ultimately were declared disaster areas.

“The resulting swath of damage … was littered with uprooted trees, damaged homes and businesses, and snapped power poles,” . “The municipal power plant was knocked offline at approximately 830 PM CST and left ninety percent of the city without electricity. Nearly sixty percent of Springfield’s fifty severe weather sirens were silenced because they lacked battery backup. Miraculously, although approximately twenty people were injured, there were no fatalities.”

This entry was posted in Disasters, Early residents. Bookmark the permalink.