A mother and her baby were among victims when a tornado surprised people living south and east of Springfield on May 18, 1883.

At least four people died in Sangamon County because of the storm. Another 20-some were seriously injured, and dozens of homes, barns and other buildings were demolished. The outbreak of tornadoes killed more than 60 people in Illinois, many of them in Greene and Morgan counties, where the storms hit before reaching Sangamon County. 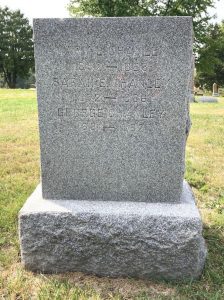 Though difficult to read, the name “Mary L. Chanley” is on the top line of this gravestone in the Mechanicsburg Cemetery. Her baby, presumably buried with her, is not mentioned, although two other Chanleys are listed below her. Their names, oddly, are on the reverse of a Hertel family tombstone. A smaller headstone with the words “Mary L” sits a few feet west of this stone. (SCHS photo)

May 18 was marked “by a strong warm wind and a very sultry atmosphere, which commenced in the morning and continued during the entire day,” the Illinois State Register reported. However, weather warning systems were decades away, so residents had only moments’ notice that a tornado was headed their way.

The Wilfong family, who lived a couple miles south of Springfield, had a typical experience. Four people were in the house when the storm struck in early evening, the Illinois State Journal said in a special report on Monday, May 21.

The children, being frightened at the glare of lightning, had been put upon the bed in the sitting room, and the father and mother also laid down with them. Mrs. Wilfong happened to think of an open window in the kitchen and got up to close it. She went to the kitchen door to look out and did so in time to see the barn blown away. An instant after, she was standing upon the ground where the kitchen had been. The other part of the house fell towards the north and in absolute ruin. The roof was resting upon the bed, and the rafters passed only a few inches above the head of the children. The smoke-house standing near was taken away, but the barrels which were around it were not moved. A chicken coop stood about 10 feet south of the house, in which were two chickens. They were still there in the morning, the coop not having moved an inch.

The storms largely missed Springfield itself, swinging from Iles Junction (then south of city limits) east to the Round Prairie neighborhood along Cook Street Road, “where it occasioned widespread desolation,” the Journal said.

That’s also where two of the four fatalities took place. Thomas Barbre (misspelled “Farbree” in Journal coverage) got his family into their cellar just in time.

“Mr. Farbree attempted to follow,” the newspaper reported. “It was too late. With a roar and rush that resembled the speeding past of a heavy express train, the cyclone struck the building. In a moment the ruin was complete. … (Barbre) was found a few yards distant from the cellar door buried beneath piles of rubble.”

Five people were in the Van Nostrand home farther north and east. Only one, “hired boy” Henry Hulit or Hulett, reached the cellar. “The Van Nostrands were not so fortunate,” the Journal said. William Van Nostrand died, crushed by the house’s collapsed roof, and his mother Jane and sister Maggie were both badly injured. 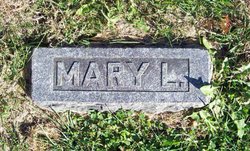 The storm continued eastward, destroying farms and homes as it went. Two miles northwest of Buffalo, Mary Chanley was recuperating from the birth of her third child when the tornado struck.

Thomas Chandley (sic) … suffered not only the loss of property, but the death of his wife and one child also. His house was blown to pieces, and his barn completely wrecked. Mrs. Chandly (sic) was blown some distance from the house and dashed to the ground with violence, an arm being broken and her breast bruised so badly that she died at 2 o’clock at night. Her babe, a week old, was wrested from her arms and carried a long distance and was so seriously hurt that it also died Saturday forenoon.

Two other children were blown into an adjacent field, and their bodies and faces so completely pelted with mud and dirt that after all efforts to remove the stains they resembled bronzed people. The earth was as firmly imbedded in the skin as if it had been tattooed there.

At points, the cyclone winds were accompanied by electric phenomena, the Journal reported. William Cantrall near Round Prairie “was burned about the face, neck and hands by sparks of fire, which danced through the air in every direction,” the Journal said. “These were thrown off from a ball of fire, which seemed to burst directly over the house.”

And along the Wabash railroad between Buffalo and Dawson, when the tornado struck the ground, “it left a perfectly visible electric current in its wake, which baked the plowed land for some feet in width and parched the grass and crops.”

Storm damage was both chaotic and random. “Quails, bluebirds and chickens were found along the route of the storm completely plucked, and many hogs were killed outright,” the Journal said.

On the other hand, according to the Register, 13 dairy cows belonging to J.A. Page on the Rochester Road “were transported by the wind over a gully and through a field to a pasture almost a mile from their former position. Several were lame yesterday, but beyond that they were uninjured.”

The Register had a surprisingly complete story in the paper’s May 19 edition, even though reporters had to follow the storm’s path by horse and buggy, often forcing a path in total darkness through downed trees, uprooted fence posts and general debris.

“In making notes Friday night of the storm, the Register reporter who went to Round Prairie kept a cigar burning all the time and, by the fitful lightning’s glare and the glow from the cigar coal, jotted down his notes in the rain and wind,” the paper said.

Both newspapers marveled at the devastation and capriciousness of the storm. “Language is not adequate to the occasion,” the Register said May 20. “… (T)he homes desolated and the treasures of memory and of love destroyed can never be replaced even to those who did not lose a friend or relative in death.”

The Journal concluded May 21:

The stories told of the remarkable character of the storm are not expected to be believed except by those who have witnessed some portions of its effects; and yet all may be strictly true and not in the least exaggerated. …

A chapter of curious incidents could be recited, showing the miraculous character of escapes from death. The wonder, to those who have visited some of the wrecks, is how any of the inmates of the houses survived.

Mary Chanley (1852-83) is buried in the Mechanicsburg Cemetery. Her baby – whose name and gender weren’t mentioned in newspaper stories – presumably is buried with her, although there’s no indication of that at the cemetery. William Van Nostrand’s grave is in the Rochester Cemetery, while Thomas Barbre reportedly was interred at Calvary Cemetery in Springfield.

1 Response to Round Prairie tornado, 1883