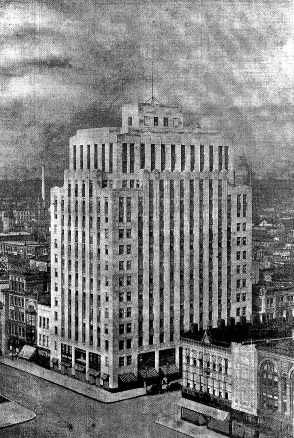 The utility company now part of the utility conglomerate Ameren Illinois was founded in Mattoon as an electric streetcar line in 1902. The firm eventually moved into other businesses — electric generation and distribution and delivery of  natural gas, water and ice — and adopted the name of Central Illinois Public Service Co. in 1910.

In a profile of the company published on Nov. 28, 1920, Illinois State Journal reporter Nellie Browne Duff outlined the breadth of its businesses:

Putting the facts into figures, then: The Central Illinois Public Service Company now serves 184 communities, supplying this entire number with electricity, 8 with gas, 12 with water, 12 with ice, 9 with steam heating, 5 with street railway service, and connects a number of cities by interurban service.

In addition, the company serves 45 coal mines and 3 oil refineries with all or part of the electric power used by them

The territory covered by the activities of the Central Illinois Public Service Company extends into 44 counties, as far north as Iroquois county in the east and Warren county in the west, and clear down to Alexander county, in the southernmost tip of the state.

Continuing expansion led CIPS to replace the old Farmers Bank with a new, 15-story structure, the Illinois Building. The Art Deco-influenced building, then the largest office building in Illinois outside Chicago, opened in August 1931. The Aug. 23, 1931, Illinois State Journal was impressed:

Following the lines of contemporary American architecture, the style of the building may be described as cosmopolitan. …

The entrance … brings one directly into the spacious elevator lobby. The lobby walls are lined with richly colored marbles in pleasing harmony with the decorated ornamental ceiling and marble floor. On two groups on either side of the lobby are four high speed electric elevators of the latest design.

The first and second floors of the building are devoted to space for business and commercial enterprises, (with) the other floors, with the exception of the fourteenth and fifteenth floors, being given over to offices. The two top floors house the Sangamo Club, which just recently moved from its old quarters at Fifth street and Capitol avenue. …

Each office has a Sangamo electric clock. … Hot and cold water is available for all offices and rest rooms for men and women are located on alternate floors

Another unusual feature for tenants of the Public Service building is the parking privilege provided in the basement and sub-basement by means of a ramp garage. This is the only parking arrangement of its kind found in the state outside of Chicago.

Another feature is the floodlighting system which illuminates the building nightly. These lights, visible for miles in any direction from the city, are the first of their kind in this city and are considered one of the outstanding examples of floodlighting in the middle west.

The S.A. Barker women’s clothing retailer, which moved into the first floor when the Illinois Building opened, was for many years its most visible tenant aside from CIPS.

Burdened by debt as the Great Depression began — partly the result of the Illinois Building construction — CIPS gradually divested itself of its other businesses and, by 1948, had become strictly an electric utility.

In 1997, CIPSCO, by then the CIPS holding company, merged with Missouri’s Union Electric to form the St. Louis-based Ameren Corporation. CIPS and two other formerly independent downstate gas and electric utilities, the Central Illinois Light Company and Illinois Power, now make up Ameren Illinois; the former CIPS operation had 400,000 electric customers and 190,000 natural gas users as of early 2014.